In the rest of the EU, the main strength of Germany’s economy is often considered to be its dense fabric of exporting SMEs, sometimes known as the Mittelstand, which has remarkably resisted the crisis. When so many European leaders talk of reindustrialisation and promotion of local SMEs, it might be worth analysing the financial environment for small firms in Germany. To try to understand the world of German finance, our guest blogger Fabien Hassan, who is presently living in Berlin, takes a look at the financing of the German economy.

The importance of the German ‘Mittelstand’

Financial crises are crises within the financial industry. Obviously, they have an impact on the real economy, but that impact is not immediate. For a given shock in the financial sector, the shock caused to the economy will depend on what economists called ‘transmission mechanisms’. Among those, the main mechanism is a credit crunch. Faced with difficulties, banks will stop lending money to firms, which will be forced to give up on potentially profitable investments. The phenomenon primarily affects small and medium enterprises (SMEs) since they typically have a less diversified access to financing.

The main strength of German economy is the so-called ‘Mittelstand’, a dense fabric of SMEs that manage to export high-quality manufactured products. In France, policymakers from all parties are obsessed with building a ‘French Mittelstand’. Economists are repeatedly asked to produce reports on what France could do to foster its SMEs the way Germany does (see for ex. Kohler D., Weisz J.-D. & FSI, 2012). At first glance, it does seem that the Mittelstand has done quite well throughout the financial crisis. This implies that German SMEs have enjoyed continued access to affordable financing since 2008. Indeed, at the macroeconomic level, studies show “no signs of credit crunch” (Ziebarth, 2013, see also Friderichs & Körting, 2011).

Of course, it would be naïve to think that German firms never have trouble financing credit-worthy activities. According to a 2011 survey on a sample of 1,139 firms from the manufacturing sector, “among the firms that negotiated a loan or a line of credit in 2008 or later, 31 percent reported credit financing impairments arising from the financial crisis” (Hainz & Wiegand, 2013). The following graph illustrates the varieties of difficulties encountered by German firms seeking credit during the crisis. Since those figures are based on declarations by firm owners, they are to be interpreted cautiously. 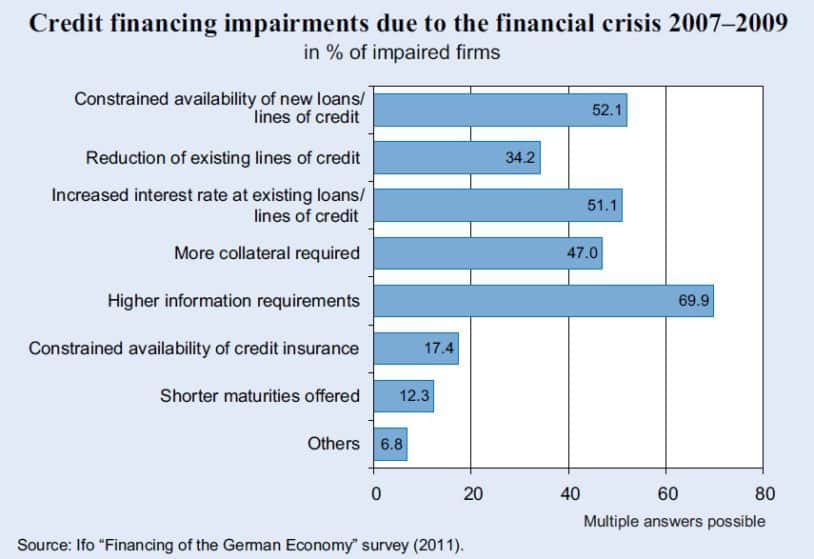 Despite those problems, during the crisis, access to financing was possible at “historically low rates” for German firms (Ziebarth, 2013). Thus, there might be lessons to be drawn for European policymakers who are interesting in improving the financing of the EU economy. More specifically, German SMEs are well integrated in supply chains and Germany has a very specific banking system, with an original three-pillar structure comprising private commercial banks, public savings banks and cooperative banks (see previous article).. Does the generalised access to funding from public and cooperative banks constitute a competitive advantage for German firms?

The ‘main bank’ scheme of financing

Detailed quantitative analyses of access to financing since the crisis are available (Friderichs & Körting, 2011, Deutsche Bundesbank 2012 & 2013). They conclude that beyond external financing, an important element is self-financing. Many medium-sized German industrial firms produce high-quality products sold with comfortable margins, which allow for high levels of savings. Finally, family shareholders are happy with low levels of dividends, because they worry about leaving enough money in the firm for future investments. Germany enjoys a business culture environment that favours long-term investment.

If we are to focus on credit, it seems important to describe the typical pattern of relationships between firms and banks in Germany. The key concept there is the ‘Hausbank’, literally the ‘home bank’. It designates the main bank of a firm, which is responsible for the provision of core financial services (deposit taking, payment, lines of credit). Further services like asset management, capital markets operations, and mergers and acquisitions are often provided by other financial institutions. The system of the main bank is almost universal in Germany. “Only 4.8 percent of the firms do not have a main bank” (Hainz & Wiegand, 2013).

The word home is not merely anecdotal: home banks are “characterised by a long duration, personal support and a small distance between the bank and the headquarters of the firm” (Hainz & Wiegand, 2013). In practice, long duration means an average business relationship of more than 20 years with the main bank.

For small firms, in most cases, the main bank is the local and regional savings bank – Sparkassen and Landesbanken, or a cooperative bank. According to Frank Eloy, member of the board of Landesbank Saar, “public-owned banks play the role of main bank for around 44% of German firms” (Eloy, 2013). On the other hand, bigger firms with weaker local attachments would prefer big commercial banks, which are better suited to fulfil massive capital needs, provide worldwide services, and offer a wide array of complex and personalised financial products.

A broad array of opportunities

From the point of view of SMEs, the risk of relying on a single financial partner is overdependence and reduced competition. But German firms seem to be aware of that risk. Therefore, they usually build relationships with two or three banks, in addition to the main bank. “Firms in the sample tend to diversify their business relationships to banks, but at the same time maintain a small core of close long-term main bank relationships” (Hainz & Wiegand, 2013). This strategy proves efficient because it combines the advantages of a trust-based relationship and those of market competition.

Major private commercial banks keep on denouncing ‘unfair competition’ from public banks, which they say benefit from cheaper funding thanks to explicit public guarantees (although large private banks enjoy a similar benefit from the implicit guarantee that comes with being “too-big-to-fail”). The truth is, Sparkassen sometimes favour competition. They only provide specific services in specific areas. So whenever a client requires a service that the ‘main bank’ cannot provide, the main bank itself will search the best opportunities available from the regional Landesbank, private banks, foreign institutions, or suggest a different scheme of financing. The ‘main bank’ does that for two reasons: it does not have to maximise its profit, and it has an interest in preserving its long-term relationship with SMEs. That is a big difference with universal private banks, which will always tend to promote in-house services.

The importance of local economic ties

Another frequent feature of main banks is proximity. In Germany, Sparkassen still function on a local basis. So they are structurally prevented from certain kinds of pro-cyclical credit-granting behaviour. A pro-cyclical action is an action that tends to reinforce existing tendencies in the economy. Imagine that a country is experiencing economic difficulties. In a global bank, managers will cut the credit provided in that country, reducing the volume of money available there, and focus instead on faster-expanding economies, thus making the crisis even worse.

A Sparkasse simply cannot do that. It will necessarily have to find a way to continue to grant loans on a local basis. “Banks, which normally develop relationships with professional clients for years, are already prepared to give out credit in such a situation” (Die Zeit, 2011). Also, Sparkassen and Landesbanken are legally bound to pursue public interest goals, and to correct market failures. In times of crisis, they are all the more ready to support the economy.

Thanks to their involvement in the local economy, Sparkassen are undoubtedly popular. But they are also very powerful. Before he became President of the Federal Republic of Germany (2004-2010), Horst Köhler was the head of the professional association of Sparkassen, DSGV (1993-1998). Local banks have been criticised for being too close to conservative parties, the CDU and CSU. In fact, since they belong to cities and regions, they are intrinsically connected to whoever is in power. German newspaper Die Zeit called DSGV the ‘black power’ and described it as the most powerful bank lobby in Europe. Another association called VÖB represents German public banks. It regularly publishes statements on regulatory projects and has eight permanent employees in Brussels for lobbying purposes (VÖB, 2014).

Popular yet powerful, Sparkassen are sometimes instrumentalised: bank lobbyists throughout Europe know that they have a better chance of imposing their ideas if they can show that a regulation also hurts Sparkassen, for example in the debate over higher capital requirements. In a common statement published in view of the European elections, public and cooperative banks actually claim that: “Undifferentiated rules hurt small and medium institutions proportionally stronger, and hinder their important role in financing small and medium enterprises”. According to them, Germany has a peculiar banking system which has proven valuable and deserves to be protected, but through differentiated rules, not through deregulation.

To sum it up, the German system of bank credit is efficient. However, that efficiency needs to be put in context. German firms benefit from a structural advantage: they are much less dependent on bank credit than their European counterparts, thanks to higher savings which enable self-financing. They also have the possibility to use typical German debt instrument – Schuldschein. And they benefit from a temporary advantage: since the financial crisis, Germany is considered as a ‘safe haven’ by investors from the whole word, so interest rates tend to be lower than everywhere else in the EU.

Is the EU learning from the German model?

In 2013, the European Commission published a Green Paper on long-term financing of the European economy. A lot of stress was put on SMEs, which “have historically faced significant difficulties in accessing funding to grow”. The Green Paper insisted on the necessity for firms to diversify their sources of funding. “Looking beyond the financial crisis, an important question is whether Europe’s historically heavy dependence on bank intermediation in financing long-term investment will give way to a more diversified system with significantly higher shares of direct capital market financing and greater involvement of institutional investors and alternative financial markets” (European Commission, 2013).

Why did the Commission not put forward the German model based on local relationship banking and vertical integration of SMEs? Understandably the Commission is a European institution, whose aim is to promote an integrated financial market. It cannot do with a situation where SMEs “are now faced with fragmented financial markets in the EU, as access to finance conditions vary considerably from country to country” (European Commission, 2013). The German system, which relies on geographical proximity, local culture and state intervention, is not perceived as promoting the single market.

Yet the promotion of capital market financing for SMEs raises several concerns: access to equity and bond markets is expensive for SMEs. SME loan securitisation is too costly to be viable economically without public support and might also foster reliance on external credit assessment. It is also not clear that capital markets will address fragmentation, as investors will take into account in their lending decisions local economic contexts and national sovereign risks just as banks did.

At a time where Europe is making important choices on its future funding model, more attention should therefore be given to the German approach.

Health crisis: Credit is not the solution to the financial problems of precarious European households