The Corporate Europe Observatory (CEO) is a non-profit research and campaign group whose declared aim is to “expose any effects of corporate lobbying on EU policy making”. It is based in Brussels.

The role of tax planning intermediaries and accountancy networks sits at the heart of a deeply political issue, one fundamentally about justice, equity, and democracy. Financial opacity is one of the key drivers of rising global inequality. And the Big Four have a wider responsibility for fuelling financial instability and inequality. They had a key role in the financial crash of 2008, failing to ring the warning bell about banks they audited, signing off on their accounts just months before their collapse triggered years of austerity across Europe.

In this blog article, Corporate Europe Observatory’s Vicky Cann summarizes the findings of their new report “Accounting for influence” showing how the Big Four global accountancy firms are embedded in EU policy-making on tax avoidance.

We pay our taxes. So why don’t corporations? Billions of euros are lost each year due to corporate tax avoidance, depriving public budgets of much-needed resources to fund education, health care, social services, and much more. A study for the European Parliament has estimated that corporate tax avoidance costs the EU between €50 billion and €70 billion a year – and could even be as high as €160-€190 billion. 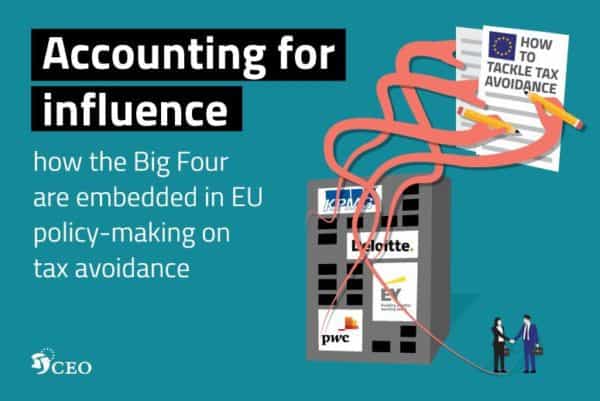 A new report by Corporate Europe Observatory shows that the Big Four are omnipresent in the European Union’s policy processes for tackling corporate tax avoidance and they work through several channels of influence. These include:

Just one example of this influence in action is the intensive lobbying by the Big Four and big business interests against public country-by-country reporting. This EU proposal dubbed “public CBCR” would require corporations to publicly report their profits in every country in which they operate, to avoid their use of loopholes to shift profits to tax havens. Ahead of the Commission’s proposal, the Big Four lobbied fiercely to prevent the mandatory publication of this information, with EY citing “commercially sensitive information” and Deloitte pushing a ‘voluntary’ approach. Many big business lobbies repeated similar messages.

However, the public outrage surrounding the Panama Papers in April 2016 put tax transparency high on political agendas across the world, including in the EU, where this meant the final CBCR proposal from the Commission was stronger than expected. Industry efforts then focused on the European Parliament which, following a barrage of corporate lobbying, included a get-out clause in the draft that allows corporations to keep “commercially sensitive” data secret.

Some of the most vehement efforts to undermine public reporting came from members of the Commission’s advisory group, the Platform for Tax Good Governance: the American Chamber of Commerce to the EU (AmCham EU), BusinessEurope, German business lobby BDI, and its French counterpart MEDEF. AmCham EU, which argued that public reporting would harm companies’ competitiveness and Europe’s “attractiveness” for investment, has PWC and Accountancy Europe driving its tax policy positions. The latter was supportive of public reporting, but only if it minimised “the risk of disclosing economically sensitive information”. Arguably, the get-out clause established by members of the European Parliament achieved this aim.

Now the public CBCR file is under discussion by the 28 member states in the EU Council, and there are concerns that it may be further weakened or even indefinitely delayed. While some states such as France, Belgium, and the Netherlands have expressed support for the proposal, others including Austria, Cyprus, and Luxembourg are opposed, with key countries like Germany yet to express a view.

Given all the evidence of the role that accountancy firms like Deloitte, EY, KPMG, and PWC play as advisers that facilitate and profit from corporate tax avoidance, it is remarkable that they continue to be treated as objective and legitimate partners in policy-making circles. It is time to kick the Big Four and other players in the tax avoidance industry out of decision-making processes for EU anti-tax avoidance policy. This must start with recognising the inherent conflict of interest that lies in allowing tax intermediaries to advise policy-makers on how to tackle tax avoidance. Only then can an effective framework emerge which ensures public-interest tax policy-making is protected from vested interests. 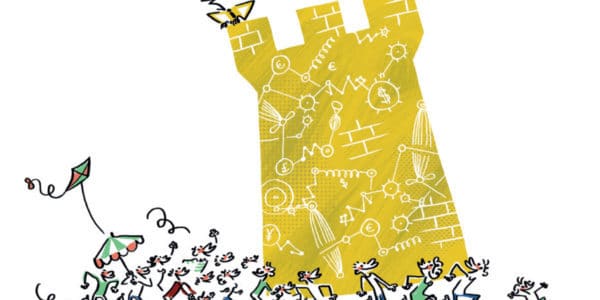