How do you end the feedback loop between sovereign states and their banks? As the Eurozone charts a course towards full banking union, it is a question on many people’s lips.

The recent European summit offered some answers. Eurozone leaders agreed to let rescue funds be paid to Spanish banks directly instead of via the government, removing the weakened sovereign from one step in the loop, and paved the way for ECB supervision. Eventually, banking union could help federalise domestic banking problems, spreading local damage more evenly among Member States.

But while these would reduce the interdependence, they only look at one end of the link, namely at what happens when a bank needs bailing out. To address the problem at source, regulators need to look at why banks have been so willing to finance the public debt through their holdings of sovereign bonds in the first place. In all the excitement about banking union there has been little discussion about why banks play this role as they do.

Among the regulatory incentives that banks face, two stand out. The first is the zero weighting of sovereign debt under Basel II and now Basel III under its so-called standardised approach, which allows banks to lend to sovereigns without any capital at all. In theory, banks can hold an infinite amount of sovereign debt, subject to funding. The second incentive is the LTRO, which makes cheap ECB funding available expressly to help banks buy, among other things, higher yielding sovereign bonds.

We can expect that, as an emergency measure, LTRO funding will not become a permanent feature of Europe’s banking landscape, especially now that the ESM can buy sovereign bonds directly. The same cannot be said of the capital incentive, which has been a central feature of Basel for years.

In 2011, the EU briefly discussed ditching the zero risk weighting of sovereign debt as part of its implementation of Basel III. An early compromise text circulating in the European Council working group contained the following draft Article:

Exposures to governments and central banks

1.         The Commission shall submit by 31 December 2014 a report on the impact and effectiveness of the application of a 0 % risk weight on exposures to governments and central banks in the standardised approach to the European Parliament and the Council. The report shall if appropriate be accompanied by a legislative proposal on the introduction of higher risk weights on such exposures.

2.         For the purposes of paragraph 1, the EBA shall report to the Commission by 30 June 2014 on the level of counterparty risk inherent in the exposures referred to in paragraph 1.

The article called for a review of zero-weighting by the end of 2014, with the possibility to start introducing risk weights for sovereign exposures after that.

Unfortunately, when the Eurozone crisis worsened the provision was deleted and a different text appeared:

By June 2014, the European Commission shall, after consulting ESRB and EBA, review whether the macro-prudential regulation contained on [CRD/CRR IV] is sufficient to mitigate systemic risks in sectors, regions and member states in the European Union including assessing;

a) whether the current macro-prudential tools in CRD/CRRIV are effective, efficient and transparent

c) whether the coverage and the overlap of the macro-prudential tools in CRD/CRR IV are adequate and, if appropriate, propose new regulation taking into account theses internationally agreed standards.

The new text provides for a general purpose review without any specific mention of sovereign capital weightings. If the EU is serious about ending the feedback loop between sovereigns and banks at source, it needs to revisit this and look at ways to end the capital incentive. With something like EUR 1.5 trillion of EEA sovereign exposures among Europe’s banks, it won’t be a popular task or an easy one and it would also need a serious transition plan, possibly with ECB recapitalisation measures. But there are good reasons for doing it.

The policy reasons for ending zero sovereign weighting are worth repeating.

If the goal, therefore, is to weaken the feedback loop between banks and sovereigns, it will need actions that treat the issue at source, with an end-date for zero weighting of sovereign debt high on the list (as Finance Watch recommended in “To end all crises?”). It might also be time to take a hard, honest look at the role of commercial banks in financing public debt with a view to ensuring that, if this is to continue, banks are structured and accountable for the task and that they have enough capital to stand on their own feet when things go wrong.

A plan to introduce capital requirements for sovereign debt would need several features: it should recognise the impact on strong banks as well as weak, on Germany as well as the Eurozone periphery, and it would follow a timetable that minimises cliff effects and deleveraging.

A speedy option would be for the ECB to recapitalise banks that have significant sovereign exposures (in return for suitable conditions), which might have the beneficial side-effect of accelerating the recovery of interbank and real economy lending.

In conclusion, if the EU wants to untangle the feedback loop between sovereigns and banks, there are a few steps it could consider adding to its plan: 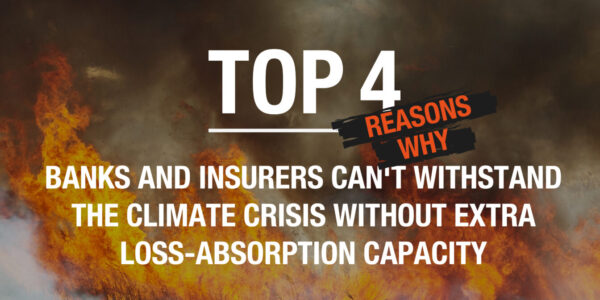