Big banks (Too-Big-to-Fail) are allowed to use their own models to determine their regulatory capital = the minimum amount of their own money they should use to fund their investments. It has been evidenced that some banks make over optimistic assessments, leading to insufficient capital and ability to absorb potential losses.Small banks, on the contrary, use a standardised approach which is stricter, less susceptible to gaming, and thus places them at a disadvantage compared to larger rivals. 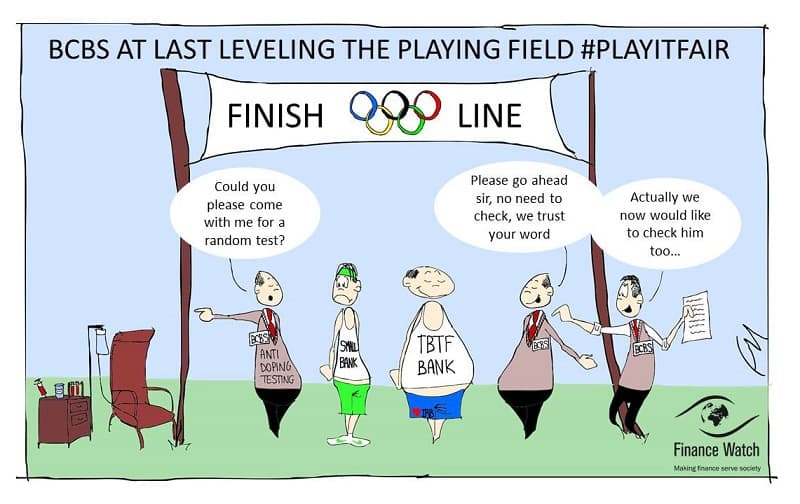 Having recognised the problem, the Basel Committee on Banking Supervision (BCBS) has decided to reduce the allowance to use internal models. Some bank trade associations have been very vocal over this initiative, calling it misleadingly Basel IV, implying that this would be a new version of bank prudential regulation Basel III, when it’s only really a partial fix of well-known issues rather than new standards. They claim that this would increase regulatory capital requirements for banks and, as a result, lead to a decline in lending to the real economy.

For Finance Watch, nobody should buy into the biased narrative that making our banking system safer will lead to a decline in lending to the real economy. Given the enormous cost of banking crises, we should prioritise financial stability over short-term profitability. Big banks need to play it fair!

Also, take a look on our other cartoon on the subject:  Fixing Basel III doesn’t make it Basel IV #PlayItFair

To read more on our position: http://www.finance-watch.org/hot-topics/blog/1267-basel-iv-blog-june2016