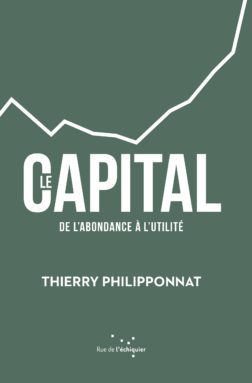 Photo by Wilson Ye on Unsplash

When a number of us started Finance Watch six years ago, the topic on the public agenda was the regulation of a financial system whose malfunctioning had been epitomized by the crisis of 2007 -2008. Working to make financial regulation take into account the interest of society is what triggered the creation of Finance Watch, what motivated us and what we worked on for years.

Six years on, societal momentum has changed and “making finance work for society” is, in my view, no longer only about fixing a crisis or fine-tuning the rules that apply to the various players of the financial system but also, and perhaps more importantly, about thinking of the way to design a financial system that will contribute to building a sustainable world.

The book I published recently, “Le capital de l’abondance à l’utilité” (Editions Rue de l’échiquier) is a reflection on the conditions that need to be put together to build a sustainable financial system. It starts with an analysis of the reasons why the enormous amounts of money that have been created over the past ten years seem to have reached only at the margin the productive economy. Where has the money gone? Why is monetary capital not systematically converted into financial capital and financial capital not always converted into productive capital? The answer to this question can be found by comparing the financial system with a water pipe: at one end of the pipe, money is created but only a small fraction of the money created reaches the other end of the pipe – the productive economy – because of the many leakages. Money (the water) is diverted from its destination because of leakages in the pipe.

The causes of the leakages I give in the book will not surprise readers familiar with Finance Watch literature apart, perhaps, on the topic of speculation. I consider that speculation is not the main problem as it has always existed and has a natural tendency to regulate itself through the simple fact that there is a limit to the amount of direct risk a speculator can take.[1] Instead, I see the purpose of financial products as the main question: are financial products and financial services designed to serve the economy? The answer is sometimes yes and sometimes no and, when the answer is no, capital stands no chance to ever reach a productive phase.

The book then looks into the situations where capital is invested in financial products designed to serve the productive economy and tries to analyse whether this right intention is sufficient to allocate capital effectively and sustainably to a rapidly changing economic world. The heart of the capital allocation machine of the investment world is the Capital Asset Pricing Model (CAPM). Despite the fact that the fathers of CAPM  (William Sharpe, Eugene Fama and Harry Markowitz) all received a Nobel Prize in economics, I consider that CAPM is a deeply flawed model as it defines risk as the fact of diverging from the crowd. I explain in the book why this characteristic of CAPM makes it incompatible with investing in a rapidly changing world.  CAPM and the investment practices derived from it – passive investing, active investing benchmarked to stock indices with a small tracking error… – lead to a world where the investment function consists of replicating yesterday’s economic world instead of allocating capital to tomorrow’s economy.

The generalised use of CAPM and CAPM-based investment strategies has enormous consequences on the ability of the investment community to allocate capital to a sustainable world. For instance, the technical reason behind the decisions of many investors to stop investing in coal-related assets is that coal and coal companies are largely absent of major stock market indices and that, as a consequence, not investing in coal assets creates no, or negligible, tracking errors between investment portfolios and their benchmarks. Conversely, the weight of oil companies in major stock market indices is often comprised between 10% and 15%. This means that an investment portfolio built without investing in oil stocks would have a significant tracking error vis a vis its benchmark, a situation considered as not acceptable by most institutional investors. This explains why large investors have been deaf to oil disinvestment campaigns when they have been listening to coal disinvestment campaigns. Beyond the environmental arguments and the economic analysis of what constitutes a good investment or not, general acceptance of CAPM has contributed to build a system where distinguishing an investment portfolio from the crowd is considered as not acceptable.

The momentum today is in favour of index replication despite the obvious contradiction in terms represented by the so-called passive management of assets.  Looking beyond today’s momentum, I argue that active investors will derive in the medium to long term better returns than passive managers in an economic world that will be characterised by low growth rates combined with a greater dispersion of economic performance between sectors and enterprises.

When invested in the economy and managed actively, capital can be not only a factor of production but also a source of progress for society. This is what sustainable finance and responsible investment are about. For sustainable investors, integrating environmental, social and governance criteria into investment decisions is not only compatible with sound financial management but it is also a prerequisite to it: how could an investment process that, by nature, has a long time horizon be even possible without factoring in externalities and the interest of society? Economy and ecology, with their very close Greek etymologies, can only go together and are the conditions of the future prosperity of our societies.

All in all, the book takes capital for what it is, i.e. neither good nor bad but just a tool made to achieve a bigger purpose called sustainability and financing a changing world.

“Le capital de l’abondance à l’utilité” can be read as an analysis of the link between finance and the economy, as a description of an important trend towards a sustainable approach of financial investment and as an attempt to understand the technical prerequisites to making sustainable investment a mainstream practice.

[1] Editor’s note: Finance Watch’s view is that a moderate amount of speculation is a natural and useful part of most financial markets, but excessive speculation can hurt price formation and lead to problems including resource misallocation, short-termism, extraction, asset price bubbles and systemic risks. And arguably, today’s financial markets are dominated by speculation. We therefore favour regulation that seeks to prevent excessive levels of speculation, for example by preventing speculators from transferring risks to society at large.