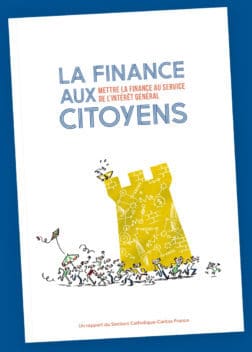 Founded in 1946, Secours Catholique – Caritas France is a service of the Catholic Church and a member of the Caritas Internationalis confederation. It unites a network of 67 900 volunteers, “bringing help either direct or indirect, moral or material aid wherever there is a need for it, with the exception of any distinctive national or confessional religious identity, irrespective of the philosophical or religious opinions of the beneficiaries”

“The functioning of the financial system is not in line with the general interest” – The statement could have been attributed to Finance Watch or organisations working on economic analysis. But, this time, it is a major religious charity, Caritas France (a founding member of Finance Watch), usually focusing on inequalities and poverty, that documents this diagnosis in a well-explained, very documented 150-page report.

Regulating finance is a necessity for all

The power of financial markets in shaping our societies wouldn’t be much of a problem without the flaws of the current rules of the game. But as it is, the secondary effects of volatility, short-termism and blindness to the common interest of internationalised finance are becoming the most notable, primary consequences of its increasing domination.

Evidence of direct links between the current tsunami of financialization and the worldwide increase of inequalities, environmental pressure or democratic denial are multiple. Yet, #10YearsOn from the worst financial crisis of modern history, the tide is turning. Our politicians, in a desperate (and doomed) quest for competitiveness are begging for international investments and deregulating finance at the cost of their public wealth. The rating agencies have become conductors of western public policies. 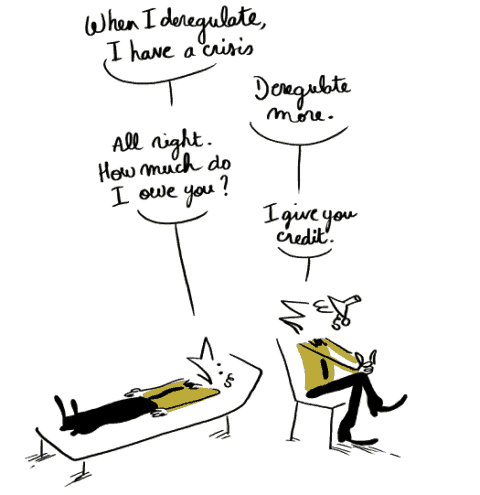 Credit: One of the 20+ illustrations in Secours Catholique “Finance for citizens” report

At Finance Watch, we agree with Caritas France that fine-tuning the system is not enough: we need fundamental change in finance and its policies. Measures such as bank separation, higher capital requirements, regulation of shadow banking, credit guidance, carbon pricing, diversity of bank‘s business models, and more accountable regulators are long overdue.

For, even though the necessity to regulate finance is greater than ever, our capacity to do so is diminishing: the ever-growing complexity of financial markets slips away from the hands of policy-makers. Armies of lobbyists (1700 in Brussels, 4 times the number of EU public agents working on financial regulation, 200 times the staff of an NGO such as Finance Watch) haunt the corridors of power, undermining overnight every line of each hard-won political success. Civil society is weakened, reacting to the post-crisis diminution of public financial resources with a refocus on their core missions.

Finance is the blood of our economies. It creates and channels financial resources towards economic actors that need it. While it is now a part of some of the major problems of our century (inequalities, climate etc) it could be part of the solution. How?

First of all, we need to explain how finance works, and break its aura of complexity. If some of its details are indeed very complex, the overarching device is easy to apprehend and the main levers of change are well understood. Having citizens and policy-makers understanding how finance works is a first step towards change.

Secondly, we need to involve the stakeholders of societal fights in this re-regulation advocacy effort. If defenders of the environment or of the developing countries do not appropriate this challenge and do not work on the links between financial regulations and their own problems, our advocacy will remain too weak.

Finally, we need to mobilize. The balance of power is such that without a major shift in the public opinion (such as what happened with climate change over the last ten years), politicians won’t be able to hold the most-needed hard lines in regulating finance: Caritas France’s report comes along with an online campaign for citizens to request their MP to act, echoing Finance Watch’s next campaign to #ChangeFinance. Together with about 50 other European organisations, we aim at gathering people in the streets on the 15th of September 2018, #10YearsOn from the crisis. By doing so, we will collectively refuse the “Job done” rhetoric used by the policy-makers and remind our leaders that we are still paying for the last crisis.

For all these reasons, Caritas France’s major report is unprecedented: it ticks all three boxes and leads the way. With this report, finance isn’t anymore this expert-only, inaccessible thing. Non-specialist civil society is appropriating the questions of finance and joining the fight. More importantly, citizens are able to do something about it. Finance Watch is proud to have participated in the creation of this document and will relay its analysis, mobilisation tools and outcomes in the coming months. We strongly encourage other civil society organisations across Europe to follow Caritas France’s tracks and add to their weaponry the financial regulation side of their own fights. Finance Watch and its European network of partners is ready to help to make it happen and carry the outcomes of such efforts before EU regulatory institutions.