After years of warnings on the tremendous macro-economic consequences of the unfolding climate crisis[1], financial supervisors are finally acknowledging that regulatory action on climate risks is a necessity in order to fulfil their financial stability mandate[2].

Indeed, by financing the fossil fuel industry, financial institutions create both micro prudential risks and macroprudential risks in what Finance Watch calls a “climate finance doom loop” (see infographic below). Fossil fuel finance is a risk for financial stability that unequivocally fits under the current mandate of supervisory authorities.

As expected, and given their influence on the conduct of financial markets, supervisors and regulators are opting for a cautious approach to tackling the problem of climate risks. But the very nature of their actions shows that they don’t take into account the “tragedy of the horizon” inherent to the impact of the climate crisis on the financial system.

If the Bank of International Settlements itself has described[3] how climate-related extreme events of increasing frequency called “Green Swans” would be a) of systemic importance, and b) impossible to quantify, they omit to reiterate that the “tragedy of the horizon” structurally prevents market participants from incorporating the real cost of sustainability risks in their operations.

Yet, so far, the entire toolkit on which they base their actions is built on the following assumptions that are entirely contradictory to their own diagnostic and that of the “tragedy of the horizon”: 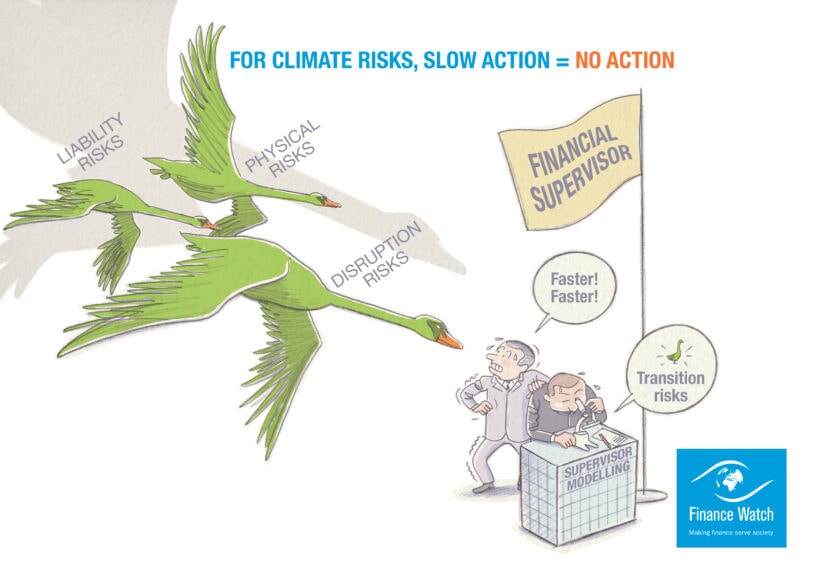 In this context, the slow – and market-based – set of measures currently contemplated by supervisors very much looks like a dangerous game of procrastination in the face of the biggest threat financial stability ever faced. The outcome of their action is likely to be the exact opposite of the one they seek if extra steps are not undertaken urgently. In a context of shrinking carbon budget and of massive support of the fossil fuel industry  by the financial sector[4], every lost day increases the systemic risks of the climate crisis.

It is time for regulators to stop shying away and to make use of their only reliable weapon against financial risk: the increase of capital requirements.

The existing prudential regulation framework already allows them to act[5], and as it happens, EU prudential regulations of the banking and the insurance industries – by far the most significant funders of the fossil fuel industry -, are being reviewed by the Commission in 2021, allowing for immediate action[6].

In Europe, the political will is lacking and the Commission is under pressure from Member States not to act, on the back of short term views that aim to protect local industrial or financial interests. But political pressure increases by the day[7].[8]

There is still time to right the ship, both at European and at International level. Will supervisors be fit for the task and perform their duty? The ongoing international supervisors mega-show on climate risks (the Green Swan conference where Finance Watch is represented by Thierry Philipponnat on panel H) will probably give us an idea of their frame of mind on this topic and the likeliness of todays’ supervisors to enter history as saviours or villains.

[3] BIS book: The green swan – Central banking and financial stability in the age of climate change

[5] Press release: EU has the tools to break the climate-finance doom loop

[7] The Green Swan Toolkit: Four priorities to ensure financial stability in the age of climate change 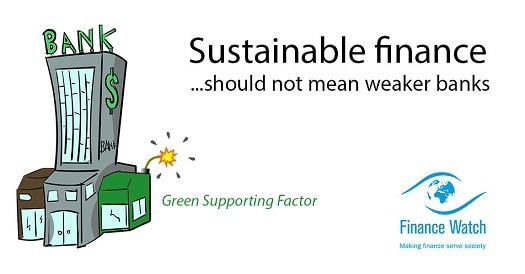