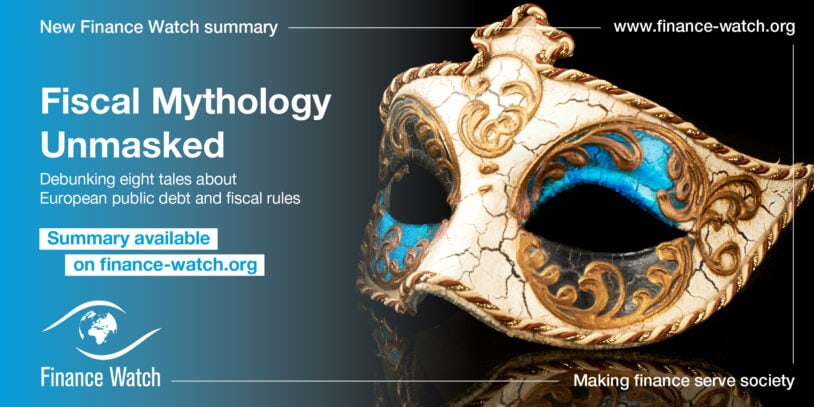 Europe faces serious environmental, economic and social challenges that require a rethink on public intervention. Not free to do as they wish, European governments de- vise fiscal and socio-economic policies constrained by a self-imposed maze of economic governance rules. Those rules are built on a series of debatable conceptions about public debt and the role played by the state. This paper focuses on debunking eight often-espoused conceptions:

Public debt often gets framed as an unfair burden on future generations. The “intergenerational equity” story overplays the liability trope around debt while overlooking three fundamental arguments. First, intergenerational equity commands investment that builds a resilient and sustainable world. Without that investment, governments will fall short when trying to provide for the most basic needs of future generations. Investment costs will weigh less on future generations’ shoulders than the cost of failing to do so. Second, debt provides a legitimate way of spreading costs across all benefiting generations when it provides financing for investments in education, research, innovation, sustainable and resilient infrastructures and productive ca- pacities. Third, the current ultra-low interest rate environment provides the opportunity to lock-in low, long funding costs, which relieve the debt burden for future generations. Intergenerational equity commands to discern debt sustain- ability as intertwined with the sustainability of the world. In a context where there can be no such thing as sustainable debt without a sustainable world, Europe must shift from an excessive focus on public spending quantity to a pledge to ensure its quality.

Public investment often gets brushed off under the argument that it would crowd out more productive private investment. In fact, this portrait overlooks three core arguments. First, a crowding-out effect cannot exist in the current world-wide environment of excess liquidity and savings. Second, public goods provision, resilience building, and climate change mitigation requires public money, as related investments cannot be expected to be solely privately financed. Third, quality public investments can boost and steer the economy towards socially desirable goals. Captured by the fiscal multiplier, this crowding in effect proves particularly strong during recessions and low interest rate periods. Far from being antagonistic, public and private investments must be seen for what they are: namely complementary.

EU countries with comparatively high stocks of government debt to fellow Member States often get accused of living “beyond their means”. A closer look shows a more nuanced picture. While no evidence exists showing excessive social spending or lower working hours, significant shares of public debt appear to be a legacy from unexpected events such as the financial crisis of 2007-2009 or the current Covid-19 pandemic. In a number of cases, high levels of public indebtedness embody the legacy from the high interest rates that prevailed in the 1980s and 1990s and not from supposedly reckless fiscal policies conducted since then. Italy provides a case, for instance, as it suffered an average yield on 10-year govern- ment bonds of 14% between 1980 and 1993, with a peak surpassing 20% in 1982, and reached continuous primary surpluses during the recent decades.

Building on the household analogy, public budget surplus is often presented as a necessity to repay debts and build “fiscal space”. This debate reveals two main flaws: First, a public budget surplus means the government takes from society more than it gives to society. Seeking budget surpluses proves counterproductive when interest rates fall below growth rate and when economic depression hits, and is always of secondary importance in comparison with investing to build a sustainable and resilient society – as evidenced by the importance of sustainability-related fiscal risks. Second, intra-EU trade imbalances continue to hamper the prospects for every Member State to run concomitant budget surpluses. Rather than trimming back spending to comply with arbitrary numerical fiscal rules, the European Union and its Member States should focus on investments that contribute to building a sustainable and resilient economy, pouncing on the current rock-bottom interest rate environment to lower fiscal risks, extend debt maturities and bring down debt servicing costs. Protecting public budgets better from swings in market sentiment requires monetary policy that ensures permanent market access for sovereigns at favourable conditions as well as a stronger “lender of last resort”. Orderly sovereign debt restructuring should be facilitated when debt becomes unsustainable. Lastly, policy should address intra-EU trade imbalances.

EU fiscal rules are presented as a package of sound limits designed to eschew the deficit bias of politicians. Meanwhile, the chosen fiscal limits lack economic justification: while the 60% debt-to-GDP limit was only a rough average of the then 12 EU countries, the 3% deficit limit is the economically unjustified heritage of its prior usage in France. Whilst the “debt-to-GDP” ratio suffers important conceptual flaws – such as non-commensurability and time-inconsistency – debt sustainability requires more than reaching a specific threshold.

European fiscal rules usually get depicted as flexible enough. In fact, flexibility is sparse and the rules dampen growth and employment while holding back Europe from reaching its environmental and social goals. Reforms must aim to improve quality of spending, take context better into account and prioritise long-term social and environmental sustainability over arbitrary fiscal constraints.

This is irresponsible: in an economic future disrupted by Covid-like crises, public purses won’t fill up to service the debt. Assessment of debt sustainability should factor in the risks derived from under-investing in the ecological transition or in health infrastructure

…especially as our fiscal framework relies on debatable assumptions on public debt & the role of states! We debunk 8 myths in our report “Fiscal Mythology Unmasked“. Comparing household & state budgets is one – the so-called Household Fallacy

A closer look at our EU fiscal rules reveals that even the main quantitative thresholds are arbitrary. They have no proven link with the actual capacity of states to reimburse public debt

Likewise, unjustified fears related to inflation risks block a most needed debate on the need for more and better public investment and recovery plans.

Overall, the suspension of the Stability and Growth Pact (SGP) and the upcoming review of the EU economic governance are THE opportunity to get things right. But we need to hear civil society and academic voices too…

Join our #FiscalMatters coalition and subscribe to our newsletter in English, German and French

One Framework to Rule Them All