Fabien Hassan is an analyst for the 2° Investing Initiative, a Paris-based think tank working for the alignement of the financial sector with the objectives of emission reductions to mitigate climate change. Fabien holds a degree in Economics from the Ecole Normale Supérieure de la rue d’Ulm, in Paris. He also studied in Sciences-Po Paris, Princeton University, and the Free University of Berlin. Read his blog here.

What kind of institutions are divesting?

To fight climate change and reduce CO2 emissions, environmental advocates have found an enemy: companies exploring and extracting fossil fuels. The divestment movement was born to convince investors to stop financing those companies. Boosted by impressive successes despite opposition, the movement has one major benefit: it forces investors to consider their impact on the real economy.

Investing for the right future

Since 2012, investors throughout the world have been confronted with a new demand from environmental activists: to withdraw all funds invested in fossil fuel companies. As emitters of greenhouse gases (GHG), coal, gas, and oil majors are pinpointed for their responsibility in climate change. The divestment movement, initially launched by 350.org, asks investors to pledge that they will stop financing fossil fuels and sell their shares in those sectors: “We want institutional leaders to immediately freeze any new investment in fossil fuel companies, and divest from direct ownership and any commingled funds” (gofossilfree.org).

If you have never heard of divestment, this might seem like an odd attempt at mobilising civil society against climate change. The subject is very technical, and few people are aware of the investments made with their money or that of their university, municipality or insurance provider. 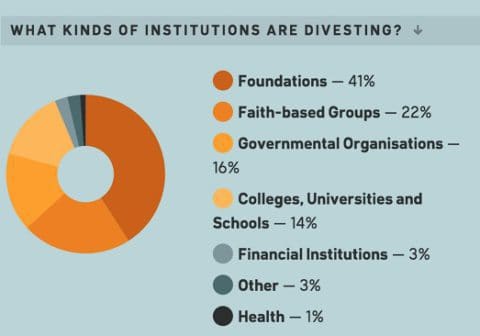 As a campaign, thanks to organised activists and good communication, the divestment movement has achieved remarkable results. In the United States, where it all started, prestigious universities such as Stanford were early signatories to the pledge. They were joined by other responsible investors including foundations, municipalities and churches (see graph above).

Two examples illustrate the successes of the movement. In 2014, the Rockefeller Brothers Fund endorsed the divestment pledge. The symbol was all the more striking since the Rockefeller family is at the origins of Exxon, now the biggest worldwide oil company. The president of the fund made a beautiful parallel: “John D Rockefeller, the founder of Standard Oil, moved America out of whale oil and into petroleum. We are quite convinced that if he were alive today, as an astute businessman looking out to the future, he would be moving out of fossil fuels and investing in clean, renewable energy.”

Then in 2015, the Norwegian Parliament announced that its $900bn sovereign wealth fund, the world’s biggest, would divest from coal, affecting more than 100 companies. Again, this is a powerful symbol as the money constituting the fund represents decades of oil exports. Even those that made a fortune on fossil resources seem to believe that the future lies elsewhere.

The backlash of those successes is a series of very negative comments and articlesclaiming that divestment is either irrelevant, dangerous, or both. Truly, the movement does raise many questions: what should investors do with withdrawn funds? Is it a confusion of morals and finance? And, more importantly for some investors, is it risky and does it jeopardise yields?

According to research from MSCI, investors who sold their holdings in fossil fuel companies have made a slightly better return in the last five years than those who didn’t. Against divestment, the arguments based on investment performance may not be the strongest.

The real concern with divestment is impact. Does selling shares have any kind of impact on the behaviour of oil companies? In theory, if a high number of investors decided to divest, this would lower the demand, and hence the price of securities. Lower share prices could increase capital costs for fossil fuel companies, and reduce their ability to make new investments.

In practice, demand for liquid assets such as shares of oil majors is so big that it is impossible to fathom any kind of impact. According to the influential Kay Review of equity markets, markets are structured in a way that makes such sales inoffensive for companies: “The unhappy shareholder exits only by finding someone else to take his or her place. This substitution does not eliminate the impact of exit, but it greatly reduces it” (Kay Review, 2012). Divesting investors will be replaced by other, less aware investors, who won’t ask questions, and the company will go on with its business as usual.

So what is the alternative? Many institutions that refused to join the divestment movement, such as Harvard University, promote engagement with companies. By retaining shares, responsible investors retain their voting rights and their influence against companies. They can ask questions, file resolutions at the General Assembly, and even remove board members that adamantly refuse to account for climate change.

Engagement is on the rise, but is still marginal. For an investor, engagement implies analysing the investment policies of companies, putting forward alternative strategies, and building coalitions of shareholders. Those actions can be very costly. For an investor questioning the strategy of a company, the easier solution is to sell the shares: “The structure and regulation of equity markets today overwhelmingly emphasise exit over voice and this has often led to shareholder engagement of superficial character and low quality” (Kay Review, 2012).

According to Carbon Tracker, a British NGO that contributed greatly to the reflections of institutional investors on the financial impacts of climate change policies, divestment and engagement are complementary approaches. Voice and exit are not just alternatives; they participate in a “mutually reinforcing process” toward “a climate-secure global energy system” (Carbon Tracker advisor Mark Fulton, writing in the Harvard Business Review, 2014).

Promoters of divestment are aware that the financial impact of their actions might be limited. They do however believe that their movement will contribute to mobilising civil society. Pressuring your university or community to divest its savings is a way to feed the debate on climate change, and questions our habits and ways of living. “Divestment isn’t primarily an economic strategy, but a moral and political one” (350.org). 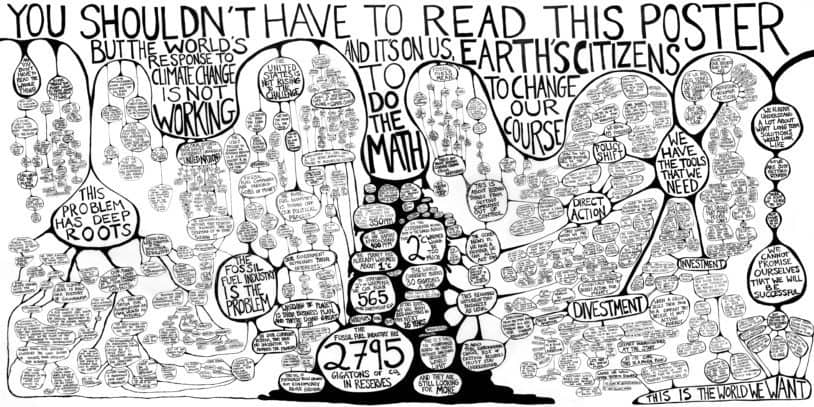 Divestment from fossil fuels could be compared to all kinds of boycotting campaigns. Among those, militants of the GoFossilFree movement often refer to the anti-Apartheid divestment campaign of the 1980s. According to them, it “helped break the back of the Apartheid government and usher in an era of democracy and equality” (350.org).

Was the South African regime really toppled by divestment? Some academics have tried to measure the impact of the movement, and do observe an effect, but they usually mix divestment and the complete withdrawal of US firms from South Africa (Posnikoff, 1997). If those withdrawal decisions are excluded, the conclusion is quite straightforward: at Harvard in 2014, a panel concluded that “the evidence is pretty clear that divestment of stock exerts little, if any, economic pressure on a company to change its behavior”.

The reason is exactly the same as the one developed in the Kay Review: “Even a spectacularly successful divestment campaign would involve only a fraction of a company’s shareholders, and there would likely be many other companies and individuals willing to buy the divested shares”. Divesting investors will always be a minority, and there will be more buyers for the stocks. As a financial weapon, the direct effects of divestment are, at best, unclear. As a campaign with indirect effects, divestment has a stronger impact. For instance, the movement developed into parallel pledges, such as the Paris Pledge, supported by more than 100 organisations, which calls on banks to stop financing the coal industry while shaming the top “coal banks”.

This momentum will strengthen the divestment movement, and lead more investors to sell their shares in coal, oil and gas companies. Even conservative risk managers could be tempted: another lesson from the South African case shows that at portfolio level, divesting did not necessarily increase the level of risk taken (Rudd, 1979).

One particularly remarkable paper assesses the costs of divestment for an investor (Grossman & Sharpe, 1986). It discusses the scope of the divestment policy, and estimates the initial transaction costs of divestment at 0.41% of the overall portfolio value, which is small but far from insignificant.

To understand those transaction costs, it can be useful to remember that a large part of investors manage their funds passively. As opposed to active investors who pick stocks, passive investors simply replicate indices. In this case, divestment is not even an option: the whole principle of passive investing is to minimise the tracking error (defined as the gap between a fund’s performance and the performance of the tracked index). The underlying investment thesis is that buying all the (liquid) stocks amounts to buying a share in the economy. Investors spare themselves the work of analysing stocks separately: the poor performance of an individual company is mechanically compensated by better returns at its competitors.

A consequence of passive investing is a shift of competences: passive managers do not need equity analysts, or economic forecasts. They actually do not need a lot of resources, which saves management fees.

Passive investors need a competent asset manager, able to track the index appropriately, and in turn, asset managers need reliable index providers. Eventually, the added-value and core intelligence of passive investing relies on quantitative experts who can define a set of mathematical preferences to calculate an index, implement trading rules that minimise the tracking error, keep fees as low as possible, and provide hedging solutions.

In other words, this is a world where people calculating statistical correlations and pricing products are more useful than people looking at the economic activities of the individual companies in a stock market. Simple maths show that in a universe of a few thousands liquid stocks worldwide, you can create an almost infinite number of indices.

An alternative to divestment therefore consists in buying low-carbon or fossil fuel-free indices, where the index provider excludes some of the companies emitting excessive CO2 according to its own, often complicated, set of rules.

Reconnecting finance and the real economy

Forcing investors to consider the impacts of their decisions on the real economy is probably the most interesting feature of divestment. It is also the most depressing: in a world of free capital flows, deregulation, and expansionary monetary policy, fathoming any kind of impact of decisions is almost impossible, even as those decisions are made by impressive coalitions of institutional investors.

There is hope that the growing consideration of the financial consequences of climate change will lead the financial industry to look beyond short-term yields, and rethink its impact on the real economy. In 1967, Adolf A. Berle wrote that: “The contribution [of a shareholder] to anyone other than himself is the maintenance of liquidity for other shareholders who may wish to convert their holdings into cash. Clearly he cannot and does not intend to contribute managerial or entrepreneurial effort or service”. The divestment movement is one opportunity for investors to finally prove him wrong.