It has been five years now since the financial crisis hit Europe, and still, the European banking system remains dominated by a handful of too-big-to-fail universal banks so huge that their failure would threaten whole economies. Avoiding the collapse of such a banking system came at a huge cost for taxpayers: in total, European nations have spent EUR 1,600 billion in state aids and guarantees since 2008, an amount that does not include all the side-effects of the financial crisis on both the economy and society.

Putting an end to too-big-to-fail is a necessary condition to protect European citizens from future bank failures. This requires structural reforms, including separating vital banking activities (lending, deposits and payment systems) from other activities.

You made your voice heard!

The European Commission is also convinced that a structural reform of the European banking sector would help to “establish a stable and efficient banking system that serves the needs of EU citizens and the economy, increases economic growth by reducing instability and improving resource allocation”. (link)

But what should this reform look like and what would be its implications? The EU Commission established High-Level Expert Group to examine the questions. The Group published its final report in October 2012.

As a follow-up to the report’s recommendations, the European Commission launched a public consultation in June 2013. Finance Watch encouraged citizens, consumer groups, NGOs, unions and others to respond to that consultation, in order to counter-balance the expected numerous contributions from the financial sector (and especially from large universal banks which are fighting hard to keep their hidden funding subsidies). 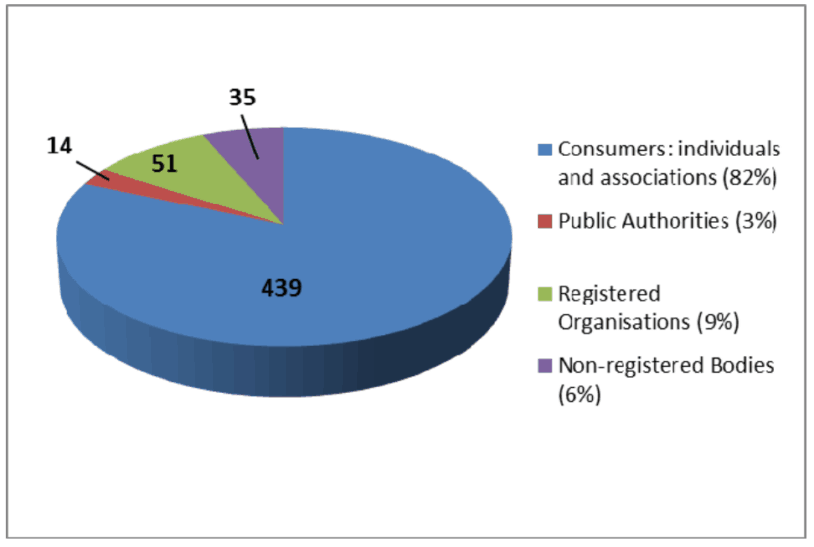 And you did it! The Commission received 540 replies, of which the majority were from citizens. The Commission’s official summary of replies says: “While the composition is fairly traditional, the number of responses from individuals (439) and consumer associations (11) stand out. The majority of these 439 replies took either the exact, or abbreviated, form of a recently-publicised Finance Watch response to the consultation.”

Thanks again to everyone who participated! If you are one of them, you can find your name in this list.

The responses showed that banks are “to an overwhelming extent against structural separation”, while consumers and non-bank financials were largely in favour. If you want to dig deeper into it, read the summary of replies.

This result shows clearly what European citizens want: a clear separation of banking activities. Finance Watch will follow the next stages closely and take every opportunity to push for this key public interest reform.

Commissioner Michel Barnier set up a High-level Expert Group (HLEG) led by Erkki Liikanen to consider in depth whether there is a need for structural reforms of the EU banking sector or not.

In the course of its work the HLEG invited any interested parties to submit their comments and responses to its consultation related to bank structural reform. The Group received 80 responses, among them a Finance Watch contribution.

The HLEG presented its final report to the European Commission with five main recommendations:

As a follow-up, the European Commission published a consultation paper on Reforming the Structure of the EU Banking Sector on 17 May 2013. Finance Watch submitted its response together with a huge number of individuals after a Finance Watch call for action.

The European Parliament published its own initiative report on reforming the structure of the EU banking sector. Read the Finance Watch press release from 1 July 2013 regarding this vote.

A legislative proposal is still to come…

What has happened so far at a national level?

Meanwhile, some European countries have already opted for national reforms to banking structure that could pre-empt the EU legislative proposals.

UK: On 4 February 2013, the Financial Services (Banking Reform) Bill was introduced to Parliament. The legislation is supposed to be in place by the end of this Parliament (2015), and banks will be expected to have implemented reforms by 2019 at the latest. Finance Watch has published a contribution to the UK ring-fence debateon 14 February 2013. Click here to see the progress of the Bill.

Belgium: The Belgian Finance Minister Koen Geens announced on 4 October that he will make a legislative proposal for reforming the banking structure by the end of 2013. More information in the final report of the National Bank of Belgium “Structural Banking Reforms in Belgium” (July 2013) as well as on the campaign website www.Scinderlesbanques.be.

Netherlands: The Commission on the Structure of Dutch Banks, chaired by Herman Wijffels (Liikanen Group member), published in June 2013 its report “Towards a serviceable and stable banking system”, which provides recommendations to improve serviceability and stability of the Dutch banking sector including potential structural reform. Read an official summary of the Dutch report here.