Steve Keen is an Australian economist and author.

Ten years after the crisis, the Australian economist Steve Keen, who has recently joined Finance Watch as an individual member, calls his mainstream counterparts to account for (still) ignoring the very obvious causes of financial crises. He shows that those obvious causes are unfolding now, not at a global level but in the many countries that side-stepped the crisis in 2008 by continuing to accumulate more private debt. His own profession, as he concludes, should have showed us how to avoid economic and financial crises, but has instead encouraged us into them.

The meteor that wiped out the dinosaurs 65 million years ago was not a “Black Swan”. It was not an unpredictable random event, but a predictable deterministic one, though embedded in the chaotic dynamics of the interplay of gravitational attractionbetween the myriad objects in our Solar System. It’s why astronomers today keep track of the many NEOs (“Near Earth Objects”) which could collide with the Earth, so that we, unlike the dinosaurs, will not be sent extinct when “It” threatens to happen again (or at least we will know Doomsday’s date in advance). So, though such events are very rare, we are ready for them.

You can read more on this topic in Professor Keen’s book “Can we avoid another financial crisis?”, which can be purchased from Polity Books or Amazon and has been translated into Italian.

For a satirical take on economics, check his short cartoon book “eCONcomics: Taking the CON out of Economics”, illustrated by Miguel Guerra.

You can read more by Professor Keen and support his work on https://www.patreon.com/ProfSteveKeen. 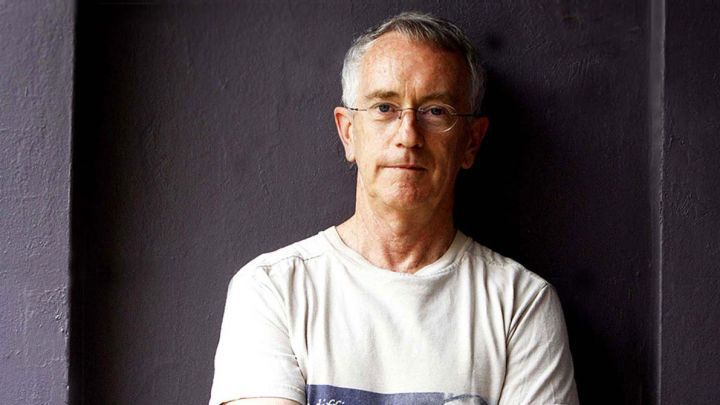 If only the same preparedness applied to economics. Financial crises are, of course, far commoner than massive meteor impacts. But each new one catches us by surprise, not because they can’t be predicted, but because economists refuse to consider the obvious data that warns of their approach. We might as well have dinosaurs in charge of our economic observatories.

In a nutshell, financial crises are caused by a boom-bust process driven by private credit, which is created whenever banks create a new loan. Fluctuations in credit are of minor significance when private debt levels are low, but they are catastrophic when private debt levels are high. Banks create too much money during the boom—normally financing asset bubbles rather than productive investment—and when the boom ends, money creation gives way to money destruction in a bust that we call a financial crisis.

Ignoring the signs of a new crisis

The data on this are so obvious as to be overwhelming. The next four charts show the levels of private debt and credit (the annual change in private debt) as percentages of GDP for Japan (the first country to suffer a serious credit crisis, back in 1990), the USA, UK and Spain.

Similar relationships exist in asset markets, and in particular, between mortgage credit (the annual change in mortgage debt, which is the primary source of monetary demand for housing) and house prices. This is in flagrant contradiction of the canons of conventional finance theory, which argues (in what is known as the Modigliani-Miller Hypothesis) that leverage does not determine asset prices. The main determinant of the change in house prices is the change in mortgage credit.This is obvious for US data, where mortgage debt levels are readily available, and econometric testing confirms that changes in mortgage credit cause changes in house prices, rather than vice versa. The correlations between change in total household credit and change in house prices since 1970 for the other countries are respectively 0.4 for Japan, 0.6 for the UK, and 0.47 for Spain. 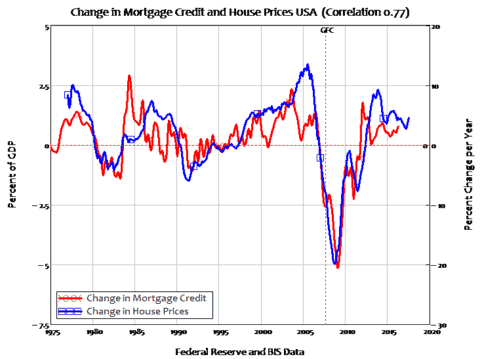 Data like these demand examination, but a decade after the financial crisis, mainstream economists continue to ignore them.

Some might see ideology, or corruption, behind such a flagrant disregard for the data. I see something at once more innocent and more insidious. It is belief.

Ignoring the banking system when modelling the macroeconomy

Mainstream economists have learnt an intricate and superficially all-encompassing theory, which they believe provides not merely an explanation of the complicated reality of the economy, but also a guide as to how it can be improved. To have to admit that a core component of this theory—specifically, their belief that one can quite literally ignore the banking system when modelling the macroeconomy—is simply too much for them to bear. So they ignore obvious evidence that contradicts their beliefs.

This was easy to do before the crisis, since there had not been a banking crisis of this scale since the Great Depression, and because the rebel economists who argued that banks do play a crucial role in the economy belonged to minority sects in economics that they could safely ignore.

After the crisis, not only is it clearly delusional to ignore the fact that the banking sector caused the crisis, the assertion that the mainstream economic model of banking is wrong is now being made, not by relatively obscure non-mainstream economists, but by authoritative bodies like the Bank of England and the Bundesbank.

Unfortunately, they are willing to remain delusional to cling to their belief in their model of the economy. The most egregious example of this is a recent paper that argues that bank money creation can be ignored so long as one is willing to assume “there is no uncertainty and thus no bank default” {Faure, 2017 #5419}. This, just one decade after a crisis that mainstream economists claimed at the time was unpredictable, and in which numerous banks did default!

It should be obvious that such voluntary blindness about the role of banks and credit in macroeconomics will give the world no warning again when another crisis approaches, not because no warning is possible, but because this wilful ignorance turns a blind eye to the very obvious causes of financial crises.

Those obvious causes are unfolding now, not at a global level but in the many countries that side-stepped the crisis in 2008 by continuing to accumulate more private debt. The four largest such economies are China, Canada, South Korea and Australia—and there are several others, including Singapore, Sweden, Norway and Belgium.

In all of these countries, government policies led the private sector to avoid the negative credit experiences that made the 2008 crisis so severe in the USA and UK. 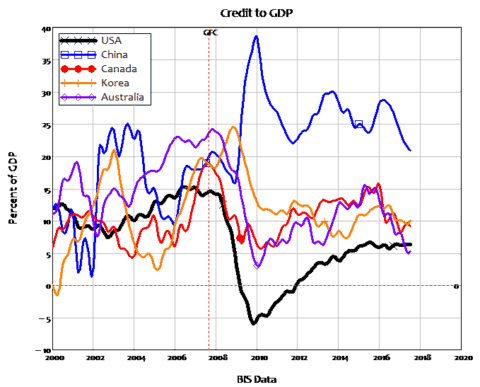 But the cost of that success was the accumulation of even more private debt than brought the USA and UK unstuck in 2008. These countries will therefore experience their own, localised versions of the 2008 crisis when their credit bubbles burst—and almost all of them are on a negative trajectory already. When their crises occur, virtually all the world’s major economies will be caught in private debt traps—the only exceptions being countries like Germany that have exploited huge trade surpluses to enable their private sector debt levels to fall over the last two decades (Germany’s private debt level is 107% of GDP, and credit is a mere 4% of GDP). 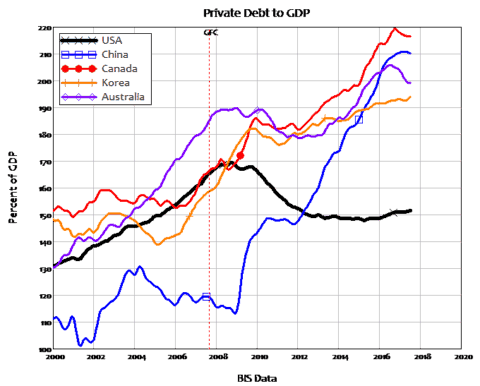 All this has occurred under the unwatchful eyes of mainstream economists. The profession that should have showed us how to avoid economic and financial crises has instead encouraged us into one that it understands as well as the dinosaurs understood meteors.

Ignoring the impact of climate change

As bad as this failing is, it is not the worst way in which conventional economics has misled us. Almost all mainstream economic models ignore the role of energy in production, and those that do presume that energy, labor and capital are readily substitutable for each other, so that a large fall in available energy for production can be countered by a large increase in the labor and/or machinery inputs to production.

Assumptions to the contrary in mainstream economics have encouraged a dangerous complacency about the impact of climate change. This was well captured in a satirical aside by Larry Summers some years back, when he introduced his “secular stagnation” explanation for the lethargic rate of economic growth after the 2008 crisis. Summers stated that he likes to think of financial crises as “analogous to a power failure”:

The network would collapse … and output would of course drop very rapidly. There’d be a set of economists who’d sit around explaining that electricity was only 4% of the economy and so if you lost 80% of electricity you couldn’t possibly have lost more than three percent of the economy and there’d be people in Minnesota and Chicago … who would be writing that paper but it would be stupid … We’d understand that somehow even if we didn’t exactly understand in the model that when there wasn’t any electricity there wasn’t really gonna be much economy… (https://www.youtube.com/watch?v=KYpVzBbQIX0&feature=youtu.be&t=519)

The implicit assumption in mainstream economic highlighted by Summers, that energy is largely irrelevant to production, could be even more dangerously misleading for humanity than their assumption that they can ignore the financial system when modelling the economy.

If, as many climate change researchers warn us, we are forced to rapidly reduce our reliance on carbon-based energy systems by the impact of global warming on the biosphere, then we could face a severe fall in the energy available for production in the next thirty to fifty years if, as is highly likely, alternative energy exploiting systems cannot be scaled up sufficiently to make up for the fall in coal and oil-based energy.

Ignoring the impact of availability of energy

According to the “Cobb Douglas Production Function” that mainstream economists use, this fall in available energy would have no impact whatsoever on the level of production. According to a Cobb-Douglas Production function modified to include energy as an alternative input to labor and capital, it would take a 90% fall in energy levels to cause a mere 10% fall in GDP—as Summers’ remark implied.

Even a Neoclassical production function modified to take account of the essential role of energy in production still presumes a degree of substitutability between machines and labor that implies a 10% fall in output would require a 30% fall in available energy. But the more realistic “Leontief” approach to modelling production used by Post Keynesian economists implies a linear relationship between energy and GDP: a 10% fall in energy would cause a 10% fall in real GDP. 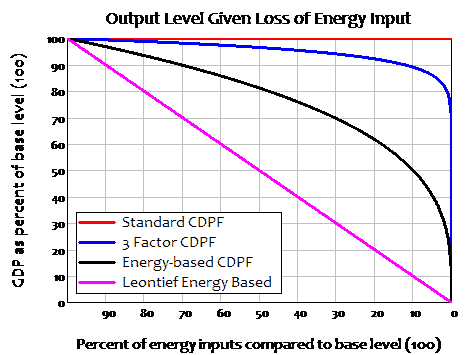 As an amateur in the analysis of climate change, I can only speculate about the extent to which it will affect the availability of energy. But if there is any impact whatsoever, I can be confident that mainstream economics will vastly underestimate its impact upon not only production, but the sustainability of human society itself.

The dinosaurs could blame lack of intelligence for their untimely demise. Humanity clearly doesn’t lack for intelligence, as even a glance at what our engineers and physicists have created can confirm. But in the crucial field of understanding how our social system functions and how it interacts with the planet’s ecology, we are little better off than the dinosaurs.