To get a feel for how they think financial markets have changed in the last 15 years, Finance Watch’s Matthieu Lietaert took the opportunity to interview Joe during his recent visit to Brussels. Enjoy and don’t miss the competition at the end to win a copy of the book!

Joe, the title of your book sends a strong message. Are markets really broken?

A lot of investors still think that what happens on the New-York Stock Exchange is what they see on TV [traders standing in a trading pit on the stock exchange floor] but most of the action is actually done in a data centre at Mahawa, New Jersey, outside of Manhattan.

What are the core changes that happened?

There used to be a duopoly: there was the NYSE which traded listed stocks and NASDAQ which was a market-maker trading the technology stocks.

That’s changed now. These exchanges have become for-profit. Exchanges used to be mutually owned organisations which basically looked after their members. What happened along the way is that the duopoly fragmented, allowing all these new exchanges to come about and these new dark pools. There are actually 13 stock exchanges and over 50 dark pools now.

Dark pools are essentially non-displayed liquidity venues. So you can go in there and hide your order. And people hide orders because they do not want to be tracked by a machine-based trader or a person.

You use a lot the term ‘colocation’ in your book. Could you tell us more?

High Frequency Trading (HFT) firms, as well as others, figured out that the closer you are to that server, the quicker you will receive information and then you can act on that information sooner.  HFTs talk about milliseconds, microseconds and now nanoseconds, which is a billionth of a second. So some thought they would set up a shop across the street or close-by because the distance the data had to travel was shorter. Eventually the exchanges figured it out and said “Hey! I’ll build an entire warehouse, half a million square feet and you can then rent space and sit next right to my main hub.” That’s called “colocation” and you have to pay a price for that.

As an analyst and a practitioner, do you think that the financial markets are still “serving the real economy”?

Most of the volume is nowadays being dominated by short term traders, who do not even know the name of the company, don’t even know the CEO. They don’t care! They just care about “pinging” and “sniffing” and getting that next penny in the next microsecond. The Flash Crash in May 2010 is a perfect example of a price discovery system that pretty much blew up on this. How can the market go down 10%? In October 2012, India had a 16% flash crash… 16%! That should never happen in a stock market. 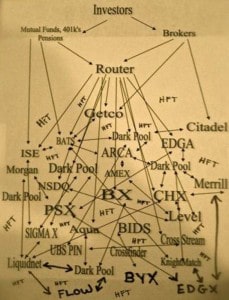 The point is that people start losing confidence. One thing the market cannot get back overnight is confidence! When confidence leaves, money leaves. And we have seen it in fund flows: in the US, over 300 billion dollars just got out of long term equity funds since May 6th 2010, which was the flash crash. They are tired and they do not want to play the game anymore.

What is the impact on the real economy?

The point of an equity market is capital formation. So you have a small company, you do an IPO [initial public offering, launching a company’s shares on the stock market] and get some equity from long term investors who think it is a good growth company. Take that money, grow the company, create jobs, increase the economy and that’s the cycle. In the US we are averaging around less than a 150 IPOs a year now. Before the dot com bubble we were averaging 500 a year… Companies don’t want to go public anymore.

From the book: “For too long, the HFT and market structure debates have been monopolized by a small group of industry insiders, regulators, and group thinkers. In the process, our markets have morphed into an insanely complex web of conflicted stock exchanges, dark pools, alternative trading systems (ATSs), and liquidity providers.”

In terms of solutions what was done after the Flash Crash?

The SEC [Securities and Exchange Commission which regulates the U.S. securities industry and enforces its laws] put in single-stock circuit breakers, which was a good idea but does not fix everything. They also put in some sort of credit check for firms not to come to the market without some sort of sponsorship. Again, a decent idea but it’s not getting to the core of the problem.

So for you, what should be done?

The first thing that we would do immediately and it would not take a lot from the SEC is to get rid of that “maker-taker” system, which is essentially a system of payment-for-order-flow. In other words, stock exchanges will pay you to “make” liquidity [liquidity is high when you can trade without moving the market price] or they will charge you or “take” if you take liquidity off the book. There is no need for a broker to be paid to add his order flow to an exchange. I am a broker. I trade on behalf of institutional clients, we think a flat rate would be fine. Whether you make or take liquidity, you pay the same fee. What you’d get rid of is what is called “rebate arbitrage”, where firms can trade the same stock at the same price and still make money. This does not make any sense.

The “maker-taker” system is a way to increase volume but it does not really increase liquidity. Exchanges love it because the more volume they get, the more money they make, obviously. If they were ready to do what we suggest it would probably drop volume significantly which of course the exchanges won’t like. However we think it’s the right thing to do.

What about this idea of an order cancellation fee?

Sure, we would impose a cancellation fee across the board. HFT firms cancel over 90% of their orders. Some estimate it’s actually as high as 99%. I think of a market-maker as somebody who owns a shoe-store. In a shoe-store, there are rows and rows of shoes and when a client comes in and says “I want the size 12 of that black leather shoe” you have it for me! Because you have it in your inventory. That was an old market-maker. The new market-maker would say “I’m going to buy that shoe. Just come back later and I’ll have it”. That is not market-making. You’re just acquiring the stock in front of me and I could do that myself.

Are there other solutions?

Yes, do a pilot program for wider ticks [“tick size” is the minimum price change that exchanges allow when securities are traded]. Right now the minimum ticking in the US is 1 penny. We think that if you widen the tick, you would encourage more liquidity. By widening the tick you give them extra benefits so you would also require obligations: you have to be on that quote for a certain amount of time, your quote has to be for a certain amount of shares, you cannot trade in between the spread at any increment, there would be a certain minimum increment you can trade at… That would encourage real liquidity, particularly in the small to mid-caps.