This is the first in a series of articles entitled “Lessons from history” which aim to provide some historical background to today’s financial issues.

The writings of Joseph de la Vega show that “modern” financial features such as derivatives, short selling, proprietary trading and their confusing terminology were commonplace in 17th century Amsterdam.

Joseph de la Vega (1650-1692) was a Portuguese Jew whose family had immigrated to Amsterdam as a result of the Inquisition in Spain and Portugal. He worked as a banker, a businessman, and a writer. In 1688, he published Confusion de Confusiones, in Spanish. The “book” is a four-part dialogue between a philosopher, a merchant, and a shareholder. Although sometimes unclear and poorly written, Confusion de Confusiones remains a milestone for financial history because it constitutes the first accurate description of a stock exchange. To a 21st century reader, many of the phenomena he described are strikingly familiar.

A few things are important to understand the context of the early Amsterdam exchange market. The main stock involved was the stock of the Dutch East India Company (Vereenigde Oost-Indische Compagnie, or VOC). The VOC was incorporated in 1602 and it was granted a monopoly to carry out colonial trade in Asia. The West India Company stock was also traded, to a lesser extent. 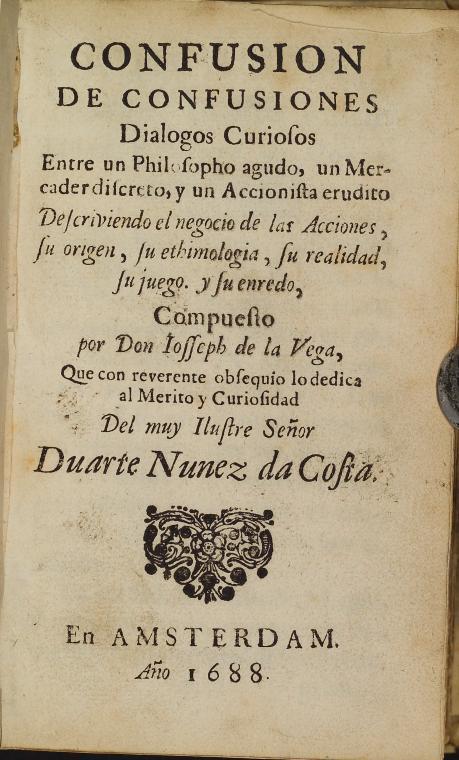 In 1688, derivatives had existed for quite a long time on goods like spices and grain but shares were still a relatively new invention. The unit value of a VOC share was very high (17,000 guilders in 1688), a feature which provided a powerful incentive to create derivatives in order to curtail risks or simply to afford an interest in the market. The incentive proved sufficient. In the introduction to the English translation of the dialogues, H. Kellenbenz explains that: “In a few decades the Dutch, aided perhaps by members of the ‘Portuguese nation’, found it possible to devise both procedures and stratagems which modern operators have scarcely been able to better”. In other words, the main financial contracts traded today already existed in Amsterdam in the 1680s: forwards, calls, puts, margin trading…

De la Vega distinguishes three kinds of investors: “princes of business”, “merchants”, and “speculators”. He claims that the market became a “game” as speculators became too big a part of the market. He might as well have been writing about today’s commodity derivatives markets, where the exact same concern has led to campaigns against “food speculation” and calls by Finance Watch and others to clamp down on excessive speculation in the commodity markets (see page 38 of “Investing not betting”).

De la Vega tells us another puzzling story about regulation. Frederick Henry, the Prince of Orange who ruled the Netherlands until 1647, had prohibited short sales. To implement the measure, he allowed buyers to “appeal to Frederick”, i.e. to repudiate such contracts. According de la Vega, this actually increased speculation because you could speculate via short sales and simply refuse to pay if things went wrong. Short selling is rather better organized today but is still controversial and still attracts regulations, the most recent one in 2012. 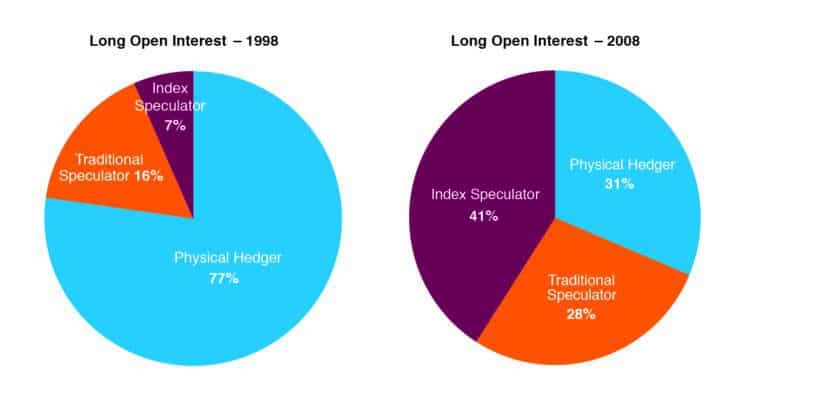 The complexity of the market was reflected in the confusing vocabulary: “I really thought that I was at the construction of the Tower of Babel when I heard the confusion of tongues and the mixture of languages on the stock exchange,” wrote De la Vega (Dialogue II).

Dialogue IV is the description of an astonishingly subtle twelve-step stratagem designed by “bear syndicates” in order to drive down the price of shares. Conflicts of interests involving brokers are explained perfectly: “the broker in question was doing business on his own account […]. If he gets an order, the carrying-out of [which] binds him in a direction contrary to his own transactions, his heart trembles […], and unless he is… skillful in escaping from danger… he perishes wretchedly and dies as a fool.” The language is a little more flowery than you will find in the Volcker Rule (a US measure to ban proprietary trading at large US banks) or in Finance Watch’s recommendations on proprietary trading, but the issues seem to have changed little.

De la Vega also explains how a lack of transparency enables speculators to manipulate prices and favors the spreading of rumors. The LIBOR scandal too, it seems, has a long pedigree.

Don’t be fooled: there has been some financial innovation throughout history, but the recent explosion of the financial sector is foremost due to deregulation, not to innovation.