This is the tenth in a series of articles entitled “Lessons from history” which aims to provide some historical background to today’s financial issues.

Facing similar problems of unsustainable public debt, 18th century England and France tried to resort to new financial techniques to solve their solvency issues. John Law, a famous Scottish economist, promoted an ingenious scheme that lured the highly corrupt French monarchy. But in the end, this only resulted in massive bubbles, and someone had to take the losses.

La rue Quincampoix is a small, narrow street of Paris, near Les Halles. Today, it is a lively place, which boasts many bars, and where Parisians and tourists like to hang out. It has become hard to imagine that centuries ago, such a peaceful street was the stage of the biggest financial scandal of French history, the Mississippi bubble, also known as John Law’s scheme.

It is not merely anecdotal that the activity of exchanging stock would take place in narrow medieval areas. That was also the case in London. In the late 16th century, as the business of stock trading was thriving, the Royal Exchange was built. These massive temples of finance were terribly efficient at symbolising the power of a new class of capitalists. But they proved partly inadequate to host trading. Indeed, stockholders were laymen, whom noblemen of the Court found hard to mix with. Furthermore, trading was still largely oral. So in London, negotiations and transactions took place in neighbouring coffee shops, most famously on Exchange Alley. Small streets met the needs of early financial markets: they enabled an important concentration of taverns, so people could shout at each other, or run across the street with pieces of paper to try to find a better deal.

Let us now go back to Paris. In 1720, hoards of investors and speculators happily exchanged Mississippi Company shares, and all kinds of derivatives associated to it. They made impressively rapid profits. But at the end of May, the Mississippi bubble burst; and French trust in credit markets was ruined for three generations. How did that happen?

Sweeping under the carpet

Throughout the 18th century, the French monarchy was constantly bothered by financial pressure. But instead of reforming the unsustainable fiscal system of France, monarchs successively tried to have debt magically disappear. Just before the Revolution, a particularly remarkable mechanism relied on the “Thirty Maidens of Geneva” scheme.

In the 1710s, another technique was strikingly sophisticated. Under the influence of an extraordinary charismatic and gifted financier from Scotland, John Law, the Regent of France proceeded to what we would call today a debt-to-equity swap, aimed at reducing the annual burden of French sovereign debt. To be fair, the Regent was not just fooled by Law’s enthusiasm. He personally invested in the bubble, and made a fortune while small investors were ruined. To a great extent, the swap was inspired by the then great enemy, England.

In England, the manoeuvre of the debt-to-equity swap centred on the South Sea Company. A swap is a complicated debt-managing operation. At the time, public debt generally took the form of annuities. An annuity is a fixed amount of money paid to someone every year, usually until their death, in exchange for an initial payment. The swap was essentially an offer made by the State to its creditors. They had a chance to exchange their debt title against shares of a State-owned company.

How does that generate profit? The creditor gets a tradable and liquid asset instead of an annuity, which is non-transferable. In exchange for that supplementary liquidity, creditors lend money at cheaper rates. The borrower can therefore reduce the cost of its debt. Just as if today, the German government offered its creditors to exchange their bonds for Deutsche Bahn shares. Except that today, States being the biggest borrowers, sovereign bonds are more liquid than stocks.

The mechanism was a win-win, hence the great success of the first conversion operations. The other side of the coin was that people suddenly realized the power of financial innovation. And then, it all went too big. In the summer of 1720, almost all of English sovereign annuities were converted into shares of one single company, the South Sea Company, which never had any substantial economic activity. It became a purely financial vehicle.

The implosion of the bubble

The main asset of the South Sea Company was the interest paid by the State in exchange for transferring its debt into the books of the company. When the State could not pay, the Company did what it had always done best: capitalizing. In other words, arrears were added to the debt and… swapped for equity. The mechanism seemed magical. The less solvent the State, the more money the South Sea Company raised. But in the long term, share value can only be sustained by the flows of expected dividends. The average interest rate paid by the State was around 4%, whereas the share price reflected implicit dividend expectancies of at least 8 to 10%. Investors eventually realized that, and the bubble burst in the summer of 1720. In France, the same happened with the Mississippi Company. In fact, John Law resorted to even more complex strategies, involving currency manipulation. 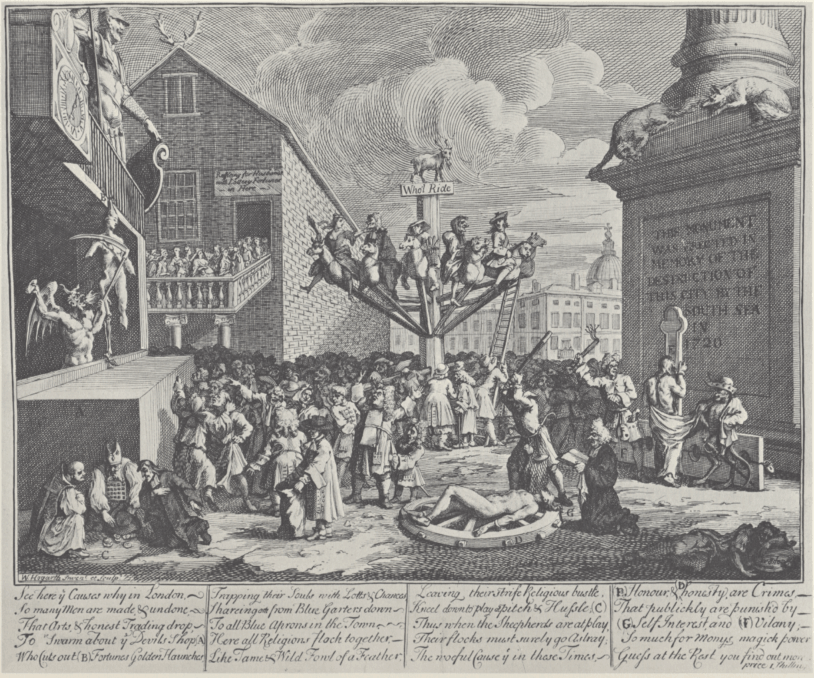 The overall impact of the operation is unclear: the Mississippi and South Sea companies may even have been beneficial for the finances of the French and English governments in the short term, because debt titles were traded for shares that turned out to be worthless. But this undermined people’s confidence in sovereign borrowing. Public finance in France never really recovered until after the Revolution.

These implicit costs are always hard to figure out, and often neglected. Today, when Western States grant an implicit guarantee to all systemic financial institutions, they do not necessarily spend money. In narrow terms, bail-outs may even make a profit. But this does not change the fact that this guarantee is extremely costly because it distorts the economy in bigger ways and feeds financial instability, which can lead to recession.

Nothing new under the sun

The South Sea and Mississippi bubbles are the result of several factors. They would not have been possible without massive corruption in Parliament, a complete absence of regulatory framework, enthusiasm for novelty, huge-scale insider trading, etc… But the striking feature of those bubbles is the fact that a useful financial innovation turned into a massive scam, because there were no legal or political barriers to limit the excesses of easy money.

Indeed, the Mississippi Company was a successful trading company which traded in Louisiana and built New Orleans in America. When it was first introduced, the swap actually made sense. John Law, the architect of the system, was an extraordinary mathematician and a brilliant gambler. But he ended up fleeing France like a refugee, just as he had fled England in his youth after murdering a love rival in a duel.

John Law is a fascinating character. His life ended in Venice, where he gathered an impressive collection of paintings in his late years. Meanwhile, in 1721, English Parliament had to adopt the “Act for Making Several Provisions to Restore the Publick Credit”, the first public bail-out in history. Taxpayers’ money saved the English financial system from its own excesses. Reminds you of something?