Finance Watch today published an open letter to French finance Minister, Pierre Moscovici, warning that his proposed reform of the French banking sector could be a “non-reform” that fails to deliver President Hollande’s election pledge on bank reform.

President Hollande promised during the presidential election campaign to separate banks’ lending from their speculative activities. [1] The proposal does not do this. Instead it speaks of “useful” and “non-useful” activities, pinning the reform on subjective definitions and missing the economic logic of the president’s campaign pledge. The proposal also contains significant loopholes. 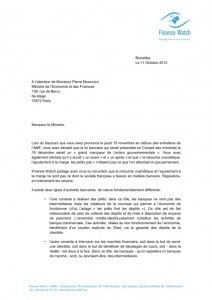 The draft law, due to be announced on 19 December, would leave the essential activities of creating credit, taking deposits and operating the payment system under the same roof as financial trading.

These activities have different economic natures: bank lending involves money creation, while financial trading is pure intermediation and does not require money creation. Mixing these different functions has created huge dangers and losses in the past; that is why bank reforms should separate them properly now. Under the draft law, retail deposits may still be used to fund banks’ trading operations.

Judging by the text now circulating, this will be an essentially cosmetic reform. Our view is reinforced by the upbeat statements of French bank executives about how little the reform would affect their businesses.

One would allow banks not to separate in a different entity their huge portfolios of derivatives simply by designating their counterparties as customers of the bank. This would leave the funding subsidy in place for derivatives trading. These subsidies have already helped the global derivatives business to grow sevenfold since 2000, with the French banks playing an essential role in this market. [2]

Another loophole is the exemption of unsecured lending to hedge funds. As their loans are nearly always secured, hedge funds will not be caught by this rule and banks can continue to create credit to support hedge funds’ trading activities. This contradicts both President Hollande’s election promise and the recommendations of the EU’s Liikanen report.

The draft law proposes a new resolution regime to wind up failing banks. This is a positive step but we doubt that it could cope with the failure of France’s largest and most complex banks, whose combined assets are multiples of national GDP.  Even the best resolution regime can only work if banks are small enough and simple enough to be resolved.

President Hollande promised during the presidential election campaign to separate banks’ lending from their speculative activities.  This arrangement served the United States very well between 1933 and 1999, when the country’s banking system supported its economy through decades of growth.

We hope that the coming legislative discussion of the law will be the opportunity to come up with a text that will make a true distinction between lending and trading activities in the banking sector.