Finance Watch and its partners, Finanzwende and WeMove.eu, have garnered already 80,000 signatures for their petition to „Stop Libra“. Citizens widely support our call to ‘stand against Facebook’ on its dangerous project.

Many politicians and financial supervisors have recognised the risks of Libra and publicly criticised the Facebook project since its announcement in June 2019. But until today, no European policymaker or regulator has proposed concrete measures to limit the potential risks from the introduction of Libra in Europe.

That is why we teamed up with WeMove.eu to share our assessment („Ten reasons why Libra is a bad idea“) with as many citizens as possible and ask you to sign our petition to „Stop Libra“. If you have not done it yet, please join the 80,000+ people and sign the petition:

(Also in French and in German – WeMove.eu has translated the petition in three more languages: Polish, Italian, Spanish) 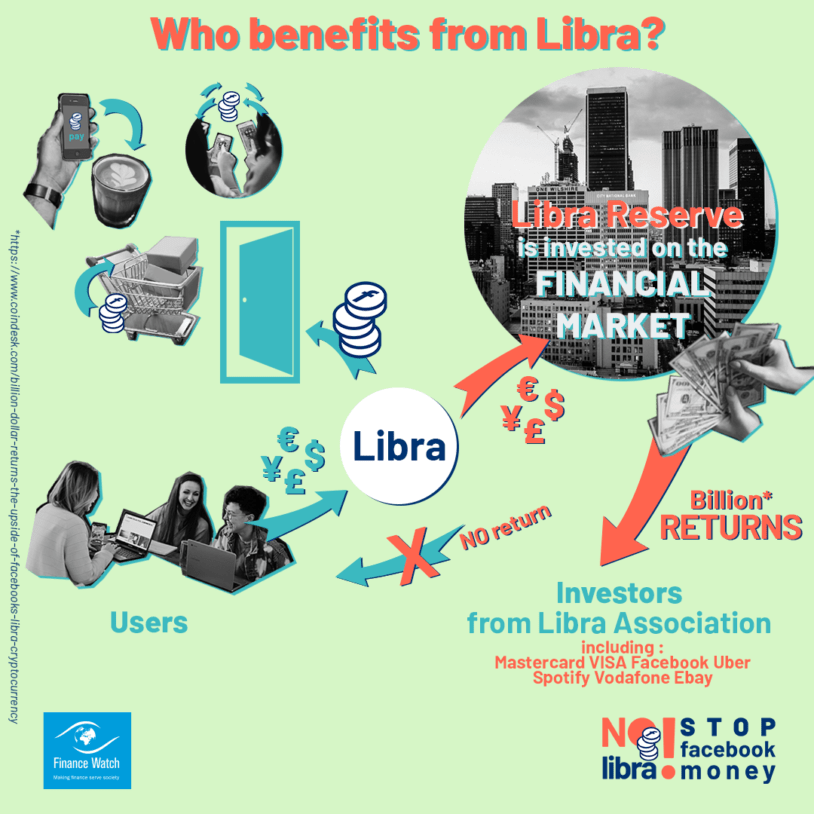 Illustration from the #NoLibra campaign

Albeit weekly rumours (and even financial bets) related to whether Facebook will or will not release its Libra in 2020, we have to keep up our guard. Facebook seems undeterred by recent criticism. David Marcus, the head of Facebook’s stablecoin project, Libra, claims that their cryptocurrency is “a chance for the free world”.

Quite the contrary! Facebook currency must be stopped! This is not about blocking technological progress; it is about blocking one of the most powerful corporations in the world from entering a whole new level of power. The dangers of a private digital currency for all of us cannot be overlooked: at stake are the protection of our personal data, the security and sovereignity of our currency and the stability of our economy. Libra may be a very profitable opportunity for Facebook & Co. but it is an enormous risk for everyone else.

Once you have signed, please scroll up again to the top of the page ?

No Climate Justice without Sustainable Finance