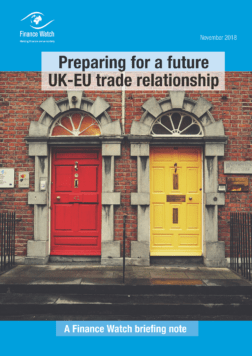 Brussels, 15 November 2018 – The protection of citizens needs to be put first in the elaboration of a future regulatory cooperation for financial services after the UK’s withdrawal from the EU. In its  briefing note „Preparing for a future UK-EU trade relationship“, which was published today, Finance Watch presents its recommendations on how to ensure a high level of protection for citizens and to help reduce risks to financial stability.

„EU states and the UK need to find a way to constructively collaborate post-Brexit, to protect the interest of their citizens. The commitments made in the outline of the political declaration to preserve financial stability, market integrity, investor protection and fair competition now need to be backed up by concrete proposals that explain how this will be achieved.

„It is important that states do not put competing for financial services ‘business’ ahead of properly protecting their citizens with an adequate regulatory framework.  A key aim must remain avoiding a dangerous deregulatory race to the bottom.

„The current EU financial regulation framework is by no means perfect, and it certainly cannot afford any risk of watering down already insufficient protections. Both EU member states and the UK must continue improving and building this framework that can protect citizens from the consequences of another financial crisis.”

In its briefing note, Finance Watch makes the following recommendations to ensure the integrity of the EU’s financial services regulatory framework:

Charlotte Geiger, Senior Communications Officer at Finance Watch, at charlotte.geiger@finance-watch.org or at 0032/(0)474331031.

On 13 November 2018, the European Commission has published detailed information on its ongoing preparedness and contingency work in the event of a no deal scenario in the Article 50 negotiations with the United Kingdom.

The following day, British and European Union negotiators agreed on a draft withdrawal deal, more than two years after the country voted in a divisive referendum to withdraw from the bloc. It was approved on 14 November by the UK ministers’ cabinet and must now pass a UK parliamentary vote, probably before the end of the year. The withdrawal agreement will also now need to be approved by the European Council (possibly at the leaders’ summit on 25 November) and then by both the European Parliament and the Council of the EU (expected to be in early 2019).

Beyond the illusion of Net Zero portfolios: harnessing finance to decarbonise the real economy