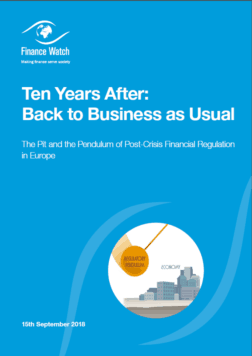 Brussels, 13 September 2018 – The collapse of one of the largest investment banks, Lehman Brothers, ten years ago must serve as a powerful reminder of the fragility of our financial system. Over the last 30 years, finance has lost its connection to the economy and the needs of society. In its comprehensive analysis of post-crisis regulation, Finance Watch demonstrates that the opportunity for a fundamental realignment of the global financial sector has been missed and that none of the structural vulnerabilities that led to the financial crisis of 2008 have been tackled in a decisive way.

Download the complete Finance Watch report “Ten Years After: Back to Business as Usual. The Pit and the Pendulum – Post-crisis financial regulation in Europe” (44 pages)

“Compared to 2008/09, the international community’s arsenal for dealing with another global financial crisis has been depleted. Whereas the risks facing the financial systems have remained broadly unchanged, the fiscal and monetary tools available to governments and central banks have been dramatically reduced.

“Even worse, the ‘regulatory pendulum’ is swinging back with a vengeance: the forthcoming Banking Package (CRR II/CRD V/BRRD II) shows every sign of a beginning deregulatory backlash. Warnings by international organisations, central bankers, supervisors and other experts go largely unheeded.”

“The financial lobby has been very efficient in steering the post-crisis debate away from fundamental changes. Instead of focusing on the root-cause of the crisis – 30 years of financialization of the economy – the post-crisis discussion has been framed only in terms of making the existing system a bit safer.

“Citizens are outraged that they had to pay to bail out banks and are still suffering today from the consequences of the crisis without seeing any meaningful change in how finance works and its role in society. As the rise in political extremism since the crisis shows, this poses a grave danger to our democracies.

“Ten years on from the crisis, a Change Finance movement is growing at global and national level: this should provide hope for citizens who are looking for credible alternatives to 30 years of deregulation, liberalization and booming inequalities.”

Finance Watch has initiated together with more than 60 organisations the “Change Finance Coalition” aiming to transform the financial system into a tool to accelerate a transition to an economy serving people and the planet. The Coalition is organising a “10 Years On”-campaign with more than a hundred actions worldwide on the 15th September 2018 to engage citizens into a call for change.