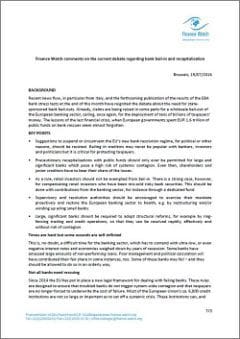 Recent news flow, in particular from Italy, and the forthcoming publication of the results of the EBA bank stress tests at the end of this month have reignited the debate about the need for state-sponsored bank bail-outs. Already, claims are being raised in some parts for a wholesale bail-out of the European banking sector, calling, once again, for the deployment of tens of billions of taxpayers’ money. The lessons of the last financial crisis, when European governments spent EUR 1.6 trillion of public funds on bank rescues seem almost forgotten.

Times are hard but some wounds are self-inflicted

This is, no doubt, a difficult time for the banking sector, which has to contend with ultra-low, or even negative interest rates and economies weighed down by years of recession. Some banks have amassed large amounts of non-performing loans. Poor management and political calculation will have contributed their fair share in some instances, too. Some of these banks may fail – and they should be allowed to do so in an orderly way.

Not all banks need rescuing

Since 2014 the EU has put in place a new legal framework for dealing with failing banks. These rules are designed to ensure that troubled banks do not trigger system-wide contagion and that taxpayers are no longer forced to underwrite the cost of failure. Most of the European Union’s ca. 6,800 credit institutions are not so large or important as to set off a systemic crisis. These institutions can, and should be, put into insolvency proceedings by the relevant national authorities and be wound up. Depositors would be protected up to their guaranteed limits, assets realised and investors and other creditors compensated from the proceeds in line with the ranking of their claims. Taxpayers would be spared. It is clear that the collapse of a bank, small as it may be, is a traumatic event for its clients, its employees and their communities. But this applies in equal measure to any failure of a business. National regulators need to be more proactive, however, and tackle weak banks early on before their problems become contagious.

Rescues do not have to come at taxpayers’ expense

There are, of course, some banks which, by virtue of their size, their importance for the economy and/or their pivotal role within the financial system, could destabilise the system if allowed to fail in an uncontrolled manner. These banks, some 100-150 at most, would need to be placed into resolution when it becomes apparent that they are failing or likely to fail. Again, there are clear rules: depositors and taxpayers must be protected. Hence, when a large, significant bank is put into resolution by the resolution authority, it will be recapitalised, by way of a bail-in, and restructured, all of this while staying open for business. Bail-in means that shareholders, unsecured (junior and senior) bondholders and certain other creditors, will have their claims written off or converted into equity – they stand to share in the losses and may lose some or all of their investment. In doing so they shield the taxpayer from having to underwrite the bank’s rescue.

Precautionary recapitalisations are a “safety valve” in exceptional circumstances

But it should not even have to come to that. To prevent banks from going into resolution in the first place, the EU supervisory framework provides for preventive tools. When a large, significant bank performs badly in a stress test, such as the exercise currently under way at the EBA, and there are concerns that the bank’s frailty could destabilise the financial system and disrupt the economy of a member state, European Law allows for a so-called “precautionary recapitalisation”. This would allow for the bank to be recapitalised without going through resolution. Shareholders and (junior) bondholders would still be bailed in but other creditors would remain unaffected. Subject to European Commission approval the bank could be recapitalised with third-party, including public, funds. Finance Watch believes that “precautionary recapitalisations” should be applied very restrictively and only ever in the case of financial institutions that have been designated as significant or systemically relevant. A blanket dispensation, with a raft of small institutions sailing through in the wake of a large one, would fundamentally dilute the resolution regime and should be strictly avoided.

Legacy problems must be addressed

There are other practical complications. In some instances, notably in Italy, unsecured bonds that would normally be bailed in are held, to a large extent, by retail investors. Bailing them in could, in some cases, wipe out people’s life savings and create a huge political backlash. This is what happened at the end of 2015 when the Italian government enforced a (partial) bail-in at four smallish regional banks. Once again the immediate political response was to call for an end to the bail-in tool and for a return to state-sponsored bail-outs. This would be the wrong conclusion, however, deliberately confounding two separate issues: on the one hand, shareholders and creditors – not taxpayers – should be bearing the losses of a failed bank; on the other, retail investors should be adequately protected against mis-selling of risky paper and compensated accordingly. Finance Watch recognises that this mis-selling of bank debt is a material legacy problem in some EU member states. It should be addressed and solved on its own, however, and not be instrumentalised as an argument for bail-outs. Where retail investors have been mis-sold risky securities in the past, they are entitled to redress: funds should be established in these countries, funded by the banking sector, to cover the losses incurred by retail investors in a bail-in. Going forward, all securities subject to bail-in need to carry appropriate disclosures and risk warnings. Some, such as contingent convertible bonds, may not be sold to retail investors at all. Ultimately, bank securities should be held by sophisticated investors who are capable of bearing and absorbing losses in a potential bail-in.

The bail-in tool is a step in the right direction but, on its own, is not enough to remove the threat that large banks pose to financial stability. Given the size and complexity of large, significant banks there will always be structural and practical complications and impediments that make resolution appear difficult and risky. And supervisors and politicians will continue to be tempted to resort to bail-out as a simpler and politically more expedient option. To be practicable, bail-in needs to be linked with structural reform where large, complex banking groups are obliged to place their different businesses into ring-fenced, separately capitalised and individually resolvable units, with capital markets and trading activities in one entity and deposits and conventional lending in another. It will only be at that point that banks will be truly resolvable – and taxpayers finally safe.