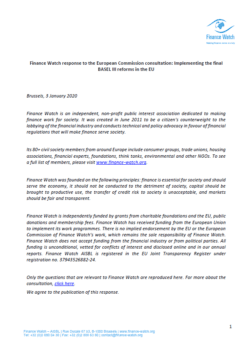 On 3 January 2020, Finance Watch submitted its response to a public consultation held by the European Commission on the implementation of the final Basel III reforms in the EU.

As part of the implementation process of the final set of Basel III reforms in the EU, the Commission services aim to gather stakeholders’ views on specific topics in the areas of credit risk, operational risk, market risk, credit valuation adjustment risk, securities financing transactions as well as in relation to the output floor.

In its response to specific questions of the consultation document, Finance Watch makes the following points: