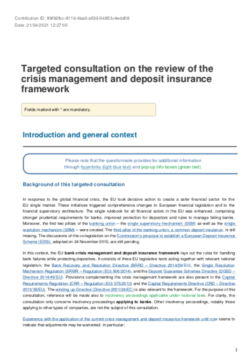 Finance Watch calls upon EU policymakers and regulators to concentrate their efforts on the rigorous and consistent implementation of the existing bank recovery and resolution rulebook. The proposed review should aim, in particular, at closing regulatory gaps, strengthening the Single Resolution Mechanism (SRM), and promoting convergence of national insolvency frameworks.

The current Crisis Management and Deposit Insurance (CDMI) framework, with the Bank Recovery and Resolution Directive (BRRD) and the Deposit Guarantee Schemes Directive (DGSD) as its legal cornerstones, marks undeniable progress compared to the situation before the financial crisis of 2008. Whether that progress is sufficient remains in doubt, however. Firstly, the existing framework has never been tested, so far, in a major crisis involving the potential failure of one, or several, global systemically important banks. Secondly, the new rulebook has rarely been properly applied even in the few cases that it had to deal with since its introduction in 2014. More often than not regulators and policymakers found ways to support failing banks with public funds, bypassing the strict resolution rules of the BRRD.

The proposed review of the CMDI framework should focus on addressing the principal regulatory gaps, especially the ‘precautionary recapitalisation’ clause in Art. 32(4) BRRD, and the misalignment between the ‘burden sharing’ rules in Art. 44(5) BRRD and the Commission’s 2013 Banking Communication. The burden of proof for the decision to declare a bank ‘failing or likely to fail’ should be reversed, similar to U.S. practice, to provide better legal protection for competent and resolution authorities and encourage the use of resolution process.

The lack of harmonisation of national insolvency frameworks, combined with big differences in the readiness and/or ability of national policymakers to lend public financial support to failing banks, continues to cause material divergences between Member States and hence an un-level playing field for institutions. Suggestions to make an extended set of tools available for use outside resolution, i.e. under national insolvency frameworks, could result in parallel structures and processes and further exacerbate divergences between Member States. If similar tools were available under national insolvency laws as they are in resolution under the BRRD/SRMR this parallelism would also create incentives for institutions to engage in regulatory arbitrage. In order to preserve the integrity of the Single Resolution Mechanism (SRM) and to ensure the uniform application of the CMDI framework the use of resolution-style tools should be strictly reserved for institutions that qualify for resolution in accordance with the criteria set out in Art. 32(1) BRRD. These tools should be applied exclusively through the SRM, and under the terms of the BRRD/SRMR.

Finance Watch is also sceptical of suggestions to facilitate resolution authorities’ access to national deposit guarantee schemes (DGS) to support resolution or insolvency proceedings. As of today, the financial and operational capacity of national DGS varies significantly across Member States, and so do other relevant factors, such as the relative size of the banking sector vis à vis the host-state economy, banks’ financial strength and asset quality, ownership structures, and the degree of market concentration. It is difficult to see, against this background, how promoting the involvement of national DGS in funding resolution or insolvency could contribute to more convergence between CMDI practices in the Member States.

The proposed European Deposit Insurance Scheme (EDIS) is, of course, intended to address these divergences and could also, in due course, become a potential source of resolution funding at the EU level. In the absence of an agreed, binding roadmap and timeline for the introduction of EDIS, it would appear preferable however, to maintain the structural separation of resolution and deposit guarantee funds, at least until EDIS has become operational. In the meantime, steps should be taken to ensure that the Single Resolution Fund (SRF) is funded, in full and on schedule, by the end of 2023, and that its proposed backstop, via the European Stability Mechanism (ESM) is operationalised by the end of 2021.

Berlin, 18 October 2017 – Ten years after the onset of the most serious financial crisis in recent history, the EU’s financial framework is still not consistent and needs to be...

Report: “#10yearsAfter – Back to Business as Usual”

The collapse of one of the largest investment banks, Lehman Brothers, ten years ago must serve as a powerful reminder of the fragility of our financial system. Over the last...