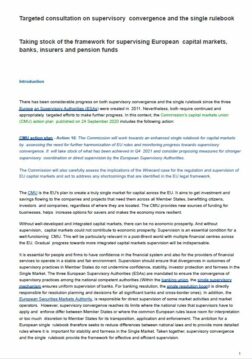 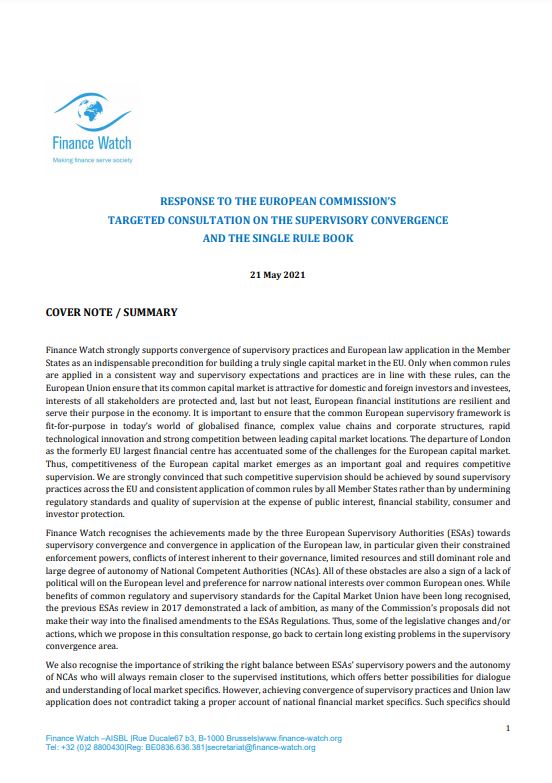 Finance Watch supports convergence of supervisory practices and European law application in the Member States and recognises the achievements made by the three European Supervisory Authorities (ESAs). A number of obstacles remain, however, in particular ESA constrained enforcement powers, conflicts of interest inherent to their governance, limited resources and still-dominant role and large degree of autonomy of National Competent Authorities (NCAs).

Among others, these are a sign of a lack of political will on the European level and preference for narrow national interests over common European ones. The following considerations are essential to achieve a true convergence in supervision and application of the Union law across Member States:

ESAs governance and resources: ESAs governing bodies should be reformed to eliminate the conflicts of interest embedded in the current structure, where the ESAs’ Board of Supervisors composed of the NCAs’ governors have the authority to take decisions on all tasks related to ESAs mandates. ESAs’ governance should include independent appointed directors with a major role in the day-to-day execution of ESAs’ mandate. Additional resources should be made available to ESAs, as the current budget constraints limit ESAs’ ability to effectively execute their tasks.

Direct supervision by ESAs: More direct supervision is necessary in targeted areas such as the ones with substantial cross-border activities and systemic risk/contagion implications due to reliance on a small number of market players. Such areas should potentially include central counterparty clearing houses (CCP), central securities depositaries (CSD), payment systems, big audit companies, as well as Pan-European products.

Single rulebook: Significant differences in national interpretations and/or transposition of Union law into national legislation persist in certain areas. In particular, stronger harmonisation of rules and their application is required in the area of financial services provider authorization and product passporting, exercise of the freedom to provide services and right of establishment in the cross-border context.

Further reduction of national discrepancies in the EU law application should be done via increased use of regulations instead of directives as Level 1 legislation, as directives leave room for divergent national interpretations.

Systemic risk and macroprudential framework: In order to reflect on supervisory convergence holistically, the current review should be complemented by a revision of the European macroprudential policy framework, which would cover the role and mandate of the European Financial Stability Board (ESRB), as well as broader considerations beyond the existing institutions. ESRB should have powers to oversee the application of macroprudential tools in order to promote harmonisation of their use by NCAs, including the use of the countercyclical buffer, the systemic buffer and the designation of institutions as Other Systemically Important Institutions (O-SIIs).

Summary of the response:

Finance Watch Blueprint on the European System of Financial Supervision

Finance Watch welcomes the opportunity to review the European System of Financial Supervision (ESFS). We consider the system of supervision to be a key driver in ensuring the financial stability and...

Cheat sheet: What is European Supervision?