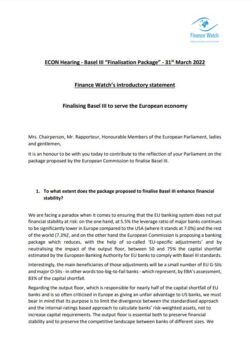 At the ECON Hearing on the Basel III “Finalisation Package” on 31st March 2022, Finance Watch’s Chief Economist, Thierry Philipponnat, called for a faithful implementation of the Basel III framework and to adapt it to take into account climate change related risk at Pillar 1 level (video here)

It is an honour to be with you today to contribute to the reflection of your Parliament on the package proposed by the European Commission to finalise Basel III.

1. To what extent does the package proposed to finalise Basel III enhance financial stability?

We are facing a paradox when it comes to ensuring that the EU banking system does not put financial stability at risk: on the one hand, at 5.5% the leverage ratio of major banks continues to be significantly lower in Europe compared to the USA (where it stands at 7.0%) and the rest of the world (7.3%)i, and on the other hand the European Commission is proposing a banking package which reduces, with the help of so-called ‘EU-specific adjustments’ and by neutralising the impact of the output floor, between 50 and 75% the capital shortfall estimated by the European Banking Authority for EU banks to comply with Basel III standards.

Interestingly, the main beneficiaries of those adjustments will be a small number of EU G-SIIs and major O-SIIs – in other words too-big-to-fail banks – which represent, by EBA’s assessment, 83% of the capital shortfall.

Regarding the output floor, which is responsible for nearly half of the capital shortfall of EU banks and is so often criticised in Europe as giving an unfair advantage to US banks, we must bear in mind that its purpose is to limit the divergence between the standardised approach and the internal-ratings based approach to calculate banks’ risk-weighted assets, not to increase capital requirements. The output floor is essential both to preserve financial stability and to preserve the competitive landscape between banks of different sizes. We must also remember that the US has applied an output floor set at 100% since the adoption of the Collins amendment in 2010, and that this output floor converts into an effective floor of 75%ii once corrected for methodological differences (mainly operational risk and credit value adjustment). In other words, there is no such thing as a competitive advantage given to US banks when it comes to the output floor, quite the contrary.

In summary, we are facing a situation where EU banks, despite being less well capitalised than their non-EU international competitors, will be subject to a lenient finalisation of the Basel III framework. Everything else being equal, this is not good for financial stability.

2. Recommendations to faithfully implement the Basel III framework and achieve its original objectives

Finance Watch is of the view that the Basel III framework should be faithfully implemented. In order to achieve that objective, the co-legislators should:

3. The Basel III framework should be adapted to take into account at Pillar 1 level the biggest of all risks, i.e. climate change related risk

Climate change is the biggest risk that banking institutions will be facing in the coming years. This is widely recognised by central banks, with the ECB stating for instance in October 2021 that “current capital buffers do not capture climate-related financial risks owing to underlying risk weights that do not yet reflect climate-related risks to the full extent”.

This risk is, first and foremost, related to banks’ exposures to fossil fuel assets and activities. With the world’s proven reserves of fossil fuel already six times larger than what we can afford to extract and burn if we want to respect the Paris Agreement, current banking exposures to fossil fuels incur a high level of risk as the underlying assets will be stranded, and all new money provided to finance further fossil fuel exploration and production will be wasted. This analysis is coherent with the call made by the International Energy Agency in the summer of 2021 to stop immediately investing in new fossil fuel assets.

Measures to address climate-related risks must be dealt with at Pillar 1 level in CRR as there is so much Pillar 2 and Pillar 3 measures can do, and climate scenario analyses, however useful, should be taken for what they are, i.e. analysis, not action. This is the only way to enable the European banking industry to withstand the worst effects of climate change and to avoid adding a new financial crisis on top of the looming climate crisis.

At the ECON Hearing on Solvency II and IRRD, Finance Watch calls for a symetric approach to risk assessment, adapting insurance companies’ capital requirements linked to fossil fuel exposures and...

Finance Watch called on EU leaders not to miss the opportunity of the upcoming review of banking and insurance prudential legislation to properly integrate climate risk. The letter was sent...