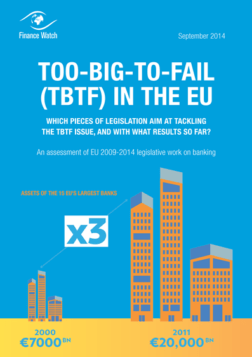 Finance Watch has published a note (pdf, 12 pages – this note also exists in German and in French) that provides an overview of the EU financial regulations (passed or still in discussion) related to the too-big-to-fail issue and an assessment of what remains to be done, in light of three major questions:

In the past five years, the European Commission has published an unprecedented number of proposals to re-regulate the banking sector and tackle the problem of too-big-to-fail (TBTF) banking.

While some progress has been made, a lot remains to be done to overcome TBTF including the structural reform of megabanks and the introduction of a binding leverage ratio, among other measures.

The package keeps the same methodology as before for the calculation of risk weighted assets: an overly complex, opaque and self-calibrating methodology.

Finance Watch recommends the implementation of a simpler, shorter and more transparent regulation, which would give more prominence to a simplified standardised approach over the IRB /self-calibrating approach.

Excessive leverage has been identified as one of the key causes of the current crisis. The introduction of a leverage ratio is therefore needed to improve banks’ robustness. Finance Watch suggests a flexible leverage ratio of 5%-3% (5% for normal times and 3% in downturns) – or 20x to 33x. This would mean that in normal times, a bank’s gross borrowings could not be more than 20x its Tier 1 capital.

The objective of the recovery and resolution framework (creating bail-in mechanisms) is right but several issues undermine its realisation.

• Many categories of debt such as covered liabilities are exempted from bail-in, which reduces the loss absorbing capacity of this tool. Second, too much is left to the discretion of national authorities. National resolution authorities have the possibility to “exclude, or partially exclude, liabilities on a discretionary basis if they cannot be bailed-in within a reasonable time; to ensure continuity of critical functions; to avoid contagion or to avoid value destruction that would raise losses borne by other creditors”. As a result, if a major banking institution failed, it could be expected that resolution authorities would not impose enough losses on creditors because they would fear a contagion effect, e.g. they could exclude derivatives that are a major source of interconnection between large financial institutions.

• This makes the bail-in tool less credible, which, in turn, feeds the too-big-to-fail problem: the belief that authorities will not pass on losses to creditors but rather to taxpayers will provide a funding subsidy to the very activities that make resolution impossible and bail-out inevitable.

The resolution fund is intended primarily for resolution but transforms into a loss absorption fund if needed. However, it will be of limited effect given that it may be too small to cope with the failure of the largest banks, especially if nothing is done before then to tackle excessive bank size, complexity and interconnectedness (as an illustration, each of the top 15 European banks have assets on average of EUR 1,300bn). The danger is therefore that Europe creates a paper tiger – an SRM that delays reform of the banks because it appears capable of handling bank failure, but which in a crisis actually cannot.

The European Commission’s proposal on bank structure sets the right objectives, but has little prospect of reducing the economic burden of too-big-to-fail banking on the EU’s taxpayers and real economy for three main reasons: First, although the banning of proprietary trading is welcome, it will contribute only marginally to reducing too-big-to-fail banking and the harmful implicit subsidies that go with it. Second, since any decision to separate will not be automatic but will be made on a discretionary basis by the competent authorities, based on a narrow test of whether there is a threat to financial stability, it is very difficult to predict whether separation of too-big-to-fail banks will actually be achieved. Finally, the text is further weakened by its high level of administrative complexity and numerous carve-outs.

The Banking Union will face its first test when the ECB carries out its comprehensive assessment of banks: what will happen if banks that need to raise capital after the assessment cannot do so in private markets?

• New rules (State Aid and BRRD) aim to require existing investors to contribute to a bank’s recapitalisation. However, a series of safeguards and escape clauses allow public authorities to let these private investors ‘off the hook’ especially if financial stability is at risk, in which case public money can be used to recapitalise the bank instead.

• High bank interconnectedness poses a threat to financial stability: authorities will not want to risk a domino effect propagating one bank’s losses to the whole system. This casts doubt on the credibility of the rest of the crisis management framework: if taxpayers cannot be protected after a round of stress tests, how could they be protected when exposed to a real financial crisis?

• A structural reform of banks would reduce interconnectedness and improve the credibility of resolution.

Coronavirus: a dangerous wave of personal over-indebtedness is on its way: here is how to avoid it