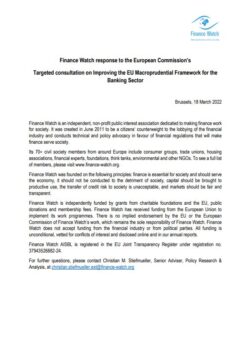 In order to contain the financial stability risks posed by its banks, the EU should strengthen and further harmonize the application of its macroprudential framework by member states and develop dedicated tools to address climate-related systemic risks

Finance Watch responded to the European Commission´s targeted Consultation on Improving the EU Macroprudential Framework for the Banking Sector.

There is only limited evidence of the overall effectiveness of the current buffer framework since it was put in place in 2014, as this was a period of generally benign economic conditions, stopped short only by the Covid-19 pandemic. As of the beginning of 2020, only five of the European member states had appropriate countercyclical (CCyB) buffers in place. Thus, releasable buffer capacity to cushion the effects of the economic shock was very limited.

On present evidence, Finance Watch is of the view that the current macroprudential framework suffers, first and foremost, from the inconsistency of its application by the member states. This relates to the use of the CCyB and systemic risk buffers (SyRB) and can also be observed in member states’ approach to the designation of other systemically important institutions (O-SIIs) and the use of O-SII buffers.

Finance Watch cautions against using macroprudential instruments to compensate, usually ex-post, for the inadequate calibration of microprudential requirements. Financial stability considerations should not be sacrificed to achieve political objectives such as avoiding ‘unduly raising capital requirements’. Further, the current macroprudential framework lacks tools to address climate-related systemic risk, which has been recognised as one of the major risks to the financial system.

Finance Watch calls upon EU policymakers and regulators to concentrate their efforts on the rigorous and consistent implementation of the existing bank recovery and resolution rulebook. The proposed review should...

On February 16, Finance Watch published its response to the consultation of the Basel Committee on Banking Supervision (BCBS) – on the Principles for the effective management and supervision of...