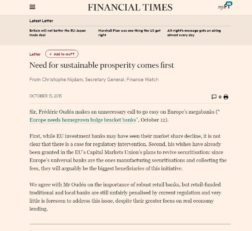 First, while EU investment banks may have seen their market share decline, it is not clear that there is a case for regulatory intervention. Second, his wishes have already been granted in the EU’s Capital Markets Union’s plans to revive securitisation: since Europe’s universal banks are the ones manufacturing securitisations and collecting the fees, they will arguably be the biggest beneficiaries of this initiative.

We agree with Mr Oudéa on the importance of robust retail banks, but retail-funded traditional and local banks are still unfairly penalised by current regulation and very little is foreseen to address this issue, despite their greater focus on real economy lending.

If you scratch the surface, the problem of too-big-to-fail banking remains as clear and dangerous as ever, as we may see all too quickly in the next financial crisis. There has been no meaningful bank structure reform at EU level, even though this would greatly help to reduce moral hazard and to refocus banks on core activities.

While bank capital has increased since the crisis, the loss-absorbing capacity of the EU banking sector as a whole has increased by much less, due to increased interconnectedness stemming from increased cross equity holdings. And the negative externalities of securities financing transactions, on which some large banks rely for funding, have still not been addressed. For example, we see little willingness to implement the Financial Stability Board’s recommendations on minimum haircuts and capping the reuse of collateral.

We understand concerns among big banks about competitiveness, but Europe’s need for sustainable prosperity must come first. We urge policymakers to be sceptical of calls from investment bankers for a European investment banking champion. They should instead promote banking models that do not feed on moral hazard, and recognise financial stability as a prerequisite for sustainable growth and job creation in the rest of the economy, not a barrier to it.