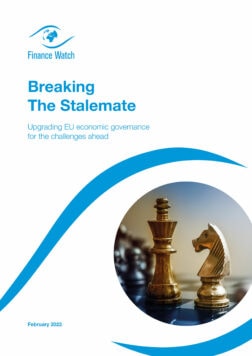 Thirty years after Maastricht and faced with serious economic, environmental, and social challenges, the time has come for Europe to upgrade its economic governance framework and views of the role played by the public sector: this policy brief outlines a way forward for Europe’s fiscal policy.

Addressing Europe’s economic, environmental, and social challenges calls for reform and significant public and private investment. Estimates of what is needed to bridge funding gaps are daunting: €520 billion a year until 2030 to meet EU environmental objectives, €142 billion a year for social infrastructure such as hospitals and schools, along with €190 billion a year to stabilise the stock of public capital – such as publicly-owned roads, buildings, bridges and ports.[1]

Many calls have been made over the past decade for private finance to fill these gaps, as the world bathes in abundant liquidity and private capital. Although these calls appear logical, funding gaps remain precisely because the private sector has little appetite to finance these investments, which are marked by low profitability or high risk.

Europe needs to update its view of the role played by the public sector and move beyond the 90s vision of economic governance. Better regulation is needed. But evidence also points to the need for better economic and fiscal policies to shape (new) markets, change incentives, and catalyse significant amounts of private capital towards EU’s objectives and global commitments. As it stands EU governments remain constrained by the European economic governance framework – a maze of rules built over 30 years on questionable assumptions about public debt and the role of the state.

European economic governance was created for a completely different macroeconomic environment. In the 1990s debt servicing costs were a significant part of Member States budgets, accounting for 3,5-11% of GDP, as governments struggled with high inflation and high long-term sovereign interest rates (7-25%).[5] In this context, creating binding numerical fiscal limits was perceived as a necessity to ensure that Member States could continue to service their debt – therefore limiting contagion risks inside the euro area – without assistance or bailout by other members or by the European Central Bank.[6]

The time has come for Europe to upgrade its economic governance framework. Thirty years after Maastricht rules first came into force, the same European countries have experienced a prolonged period of deflation risks – only recently eclipsed by temporary supply-induced inflation peaks[7] – and a continuous fall in long-term interest rates. In other words: servicing public debt has never cost so little to European governments. Most governments are able to sustain a much higher level of debt-to-GDP. Many calls have therefore been made to allow more leeway for qualitative public expenditures aimed at tackling Europe’s challenges.

After a first attempt was interrupted by the Covid crisis, in October 2021 the European Commission relaunched its public debate on the review of the European economic governance framework. Meanwhile, EU Member States remain divided on the need for reform and on which road to follow. This Finance Watch answer to the Commission’s consultation outlines 13 reform proposals to move beyond this stalemate and upgrade the framework to make it fit for our time.

A. DEBT RULES UPGRADED FOR THE 21st CENTURY

Fiscal rules aimed at ensuring debt sustainability are a legitimate feature of a monetary union. However, focusing on non-evidence based debt-to-GDP thresholds to gauge debt sustainability overlooks broader country-specific drivers of debt unsustainability and emerging fiscal risks. Furthermore, current debt-reduction rules are unrealistic. Abiding by these rules would require the euro area to maintain an annual fiscal surplus of 1.1% of GDP over 20 years – a level that would halt the recovery and lower many countries’ GDPs over the long run therefore increasing their debt-to-GDP ratio.

In a context of historically low debt servicing costs, high investment needs, and growing fiscal risks, Finance Watch calls for the following key upgrades to the EU economic governance framework (click on the title to expand):

Move the arbitrary debt limit from 60 to 100% debt-to-GDP[11], and reform its scope of application to cover only the share of the debt stock exposed to market scrutiny – i.e. the debt stock net of debt held by the Eurosystem and the European Stability Mechanism. Additionally, this arbitrary limit should become a long-term debt anchor that can be reached at different paces.

Better understand and monitor climate-related fiscal risks – i.e. the impact that underinvesting in climate change mitigation and adaptation will have on public budgets. IFIs of the United Kingdom and Ireland have started to estimate these fiscal risks.[12]

The European fiscal framework’s focus on numerical limits incents undifferentiated reduction of public spending with insufficient regard for context, euro area needs and fiscal stance, and spending quality – with public investment as collateral damage. This proves problematic in the presence of growing economic, environmental and societal challenges and daunting funding gaps. Failing to address these challenges via adequate reforms and investments could leave future generations worse off and  negatively impact long-term debt sustainability. Therefore, we recommend to:

Merge economic reforms and fiscal plans that the Member States submit as part of the European Semester[13] into multiannual National Reform and Investment Plans (NRIPs) that have to align with EU priorities, country-specific debt pathways and recommendations (CSRs). The latters should be formulated in a way that allows to measure progress towards targeted EU objectives.

Move from two deficit rules to a unique expenditure rule that caps expenditures net of interest, one-off and cyclical expenditures, net investment (up to a certain threshold), and certain categories of future-oriented expenditures. To address concerns that any mechanism of exclusion of some categories of spending could create negative incentives to circumvent the rules, we suggest the following.

Allow newly-formed governments to submit, as part of their NRIPs, a list of future-oriented expenditures[14] to be excluded from their expenditure ceilings. The decision to exclude some spending from a Member State’s expenditure ceiling should be part of a broader process of technical assessment by the Commission (e.g. respect of the do-no-significant-harm principle, quality, EU objectives, conditionality) and political validation by the Council.

Require Member States, supported by their IFIs, to assess and disclose spending quality[15] as part of their NRIPs. ‘Greening’ national budgets being an important part of the transition to a sustainable economy, such disclosure should assess the impact of public expenditure on the six environmental objectives as laid down in the European Taxonomy.

Fix bias against public investment by aligning public accounting with corporate standards: create separate accounts for current and for capital expenditures and spread investment cost over the investment lifetime.

Create an EU fiscal stabilisation capacity activated alongside the general escape clause and a EU permanent investment facility for important projects of common European interest. This would reinforce the international role of the euro and reduce the global shortage of safe assets.[16]

[1] While estimating aggregate financing needs remains challenging and the result therefore debatable – as overlap might exist –, they can be taken as a reference to estimate the order of magnitude.

[3] Abiding by this rule would require the euro area to maintain an annual fiscal surplus of 1.1% of GDP over 20 years – a level that would halt the recovery and lower many countries’ GDPs over the long run, therefore increasing their debt-to-GDP ratio.

[6] In addition to the EU fiscal rules, policymakers originally engineered market discipline as a force for fiscal prudence in the euro area. This was achieved by barring the way to a lender of last resort for sovereign issuers in the European Treaties – the monetary financing prohibition (art 123 TFEU) and the ‘no bailout clause’ (art 125 TFEU). The financial and recent health crises have shown that a different approach is needed. The first step towards this was the institutionalisation of the European Stability Mechanism (ESM) as a limited and conditional lender of last resort to sovereigns: the euro debt crisis crudely illustrated that the absence of such a lender creates higher risks of sovereign default. The second step was the progressive transformation of the ECB into a guardian of “favourable financing conditions” for sovereigns as sharp increases in yield spreads at the onset of the Covid crisis reinforced the case for more flexible and decisive actions.

[8] Risk premia have decreased sharply thanks to the establishment of the European Stability Mechanism as a (limited and conditional) lender of last resort for sovereigns, and of the European Central Bank’s ‘Outright Monetary Transactions’ (OMT) program. But the lasting fall in sovereign interest rates in advanced economies is not only conjunctural or related to accomodative monetary policy, it also has structural roots, among which: (i) economic growth lower than during previous periods, (ii) increased savings due to an ageing population, (iii) income growth in emerging economies, and (iv) an unmet uptick in demand for safe assets such as sovereign bonds due to a surge in risk aversion in the aftermath of the global financial crisis. All these structural and long-term factors play an important role in explaining why the multi-decade decline in sovereign interest rates should not be expected to be easily reversed. More in: SUTTOR-SOREL, L., “Fiscal Mythology Unmasked”, Finance Watch, July 2021

[11] Whilst the macroeconomic environment has changed in 30 years, pragmatic calls have been made to move to a 90% or 100% debt-to-GDP reference value. Meanwhile, reforming this reference value might prove difficult as it requires unanimity in the Council. See: ESM, “EU fiscal rules: reform considerations”, 2021; DULLIEN, S., et al, “Proposals for a reform of the EU’s fiscal rules and economic governance”, 2020; DULLIEN, S., et al. “Between high ambition and pragmatism: Proposals for a reform of fiscal rules without treaty change”, EESC, 2021, 48p.

[14] Future-oriented expenditures cover categories such as public investment, green expenditures, and productive social expenditures such as spending on education (i.e. investment in human capital) and healthcare – both associated with a positive impact on GDP growth.

[15] Understood as the effective contribution of an expenditure item to a policy goal – e.g. the European Green Deal, EUropean industrial policy.

[16] A shortage of safe assets as collateral constrains firms’ borrowing capacity and, therefore, has significant implications for economic development.