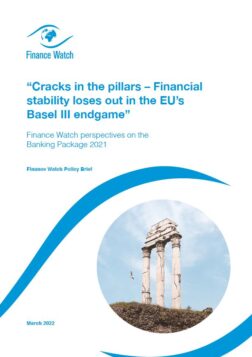 Finance Watch’s analysis of the Banking Package 2021 shows how it fails to do justice to the Basel III cycle of post-crisis reforms and continues to leave European banks insufficiently capitalised, and taxpayers exposed

The global regulatory framework agreed by the Basel Committee on Banking Supervision (BCBS) in December 2017 (Basel III), was created to address the insufficient capitalisation and inadequate risk controls of the banking sector that led to the financial crisis of 2008/09. The Commission’s legislative proposal, also known as the Banking Package 2021, aims to complete the post-crisis reforms and to ‘faithfully implement the outstanding elements of the Basel III reform in the EU, while taking into account EU specificities and avoiding significant increases in capital requirements’.

Finance Watch welcomes the initiative of the EU co-legislators to proceed with the implementation of the final instalment of the Basel III standards. We note, however, that the primary and overarching objective of the Basel III process – to restore financial stability and protect EU citizens and society at large from excessive risk-taking in the banking sector – is no longer mentioned as a policy objective in the Commission’s list of trade-offs that shaped its legislative proposal, which merely commits, rather tersely, to “implement the Basel III agreement faithfully”.

Judging by its content, the legislative proposal seeks to do justice, just about, to the letter rather than the spirit of the agreement. The largest EU banks, G-SIIs and major O-SIIs , would be allowed to continue operating with lower levels of capital, on average, than their global peers and with a competitive advantage over smaller and mid-sized banks in the EU domestic market. EU citizens, and society at large, would remain exposed to the systemic risk emanating from a poorly capitalised banking sector and liable to underwriting the losses of underperforming banks. If policymakers agree to cementing the unsatisfactory status quo in this way, they will, by the same token, have abandoned any pretence of completing the Banking Union. This circle does not square.

In order to faithfully implement the Basel III framework, and achieve its original objectives, the EU co-legislators should take a long, hard look at the Commission’s ‘EU-specific adjustments’ and

Finance Watch calls upon EU policymakers and regulators to concentrate their efforts on the rigorous and consistent implementation of the existing bank recovery and resolution rulebook. The proposed review should...

On February 16, Finance Watch published its response to the consultation of the Basel Committee on Banking Supervision (BCBS) – on the Principles for the effective management and supervision of...