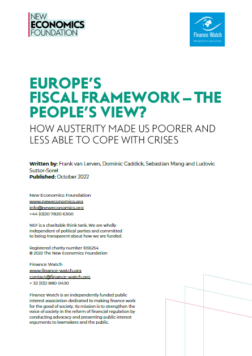 Excessive public spending cuts in the European Union since 2009 have contributed to making citizens €3.000 a year worse-off, according to a new policy brief from the New Economics Foundation and Finance Watch. The research includes polling results that showed most European citizens are worried about the reintroduction of austerity and agree that EU fiscal rules should be reformed.

The report finds that, had EU member states not implemented spending cuts following the 2008 financial crisis:

After the 2008 financial crisis, the EU introduced stricter fiscal rules in an attempt to reduce the levels of government debt. This included a reinforcement of the rules to bring government deficits under 3% of GDP and debt-to-GDP levels under 60% – more in our paper “Navigating the Maze”. EU member states attempted to follow these rules through cuts to public spending and cancelling planned public investment. The report finds that this has left Europe less resilient to economic shocks like the Covid-19 pandemic and the Russian invasion of Ukraine.

Excessive public spending cuts in the EU, brought in following the 2008 financial crisis, have led to a permanent scarring of incomes, and cuts to spending on infrastructure and vital public services. Low levels of gross domestic product (GDP) growth led to a fall in tax intakes for governments, increasing government debt. Major European governments that were prevented from vital public spending as a result of these EU rules experienced lower levels of growth over the last decade, the research finds. The report finds that countries like Greece and Italy that pursued greater austerity and cuts to public spending ended up with higher government debt levels.

The impact of spending cuts on disposable incomes differs greatly across the EU. In Germany incomes only dropped 1% compared to the pre-2008 trend, while incomes in Finland and the Netherlands were 15% to 16% lower. Of the countries analysed, Ireland and Spain were hardest hit, with average incomes dropping by 29% and 25% respectively.

Polling commissioned by NEF and Finance Watch and conducted by Censuswide earlier this year found that two out of three Europeans polled agree that rules around spending should be changed to allow governments to spend more on education, health, social care and jobs. 70% of people reported concern about the effects that reintroducing austerity could have. However, 70% of respondents also reported concern about rising government debt. The report argues that restrictions on public spending are not the answer to these concerns, as countries which implemented harsher public spending cuts ended up with higher debt levels.

Finance Watch has made a series of proposals to reform EU’s fiscal rules that are no longer fit for purpose.

Policy Brief – “From Maastricht to Paris: Why climate change should be considered in a reformed EU fiscal framework”

Thirty years after the Maastricht treaty and twelve years after the Paris agreement, connections between climate change, debt sustainability, and the reform of the EU economic governance are often overlooked....