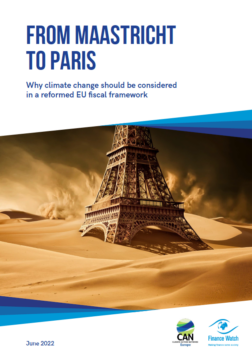 Thirty years after the Maastricht treaty and twelve years after the Paris agreement, connections between climate change, debt sustainability, and the reform of the EU economic governance are often overlooked. This joint policy brief of Finance Watch and Climate Action Network Europe seeks to unpack these connections, and formulates key recommendations which can shape the reform of the EU fiscal rules.

Adopted 30 years ago, the Maastricht Treaty placed limits on EU Member States debt and deficit levels to 60% and 3% of a country’s GDP. Historically, debt servicing costs were a significant part of Member States budgets. Binding numerical fiscal limits were therefore perceived as a necessity to ensure that Member States could continue to service their debt – hence limiting contagion risks inside the euro area – without assistance by other members or by the European Central Bank. The Treaty arbitrarily limits the debt and deficit levels to, respectively, 60% and 3% of a country’s GDP. How to implement those rules has been further detailed in the Stability and Growth Pact.

Concerns about debt sustainability risks appear today inflated compared to climate, environmental, and socio-economic challenges Europe is facing. Whilst servicing public debt has never cost so little to European governments, the existential threat from climate change and its impacts on the economy and public finance is becoming clearer every day – from agricultural productivity to energy production, health impacts from water, air and soil pollution, to the destruction of infrastructure due to extreme weather events.

In 2015, with the Paris Agreement on climate change, governments committed to limit the increase in global average temperature to well below 2°C degrees, and to pursue efforts to limit global temperature rise to an even more ambitious 1.5°C target. The Paris Agreement indicates that private and public financial flows need to be made “consistent with a pathway towards low greenhouse gas emissions and climate-resilient development.”

[1] According to the Council Directive 2011/85/EU that institutes national fiscal frameworks, EU Member States have to prepare and execute their budget according to a set of minimum requirements. This directive also outlines the role Independent Fiscal Institutions (IFIs) play in monitoring Member States compliance with fiscal rules and providing economic and budgetary forecasts.

[2] These analyses would account for country-specific drivers of unsustainable debt  such as the evolution of interest payment-to-GDP, interest growth (r/g) differential, share of short-term debt and foreign-held debt on total debt stock, average maturity of the debt stock, and the building up of fiscal risks.

[3] In particular, the effective functioning of IFIs should be supported by enhanced minimum national framework standards in EU Member States. Building on best practices, these minimum standards should ensure e.g. functional autonomy, access to information, safeguards from political pressures, etc. Crucially, these standards should ensure governance arrangements that shield IFIs from being captured by any school of thought. More in: SUTTOR-SOREL, L., “Breaking the Stalemate”, Finance Watch, 2022, p.19.

[5] Future-oriented expenditures cover categories such as public investment, green expenditures, and productive social expenditures such as spending on education (i.e. investment in human capital) and healthcare – both associated with a positive impact on GDP growth.