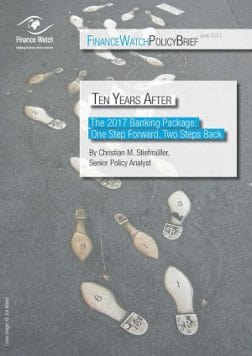 The Policy Briefing includes recommendations on bank capital requirements, leverage ratio, supervision, resolution (and the problematic “precautionary recapitalisation”) and proportionality, among other things.

“Ten years after the onset of the most serious financial crisis in recent history the EU is preparing to put the finishing touches on the centrepiece of its post-crisis regulatory project. The Banking Package incorporates the last batch of key international standards into EU law, albeit in a curiously reluctant and unambitious way. At the same time it also begins to unpick significant elements of the existing prudential framework. Given that many of the root causes of the last crisis remain unresolved, while governments and central banks resort to monetary stimulus at an unprecedented scale to compensate for the continuing fragility of the financial system, there are in our view no grounds for complacency, let alone a return to “business as usual”. The economic recovery in Europe is still fragile. The EU in general, and some Member States in particular, would be hard-pressed to absorb another systemic crisis. Further reforms to improve the resilience of the banking sector are still needed to turn the current cyclical recovery into a sustainable structural recovery.

Finance Watch welcomes the European Commission’s legislative proposal, which incorporates important new  international standards into European law. We do not share the view, however, that the regulatory effort prompted by the last financial crisis is nearly complete and may even have gone too far. There is, in our view, no convincing case for reversing the regulatory progress of recent years.“

What the Squid Game reveals about the problem of over-indebtedness, and why we should have structural answers to it