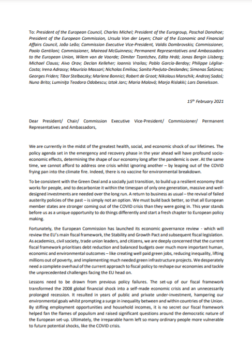 We are currently in the midst of the greatest health, social, and economic shock of our lifetimes. The  policy agenda set in the emergency and recovery phase in the year ahead will have profound socio economic effects, determining the shape of our economy long after the pandemic is over. At the same  time, we cannot afford to address one crisis whilst ignoring another – by leaping out of the COVID  frying pan into the climate fire. Indeed, there is no vaccine for environmental breakdown.

To be consistent with the Green Deal and a socially just transition, to build up a resilient economy that  works for people, and to decarbonize it within the timespan of only one generation, massive and well designed investments are needed over the long run. A return to business as usual – the revival of failed  austerity policies of the past – is simply not an option. We must build back better, so that all European  member states are stronger coming out of the COVID crisis than they were going in. This year stands  before us as a unique opportunity to do things differently and start a fresh chapter to European policy  making.

Fortunately, the European Commission has launched its economic governance review – which will  review the EU’s main fiscal framework, the Stability and Growth Pact and subsequent fiscal legislation.  As academics, civil society, trade union leaders, and citizens, we are deeply concerned that the current  fiscal framework prioritises debt reduction and balanced budgets over much more important human,  economic and environmental outcomes – like creating well paid green jobs, reducing inequality, lifting  millions out of poverty, and implementing much needed green infrastructure projects. We desperately  need a complete overhaul of the current approach to fiscal policy to reshape our economies and tackle  the unprecedented challenges facing the EU head on.

Lessons need to be drawn from previous policy failures. The set-up of our fiscal framework  transformed the 2008 global financial shock into a self-made economic crisis and an unnecessarily  prolonged recession. It resulted in years of public and private under-investment, hampering our  environmental goals whilst prompting a surge in inequality between and within countries of the Union.  By stifling employment opportunities and household incomes, it is no secret our fiscal framework  helped fan the flames of populism and raised significant questions around the democratic nature of  the European set-up. Ultimately, the irreparable harm left so many ordinary people more vulnerable  to future potential shocks, like the COVID crisis.

The scale of the crisis and severity of the economic downturn forced the temporary suspension of  fiscal rules – simplistic and arbitrary limits for public debt and borrowing. To protect European citizens  and businesses, to support the economy following the pandemic, the Commission deemed – and  Member States agreed – more fiscal flexibility was necessary than permitted under our fiscal  framework. Meanwhile, the NextGenerationEU package and the Recovery and Resilience Facility were  agreed; recognising that the European Union needs a flexible and sizable central budget to address  imbalances between countries and enhanced upwards social and economic convergence.

But the conditions that warranted these temporary measures were true before and will remain long  after the crisis is over. It is therefore vital that the old fiscal framework is not reapplied before new  economic governance and flexible principles to coordinate fiscal policies within the Union are agreed.  Rejuvenating and re-establishing fiscal policy as the primary tool of macroeconomic management  deserves an open and public debate.

Fiscal policy should be an enabler, not the chain that holds economies back. Our fiscal framework  needs to be aligned, not at odds, with stated goals of full employment and environmental protection  laid out in the Treaty of the European Union. Whilst welcome, an enhanced EU level budget alone will  not be enough to meet these goals, national fiscal policy must be empowered too. Indeed, as we  continue to face growing uncertainties, arbitrary numerical fiscal rules are simply not fit for purpose.

Tinkering around the edges with incremental changes will fall wide of the mark. The European  Commission needs to seize the current narrow window of opportunity to spearhead a significant  paradigm and narrative shift. It is all the more urgent to turn fiscal policy from an end to a means, and  think more functionally about what the wider economy, society and the planet we inhabit really need.  Getting policy right in this area is one of the single most important priorities for recovering from  Europe’s greatest peacetime recession and addressing social and ecological challenges.

We realise that the reform will not be simple and completed over night. We ask you to use the  following principles as a bedrock when rethinking the current fiscal framework. We believe that if  these principles are not met – you are going to fail the people and future generations of Europe.

Of course, looking only at the sheer quantity of borrowing is not sufficient. Public spending and  revenues cannot simply be aimed at providing measures to boost GDP growth with no consideration  of the impact on future public prosperity or resilience. Economic and fiscal policy need to be primarily  guided through a lens of broader public good and wellbeing, reducing inequality and meeting  ecological commitments.

Far from making fiscal policy more responsible, the current fiscal framework is the exemplar of  irresponsibility – the EU’s consistent failure to meet its own goals on environmental protection and  full employment are indicative of this. The price of inaction will prove far more costly to governments  and society in the long run. We have high hopes and we are looking forward to an open-minded debate

without prejudice. No stone should be left unturned. You can count on our support in delivering this  transformative agenda, and we look forward to your next steps.

Francisco Ferreira, President, ZERO – Association for the Sustainability of the Earth System (Portugal)

Csaba Csóti, President of the Forum for the Co-operation of Trade Unions (SZEF) Hungary

Benjamin Braun, Max Planck Institute for the Study of Societies

James K. Galbraith, The University of Texas at Austin

10 Principles for a Sustainable Recovery

On 2 October 2020, Finance Watch published a briefing paper to help legislators strengthen the proposed Recovery and Resilience Facility (RRF), which makes up the core of the EU’s EUR...

The German-language version of an open letter sent in February to European Union leaders asking them to review EU economic governance.