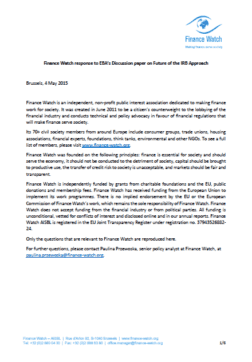 Finance Watch response to the European Banking Authority’s discussion paper and consultation on the future of the Internal Ratings-Based (IRB) Approach to measuring capital requirements.

The Internal Ratings-Based (IRB) Approach allows banks to use their own risk models to calculate their risk-weighted assets (RWAs) for credit risk. The European Banking Authority (EBA) rightly notes in its consultation document that the main incentive for banks to use the IRB Approach, rather than using the Standardised Approach, is the potential gain in terms of a lower overall capital requirement.

Finance Watch supports the implementation of mandatory disclosures such as disclosures from the benchmarking exercise and the RWA calculated under the Standardized Approach for IRB banks, as they will have a strong positive impact by reducing divergences and enhancing understanding of banks’ risk management.

We consider simplification of the credit risk mitigation (CRM) framework and its robustness from a financial stability point of view as a major issue that should not be treated as a low regulatory priority. We urge EBA to recommend that the Commission legislate in this area.

We support the harmonization of exposure classes for the IRB and standardized approaches as this would increase comparability and transparency.

We also welcome the EBA initiative to consider a more fundamental review of the IRB Approach.

Bearing in mind the shortcomings of internal models, arising mostly from model uncertainty, complexity and regulatory arbitrage, Finance Watch is convinced that the regulatory framework should not rely on them as a major Pillar 1 indicator of capital. A simple leverage ratio has been shown to be a much better predictor of banks’ distance to default.

Therefore, until a major re-think regarding the role of internal models and risk weighted capital ratios is accomplished, it is important to introduce a leverage cap as a binding Pillar 1 measure and to keep the Basel I floor or introduce the Standardized Approach floor (provided that it will not result in a softened prudential treatment) as put forward by the Basel Committee on Banking Supervision.

Debt as an Opportunity or Risk: A Gender Perspective