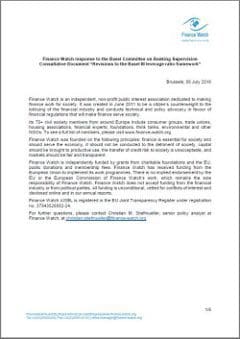 Finance Watch welcomes the agreement of the Group of Central Bank Governors and Heads of Supervision of the Basel Committee on Banking Supervision (BCBS) to introduce the Basel III leverage ratio (LR) as a Pillar 1 measure by 1 January 2018.

The build-up of excessive leverage has proven to be one of the main threats to financial stability in 2007/08 crisis and many of the crises before. The leverage ratio has been identified as a significantly more reliable indicator of a bank’s distance to default than risk-based capital measures. It is also simple for banks to implement and more transparent for regulators to monitor and review. Finally, it is more responsive to cyclicality than RWA-based measures and hence a more effective tool to manage excessive credit creation during cyclical upturns.