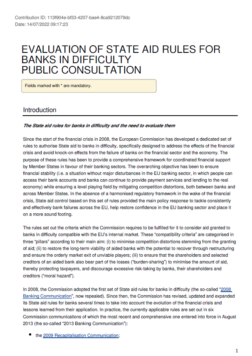 In its response to the European Commission’s consultation on the Evaluation of State Aid Rules for Banks in Difficulty, Finance Watch highlights persistent flaws in the legal framework for the recovery and resolution of distressed banks in the EU.

Nearly ten years after the crisis, it was meant to address the 2013 Banking Communication remains in force – an outdated instrument which deviates in key points from the EU’s bank recovery and resolution framework. In combination with the absence of a harmonised legal framework for bank insolvency and liquidation, the 2013 Banking Communication severely dilutes the effectiveness and damages the credibility of that framework, leaving taxpayers at risk again of bearing the cost of bailing out failed banks.

In its recent assessment of the resolvability of major EU banks released yesterday, the Single Resolution Board (SRB) notes significant progress has been made to render the bank recovery and resolution framework operational. At the same time, the SRB acknowledges that substantial work still needs to be done to ensure that the largest banks can indeed be resolved without recourse to taxpayers.

In our view, supervisory and resolution authorities should maintain the pressure on major EU institutions to improve their financial resilience and adapt their organisations, in order for recovery and resolution plans to be implemented safely in a time of need. The 2013 Banking Communication has long outlived its usefulness and should be revoked. Updating rather than repealing the State Aid framework for banks, would suggest that state aid should somehow remain available to the banking sector at preferential terms, a notion that contradicts the central objective of the SRM.

State aid should no longer be available to banks that are considered by the regulators to be neither ‘systemically important’ nor ‘significant’. These banks should be wound up under the respective national bank insolvency and liquidation frameworks, strictly without recourse to extraordinary public financial support (i.e. state aid).

To this end, and to protect the effectiveness and credibility of the EU’s bank recovery and resolution framework, a legislative proposal by the European Commission is needed to harmonise member states’ legal frameworks for the insolvency and liquidation of banks in line with the principles set out in the Bank Recovery and Resolution Directive (BRRD) and the Single Resolution Mechanism Regulation (SRMR).

Comments on the current debate regarding bank bail-in and recapitalisation

The Bank Structural Reform must separate substantially all trading – including market making and derivatives – from deposit banking activities. BSR is strongly opposed by the banking lobby and by...