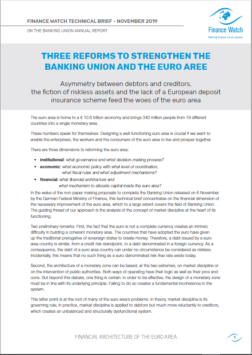 As a complement to a hearing held on 7 November 2019 by MEP Pedro Marques as rapporteur for the Banking Union Annual Report, Finance Watch published a technical brief on the financial architecture of the Euro Area.

The three following reforms should be implemented if euro area policy-makers want to make the rules governing the area coherent.

Presentation by Finance Watch Secretary General Thierry Philipponnat at the Third Congress on Finance Ethics, the “Finethikon”, 26 October 2012, about the problems of moral hazard and banking structure in repation to...

Cheat sheet: What is Banking Union (SRM and SSM)?

Background Actions of Finance Watch Key risks and our Publications on this dossier Background Banking Union is a political project lunched in summer 2012 to address the trends against financial...