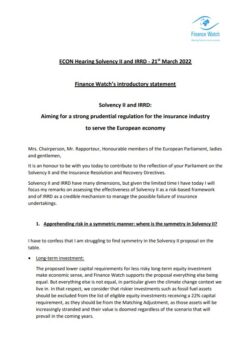 At the ECON Hearing on Solvency II and IRRD, Finance Watch calls for a symetric approach to risk assessment, adapting insurance companies’ capital requirements linked to fossil fuel exposures and creating a resolution funding mechanism to avoid the transfer of losses to policyholders and taxpayers in case of failure (video here)

In its introductory statement at the ECON Hearing Solvency II and IRRD on 21st March 2022, Finance Watch’s Chief Economist, Thierry Philipponnat, called for a strong prudential regulation for the insurance industry to serve the European economy:

It is an honour to be with you today to contribute to the reflection of your Parliament on the Solvency II and the Insurance Resolution and Recovery Directives.

Solvency II and IRRD have many dimensions, but given the limited time I have today I will focus my remarks on assessing the effectiveness of Solvency II as a risk-based framework and of IRRD as a credible mechanism to manage the possible failure of insurance undertakings.

1. Apprehending risk in a symmetric manner: where is the symmetry in Solvency II?

I have to confess that I am struggling to find symmetry in the Solvency II proposal on the table.

In a stranded assets context where there is no scenario under which fossil fuel assets can prosper in the now near future with a planet carbon budget equal to 8 years, the insurance industry will be seriously threatened by climate change unless we get our act together now and adapt insurance companies’ capital requirements linked to fossil fuel exposures.

At the end of the day, this comes down to apprehending time horizons in a coherent manner in order to apprehend risk. As stated previously, if longer time horizons lead to a lower risk assessment, then capital requirements can be lower; but if they lead to a higher assessment of risk, then capital requirements should be higher. This has far reaching consequences both for the ability of the financial system to orient capital towards developing a sustainable economy (financiers’ job is to put a price on a risk) and for financial stability.

Your Parliament has now the opportunity to adopt the Pillar 1 measures that will enable the European insurance industry to withstand the worst effects of climate change and therefore avoid adding a new financial crisis on top of the looming climate crisis. This must be done at Pillar 1 level as there is so much Pillar 2 measures can do, and climate scenario analyses, however useful, should be taken for what they are, i.e. analysis, not action.

3. IRRD should provide an efficient and credible mechanism to manage the possible failure of insurance undertakings

IRRD is a welcome development and provides the right tools to deal with an insurance undertaking if and when it becomes likely to fail. However, IRRD does not provide for the means of reaching the objectives it gives itself. This questions its credibility when it comes to protecting policyholders and taxpayers from the consequences of the failure of an insurance company whilst maintaining financial stability.

As pointed out in the impact assessment, “the balance sheet of an insurance company is essentially composed of liabilities towards policyholders (by opposition to equity or debt instruments), (and) past insolvencies of insurers have shown that policyholders need to absorb losses”.

Such a mattress can be easily created by inserting in IRRD an insurance equivalent of the banking Minimum Required Eligible Liabilities (MREL) contained in BRRD or of the Financial Stability Board’s Total Loss Absorbing Capacity (TLAC). In essence, this would consist of making insurance undertakings issue loss absorbing subordinated debt (so-called bail-inable debt) that bond investors would buy. If we do not adopt such a mechanism, the risk will effectively be borne by policyholders and by society for free. It is not a question of applying mechanically banking regulation to insurers, which obviously would not be appropriate, but of who bears the risk.

Importantly for our debate and drawing from experience, we should bear in mind that the existence of TLAC has not prevented banks throughout the world from conducting profitable business, that the impact on the weighted average cost of capital of insurance companies issuing the debt would be minimal, and that investors would be happy to invest in such higher yielding debt. The choice we are facing here is therefore between putting in place a sound financial mechanism or perpetuating moral hazard in our financial system to the detriment of society.

Report – Insuring the uninsurable: Tackling the link between climate change and financial instability in the insurance sector

Consultation response on the review of Solvency II

On 21 October 2020, Finance Watch published its response to the European Commission’s consultation on the review of prudential rules for insurance and reinsurance companies.

You enjoyed the last financial crisis? You will love the next one, still more devastating…