Current bank prudential regulation allows large banks to use their internal models to calculate their risk weights. In other words, large banks are allowed a lot of leeway to determine the minimum amount of their own money they should use to fund their investments.

There is compelling evidence that the use of internal models for determining regulatory capital has led to rampant regulatory arbitrage, huge variations in risk weightings and a steady decline in regulatory capital levels. The near-random variability of risk-weightings across banks was aptly illustrated by a study from Standard & Poor’s, a rating agency, which found that different banks applied vastly different risk weights to almost identical assets 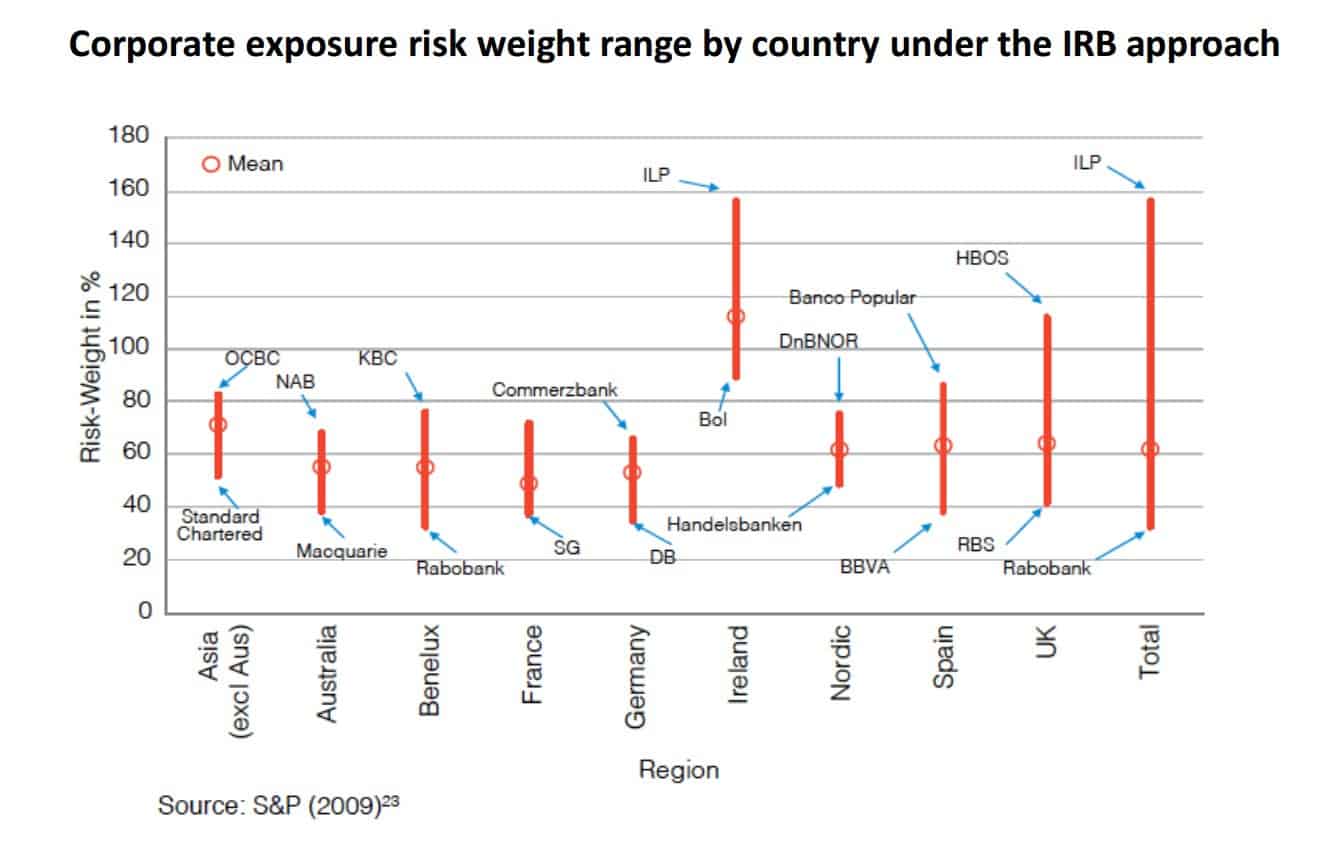 Smaller banks, on the contrary, use a so-called “standardised approach” that provides them with a set of risk weightings based on the risk and maturity of the asset. This approach is more credible, less susceptible to gaming and strengthens markets’ and citizens’ trust in the health of the banking sector but places these smaller banks at a disadvantage compared to larger rivals, which are able to fine tune their capital ratios. The result distorts competition and reduces the diversity of the financial ecosystem.

Having recognised the problem with internal models, the Basel Committee on Banking Supervision has decided recently to restrict the use of internal modelsby large banks and to align them more closely with the standardised approach. While this is certainly a step in the right direction this partial review may, arguably, not go far enough in bridging the gap and removing excess variability from regulatory capital calculations.

Even so, some bank trade associations have been very vocal recently over this initiative, calling it misleadingly this initiative “Basel IV”, implying that this would be a new version of bank prudential regulation Basel III (agreed in 2010-2011 with implementations phasing in between 2013 and 2019), when it’s only really a partial fix of well-known issues rather than new standards. These banks claim that this would be a move backward to a less risk-sensitive and hence less accurate approach and that it would increase regulatory capital requirements for banks and, as a result, lead to a decline in lending to the real economy.

Originally, under Basel I (agreed in 1988 with implementation in 1992), prudential regulation involved a simple set of rules with only a limited number of risk categories. Bank lobbies claimed at the time that this approach did not sufficiently differentiate between assets of the same class but with different risk profiles, so that banks would be inherently incentivised to invest in the riskier assets, which carry a higher return. In response to this critique Basel II (agreed in 2004 with implementation in 2008) gave banks extensive freedoms to use their internal models, and regulatory capital and bank solvency have been in steady decline ever since.

If we agree, however, that the purpose of prudential regulation is not to micro-manage banks and tell them what to invest in but instead is purely to be a backstop, then that backstop does not need to be risk-sensitive – all it needs to be is robust.

Regarding the second claim: addressing the issues of internal models could indeed require banks to have more regulatory capital – and that would be a good thing. Nearly ten years after the last crisis broke banks are still poorly capitalised and overleveraged.

To get a sense of current bank prudential regulation one example is very telling: some bank lobbies are currently fighting against a leverage ratio of 3% of total assets or a cap of 33 times equity. A leverage cap at 33 times equity means that a bank needs no more than €3 of its own capital to make a loan of €100 – the remainder is borrowed from the capital markets or from other banks and depositors. In turn, it also means that should 3% of the loans not be repaid, the bank is bankrupt.

Regarding the claim that increasing bank regulatory capital would lead to a shortage of funding to the real economy, two facts are important to bear in mind:

First, ECB surveys regularly indicate that there is no shortage of funding to the real economy.

Second, it is important to realise that large banks currently allocate only a portion of their balance sheet to loans to non-financial corporations and households. It follows that if they were to reduce the overall size of their activities, this would not automatically translate into a reduction of lending to the real economy – indeed it would be the management’s choice to prioritise other, presumably more profitable, activities. This misalignment of incentives could be better addressed by means of a structural separation of core banking and capital markets trading activities but so far this policy has not gathered sufficient political support.

What this really boils down to is not at all a question of capacity to lend to the real economy, but instead a question of profitability for the banks. We do acknowledge that bank profitability is currently under pressure, but this is due mainly to persistently very low interest rates, themselves a consequence of the crisis caused by the banks, not to prudential regulation.

It is also interesting to note that one of the main reasons why banks have a strong interest in minimising their capital is the fact that there is a tax subsidy for debt, not for equity.

Addressing well-known issues in the calculation of banks’ regulatory capital would improve the consistency and credibility of the rules. This would in turn increase market trust in banks’ health and should over time translate into a decline of the rate of return expected by shareholders.

We should not buy into the biased narrative that making our banking system safer will automatically lead to a decline in lending to the real economy.

Given the enormous cost of banking crises, we should prioritise financial stability over short-term profitability, as we do in other sectors: reducing the frequency of maintenance visits on airplanes would surely improve the short term profitability of airline companies, yet despite the difficulties of the sector we do not do it. Why should it be different for banks?