This week, the too-big-to-fail bank lobbyist Jose Manuel Campa has been nominated to be the new head of the European Banking Authority – the very authority that is in charge of supervising those powerful banks. For Duncan Lindo this is yet another sign of how little the crisis changed our financial system.

The European Banking Authority (EBA) is one of the most important organisations overseeing rules and setting technical standards for banks in the European Union. You might think that the head of this organisation would be appointed by a democratic process which chose a candidate from a diverse field to fight for the representation of public interest in banking. Well you’d be wrong.

This week it emerged that the nomination for the new head of the European Banking Authority is to be Jose Manuel Campa (apparently there were no women on the shortlist). Campa is currently employed in a very senior position at Santander. His job there is called ‘global head of regulatory affairs’. In other words he is currently paid to lobby regulators, such as the EBA, to change the rules so that they favour big banks like Santander, or at least don’t inconvenience them too much. And before long he will most likely be in charge of overseeing those rules.

You might argue that Campa knows how too-big-to-fail banks think  (Santander are still on the FSB’s list of Global Systemically Important Banks – the ones that were at the centre of the financial crisis 10 years ago).  More likely he will carry on thinking like a too-big-to-fail banker in his new job.  (By the way it’s not like he’s the first: famously former Commission president Barrosso joined the “great vampire squid wrapped around the face of humanity” (i.e. Goldman Sachs) in 2016, former Commissioner for Finance Jonathan Hill moved to a lobby firm in 2017 and so on). It’s become so common for politicians and regulators to go on to work for those they were regulating (and the other way around) that it’s become known as “the revolving door” problem. In a year of European Parliament elections, with anti-European forces predicted to do well you might think European leaders would be a bit more careful, at least, about the image they project.

One of the many problems with the so-called revolving door between regulators and bankers is groupthink. By appointing a white male from the European elite (he has also been a professor and a government minister) we are very unlikely to change the ways we think about banks in Europe. Society is facing an enormous range of issues, not least a social and environmental crisis and today’s financial system is a part of the problem. More of the same, or worse still easier rules for banks, is not going to get us out of this mess.

What’s more there are many other problems with with financial lobbying. As the Corporate Europe Observatory said, ten years after the crisis, the financial lobby won the battle . Finance lobbyists massively outnumber and outspend civil society organisations, look at who advises the European Central Bank for example (another powerful European finance body with a democratic deficit). Banks and financial firms also organise themselves into very powerful lobby organisations, and activists (such as the TNI) and academics are now pointing out that lobbyists such as the Institute of International Finance (IIF) are a big part of the reason why ten years from the most destructive financial crisis since the 1930s it is the people in the street and not the bankers that are still suffering. 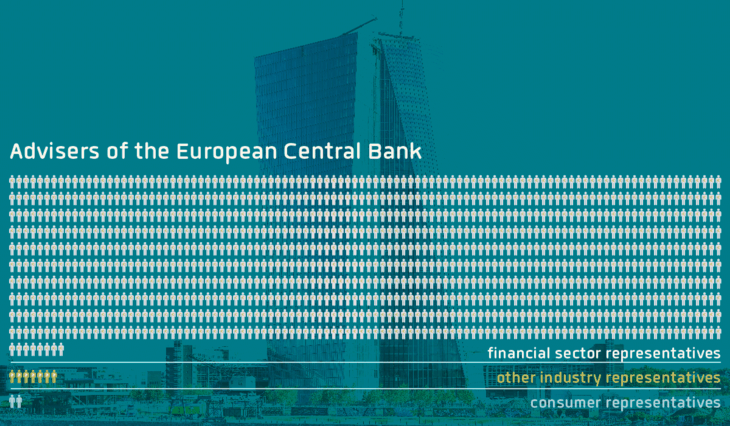 Source: CEO report “Open door for forces of finance at the ECB”, 2017

The power of the financial lobby to, for example, tilt the playing field in favour of too-big-to-fail banks, to allow shadow banking to continue unregulated, to enable massive tax evasion through offshore finance shows us what we are really up against. Governments could end too-big-to-fail, shadow banking and offshore finance in a few strokes of the lawmakers’ pen. But they are in thrall to the power of finance. The Occupy movement gave us the idea of the global 1%. Today organisations like Oxfam show us that the 1%, and an even smaller global elite, have more wealth, and with it more power, than billions of the poorest.

When we try to make finance serve society we need to be aware of this enormous power of finance to coerce governments into working for them. But we can make a difference with what might seem to be small first steps. Changing the rules on revolving doors and lobbying makes it a bit harder for the finance lobby and a bit easier for normal people to have their voices heard.

No excuse: Simple rules to protect against lobby power exist in other sectors

The Transnational Institute’s (TNI) State of Power report in 2019 explores many of the ways this great power is exerted but also explores some of the ways we might start fighting back. Recent moves to improve the transparency register of lobbyists in Brussels are another positive development, a good start. Another idea, seemingly simple but that had a great effect in regulating the tobacco industry, is to oblige authorities to protect rule making from undue influence of the financial lobby. A seemingly simple article, “article 5.3” in the World Health Organisation’s convention on Tobacco control, went a long way. It helped to protect public health policies from commercial and other vested interests of the tobacco industry. Why shouldn’t we put in place a similar rule to the financial sector?

The appointment of a too-big-to-fail banker to be head of one of Europe’s most important bank supervisory bodies is a worrying symptom that little has changed since the crisis. And it’s the tip of the iceberg of the ways in which the finance lobby is winning most battles to avoid stricter rules, and of the ways in which finance exerts its power over society more generally. Rutger Bergman made headlines around the world again this week by speaking truth to power. We need to do the same if we are to make finance serve society. One way to do so in the year of European elections is to challenge this appointment.

Deutsche Bank “too small to scale”? You cannot be serious…