Photo by Rostyslav Savchyn on Unsplash

Corporate Europe Observatory’s (CEO) latest report sheds a harsh light on how private interests benefit from EU states’ opaque, anti-democratic practices. But it also outlines real solutions, that could transform the existing culture of collusion and lower the risks of legislative capture.

Faced with the rise of populism in Europe, it’s all too convenient for national politicians  to lay the blame at the door of a disconnected European bureaucracy deaf to citizens’ dissatisfactions, caged by rigid regulations. But they would perhaps be better served getting their own house in order.. …for, while the European Parliament has just agreed to publish all meetings of MEPs with representatives of “influence groups”, European nation states are far from applying such transparency in their relations with industry and “interest groups”.

Some key issues frozen by lobbyists

This is where CEO’s latest report “Captured states: when EU governments are a channel for corporate interests” stands out. It outlines the national government’s responsibility in the design, approval and implementation of European legislation, and finely deciphers the channels through which the influence of lobbies is exerted on national governments and ultimately on European directives and regulations. Too often, the Member States are merely representing private interests within the European institutions, and this in the greatest opacity. The CEO report sheds a raw but salutary light on these anti-democratic practices. It paints a picture of nation states under the influence of private interests. Private interests that favor industrialists and financiers to the detriment of those of the society they are supposed to serve, while they pretend to believe in the convergence between these private interests and the collective interest.

This is not CEO’s first report.  As in each of its reports, the analyses are thorough, the data are new and reveal powerful and insidious channels for powerful private interests to capture public authorities, escaping the radar of citizen control. The focus here is on European institutions that are crucial in the production of European laws and rules: the Council, the European Council and the committees of experts that discuss the scientific foundations on which decisions are based and the technical details of the rules. However, everyone knows that the devil is in the details….. Institutional arrangements such as the rotating presidency offer privileged moments for nation states, temporary agenda keepers, to push issues in favor of their national champions.

Some of the most popular “dossiers” within European citizens, such as the ban on Glyphosate, the financial transaction tax, or an ambitious climate policy are hampered and blocked by the closeness of  powerful lobbies and certain governments. The latter, acting as spokespersons, are opposed to an ambitious European policy on these subjects of undoubtable public interest. This is the case for the proximity between German leaders and the automotive industry or between the French government and the banking and finance lobbies.

Transparency as a democratic imperative

It is obvious from this report that public decision-making and its motivations suffer from a blatant lack of transparency. The access to decision-makers and the institutions in which they operate is totally unbalanced in favour of the private interests of industry and finance. NGOs, trade unions and other representatives of civil society in all its diversity have the greatest difficulty in making their arguments heard, as they are largely excluded from the circles where decisions are made. These occult practices contribute greatly to the mistrust that people everywhere in Europe express towards their governments. These abuses do not simply have economic, social and environmental consequences. They also undermine the heart of our democracies, they flout the pact that binds voters to their representatives and makes a democratic society.

Because hope can only come from action and never from resignation, CEO does not settle for this gloomy and deadly diagnosis for our democracies but also outlines solutions. Fundamentally these solutions aim at changing the culture of collusion and adopting rules that keep capture risks at bay. How ?

By ensuring full transparency for lobbying, by strengthening the national parliaments’ right of scrutiny over European issues before decisions are taken, by answering for how and why decisions are taken. (accountability principles)

The democratic deficit revealed by this influence of lobbies on governments calls for a fundamental overhaul of the way the European Council, the European Commission and all the committees of experts that influence at a very early stage the shaping of European rules, regulations and laws.

In particular, they must be open to interests other than those of multinationals, and appointments must be transparent. Opening up decision-making spaces to the multiplicity of stakeholders is a democratic imperative. A genuine culture of transparency and declaration of conflicts of interest must be instilled in all the European institutions mentioned in CEO’s report.

Finally, citizens who too often turn away from Europe, could once again see it as their common future to re-appropriate the European agenda and influence decisions. But to do this, it is necessary to invent new models to help them to make their positions known and to influence the line taken by their own governments on all European issues: for example, participatory hearings at national level, online consultation, etc.

This aspiration for a “continuous” democracy is not a specificity of the “yellow jackets”, it is now a driving force behind every European citizens of all Member States. To address this would be to emerge from the democratic vacuum that erodes Europe and its institutions.

Let us hope that our national and European political decision-makers will be able to take up this report and understand that it offers them ideas capable of invigorating their credibility and European democracy.

Episode 3: A toast to populism (on the link between financial crises & extreme vote) 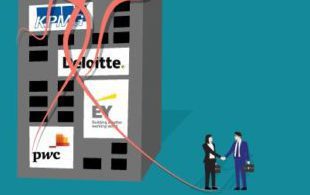 Accounting for influence: how the Big Four are embedded in EU tax avoidance policy