Compared to its neighbours France and Germany, Belgium passed a far more ambitious banking reform. However, as the contribution by Rosa Stucki from the Finance Watch member organisation Réseau Financité and Frank Vanaerschot from the NGO Fairfin will illustrate, the reform still falls short of guaranteeing systemic safety leaving many exceptions and loopholes, which is why the authors stress the need for ambitious reform at European level.

The Belgian banking reform (Art. 119) adopted in April 2014 and implemented as of January 2015 is an improvement to the former version and is more ambitious than similar laws in France or Germany. However, the law does not meet the demand to split banks which Financité, FairFin and Roosevelt.be campaigned for in 2013. Furthermore, if we compare the political statements and commitments made in the aftermath of the financial crash of 2008, the reform can be considered a setback. Most importantly, the new banking law is not sufficient to prevent another financial crisis.

A law from 1934 separated commercial from investment banking in Belgium – until its abolition in 1993. 22 years later we are faced with the economic and social consequences of the 2008 financial crisis. In a context where tax payers’ money was the only effective means to stop the self-ignited disintegration of the financial sector, politicians made bold claims, stating finance would be put under stricter control. In 2009, a parliamentary banking commission concluded that savings and investment banks should be separated and savings banks do not belong on the stock exchange.* 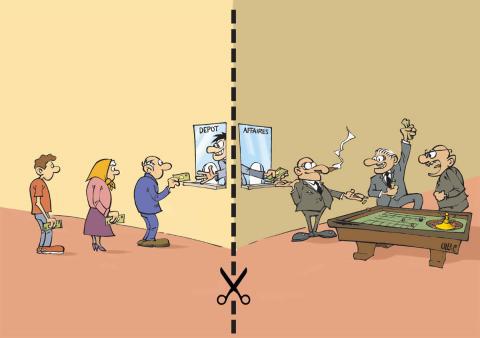 This did not materialise which is why, in 2013, a campaign led by Financité, FairFin and Roosevelt.be (www.scinderlesbanques.be) gathered 120 organisations and 15’000 citizens to demand from the Belgian government a banking reform that would include a clear separation of banking activities. In April 2014 the parliament adopted a proposal that appeared promising, but in reality is not sufficient to stabilise the sector. In addition, the proposal passed in quasi total silence from the media, politicians and the banking sector.

The Belgian banking reform includes a ban on proprietary trading, which was watered down significantly by numerous exceptions (including market making, liquidity management and hedging), hence weakening the proposal of separating certain trading activities from commercial banking. It is also up to the banks to prove that their proprietary trading corresponds to the criteria and limits fixed in the legislative proposal. This “grey zone” makes supervision difficult, whereby a clear separation of banking activities would facilitate the task.

Second, market activities are limited to a threshold of 15% of total assets. Every euro that exceeds this threshold needs to be covered by an equivalent in equity. However, this only has a limited impact on the Belgian banking system as it stands today, as most commercial banks have already limited their trading activities to under 15% since 2008, it seems that only two banks would be affected by this limitation. This limit of 15% is set in a federal governmental decree from December 2013, which means that it can be changed without parliamentary consent and hence debate.

While the Belgian proposal on banking reform is a step in the right direction, its numerous exceptions leave open a grey zone wherein commercial banks can continue to speculate and trade on risky financial instruments. It is therefore no guarantee to protect citizens from a new financial and economic crisis. This is why it is all the more important to mobilise at European level to maintain the Barnier proposal. Financité, FairFin and 15 other Belgian civil society organisations contributed by sending a letter to the various Belgian MEPs in the Economic and Monetary Affairs committee to encourage them to support the proposal that is currently being debated at the European Parliament, but more will need to be done to support an ambitious European regulation.