Photo by Dmitrii Vaccinium on Unsplash

The European recovery plan is a big step for the Union and a much-needed support to its economy but many questions remain to ensure the transition towards a sustainable economy.

As a direct consequence of an abrupt shut down of entire sectors of the economy for months, the EU economy is expected to contract by at least 8.3% in 2020 – with higher GDP-losses of around 9.5% in Greece, Spain, Italy and Croatia. In the absence of strong countermeasures, this sudden contraction of the EU economy is expected to have a long-lasting impact with around 180-260 000 European companies (~ 25 to 35 million employees) potentially experiencing a financing shortfall, and therefore at risk of bankruptcy by the end of the year.[1]

While these shortfalls are expected to be concentrated in firms already financially vulnerable[2] in hard-hit sectors (e.g. wholesale and retail trade, accommodation and food services, transport industries), EU leaders quickly recognized that the shutdown will both have an EU-wide impact – via a loss of demand and the disruption of many integrated value chains –, and an uneven distribution among the Member States. In fact, some Member States are expected to witness higher job losses than others – more than 5% in 2020 in France, Italy, Spain and Estonia.

In an attempt to deal with this exceptional situation, European leaders agreed on July 21th on a package worth €1 824.3 billion. It combines the EU’s 2021-2027 budget (MFF) amounting to €1074 billion and a new ‘Next Generation EU’ (NGEU) of €750 billion. This new recovery package is in principle aimed at addressing the damage caused by the pandemic, reducing risks of further EU fragmentation, while investing in a more green, digital, social and resilient European economy.

Leaving aside legitimate concerns about the size of this additional stimulus, there are still numerous other pending questions. We will briefly present the main elements of this deal while highlighting its limits or the issues it raises.

Our five take-aways on the deal

1. A first experiment of debt-financed deficit spending at the union level

Ending a decades-long saga about whether or not to jointly issue debt (i.e. debates on Eurobonds, blue bonds, ESBies), the authorization for the European Commission “to borrow funds on behalf of the Union on the capital markets” could well be a major step for the European political integration. While some EU leaders have pushed hard to ensure that “the powers granted to the Commission to borrow are clearly limited in size, duration and scope”, it sets a precedent.

Moreover, the progressive issuance of €750 billion of EU-denominated bonds to be reimbursed over a very long period (2038-2058) will create a market and a yield curve for all maturities of EU debt. Supported by an outstanding rating, EU Member States guarantees and ECB’s purchases[3], these EU-denominated bond issuances are likely to be a success which could help make the case for future joint issuance to tackle EU-wide challenges.

2. A less ambitious and future-oriented EU budget than initially planned

While negotiation led to cuts in both the grants[4] and the guarantees[5] components of the recovery package compared to earlier proposals on the table, it also came at the expense of reduced ambition to modernize the 2021-2027 EU budget. Under the pressure of so-called “frugal” Members, EU leaders have reduced the budget expected to be allocated to forward-looking programs aimed at investing strategically in the EU’s future (e.g. health, research, digital, international cooperation, strategic value chains). As a consequence, the EU budget will continue to be mostly directed towards agricultural subsidies (i.e. CAP) and aid to less-advanced regions (i.e. cohesion funds).

3. A new step towards a Taxation Union?

Since the recovery fund will temporarily increase the size of the EU budget, it will also require a correspondingly significant increase in revenues. With an EU budget mostly funded through GNI-based national contributions (~70%) – topped up with a share of customs duties, sugar levies (~13%) and VAT (~11%) –, the need to reimburse an additional €750 billion creates a new impetus to unlock the long-lasting debate on the basket of new own resources for the EU.

In their conclusion, EU leaders agreed on a new ‘tax on non-recycled plastic waste’ to apply as of January 2021 and on the principle of future ‘carbon border adjustment mechanisms’ and a ‘digital levy’ to be introduced by 2023. Meanwhile, the need to further specify the details and the call on the Commission to continue working towards the introduction of other own resources (e.g. a Financial Transaction Tax, and/or a CCCTB-based own resource) shows that the debate is only starting. In its July 23rd’s resolution, the European Parliament picked the fight by stating that it believes that “only the creation of new own resources can help to repay the EU’s debt” and that it “will not give its consent for the MFF without an agreement on the reform of the EU’s own resources system”.

4. Making the recovery an opportunity to strengthen the EU economy

To access the €672.5 billion of the ‘Recovery and Resilience Facility’ (i.e. €312.5 billion in grants, the rest in loans), Member States will be required to design tailored ‘National Recovery and Resilience Plans’, outlining their investment and reform agenda for the years 2021-2023. The Commission will then evaluate their compliance with country-specific challenges and priorities identified in the context of the European Semester, as well as their potential contribution to the green and digital transitions and to the growth potential of the economy.

While this could be a timely opportunity to address key social, environmental and economic challenges (e.g. ecological transition, tax avoidance, unemployment), the nature of the recommendation that will be made as part of the European Semester will be of utmost importance. While the European Semester recently evolved to integrate a social scoreboard (i.e. related to the European Pillar of Social Rights) and a monitoring of the Sustainable Development Goals (i.e. as part of the European Green Deal), these social and environmental components will have to be duly reflected in the Country Reports issued by the Commission in February. “Green and Just” should not be a nice to have: it should be at the heart of the Country Reports, Country-Specific Recommendations and National Recovery and Resilience Plans.

5. A rather vague green commitment

EU leaders committed to ensuring that 30% of the package will be oriented towards climate change mitigation (€550 billion of the overall €1826 billion), and to apply the ‘do no harm principle’ to all remaining spending. While these commitments fall short from bridging the green funding gap identified by the Commission (i.e. 370 billion per year until 2030), much uncertainty exists on their fulfilment:

First, the green conditionality of the recovery package needs to be strengthened. Considering the reduced ambition on several climate and future-oriented programs (e.g. Just Transition Funds, InvestEU) in comparison to earlier proposals, the greenness of this recovery package will heavily depend on the content of Member States’ ‘National Recovery and Resilience Plans’ to be officially submitted in April 2021 (draft proposals will be circulated as early as October this year). Meanwhile, the current safeguards are still relatively weak[6] and could be further strengthened. In the absence of a more granular EU-wide classification of unsustainable activities (i.e. the ‘Brown taxonomy’), this could be achieved by annexing a high-level Environmental and Climate exclusionary list that would specify what these national plans must not include.

Second, there is still a lack of appropriate methodology to track the use and impact of EU public funding on climate and the environment. With the current ex-ante assessment methodology strongly criticized by the European Court of Auditors, a more granular methodology will be needed to ensure the credibility of the green oath to ‘do no harm’, and to avoid climate-related spending risks to be overstated. We therefore welcome EU leaders’ request to the Commission to develop an effective methodology for monitoring climate spending and its performance.

The EU leaders’ agreement on the EU’s next seven-year budget (MFF) and an additional recovery fund (NGEU) has good and bad dimensions, but, as important as the agreement may be, it is only a step within a complex process.

In fact, for this deal to come to fruition, the Council and the European Parliament still have to agree on the size and composition of the MFF, and on the crucial details of the different regulations composing the new recovery funds (e.g. the Resilience and Recovery Facility Regulation). The content of the national recovery and resilience plans will also be shaped through a process which could offer significant room for improvement.

The challenge now is therefore:

[2] Between 60 and 75% of the total shortfall is attributable to firms already financially vulnerable (i.e. firms having a relatively high leverage or low profitability).

[6] While Article 16, §3 of the Recovery and Resilience Facility Regulation explicitly refers to the green AND digital transitions as criteria for Commission’s approval, annexe II, 2.2 further specify that the envisaged measure must contribute to the green OR the digital transition – which, obviously, makes a big difference. Furthermore, there is no specification yet on how to fulfil the commitment to avoid “adverse impacts of those measures on climate and environment.” (Annexe II, 2.4.). 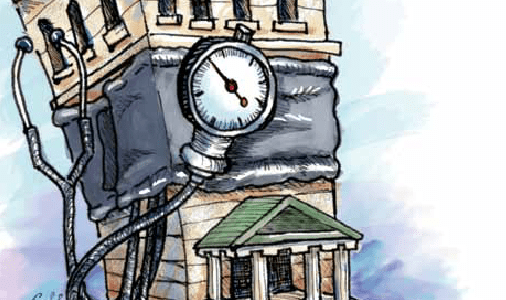 The cost of the COVID-19 crisis shines a light on the real value of anticipation in policymaking. Without doubt, even this tsunami will be dwarfed by the consequences of the...