Who sets the rules governing the financial sector? What interests are represented?

If we look at Europe, financial policy is made at the European level and often implemented through the EU’s legislative process.

However, several financial regulatory standards and guidelines are set by different financial bodies operating at an international level. The global financial system is very complex and ensuring its stability has become indispensable in the light of the latest global financial crisis. Over the years, governments have cooperated and established a multifaceted institutional structure for managing such a system with many international standard-setting bodies and informal fora working alongside international organisations.

Is this process democratic? What can be done to enhance accountability, transparency and citizens’ inclusion at the international level?

In our role as a citizens’ counter-lobby to the financial industry, Finance Watch pays close attention to the EU legislative process. But many of the EU’s rules begin their life in international bodies, far from Finance Watch and most citizens’ view. The need for international financial regulatory cooperation, accountability, and transparency has been voiced by the European Parliament ECON Committee, which, on 23 September 2015, debated the non-legislative draft report on “The role of the Union in international financial, monetary and regulatory institutions and bodies” by MEP Sylvie Goulard (ALDE).

As pointed out in the non-legislative report, the many existing international financial bodies show diversity in legal status, operating jurisdictions, internal structure, and competencies. For example, the IMF and the OECD are intergovernmental organisations established by international agreements: this means their members are countries and their status confers them legal personality. Then, the FSB, the BCBS, and the G20 are informal fora without any formal supranational authority: their decisions are not binding but remain relevant for their members, who are committed to implement them. Yet, the IOSCO, the IAIS, the IOPS, and the IASB legally are private organisations which have a sectoral public mandate. 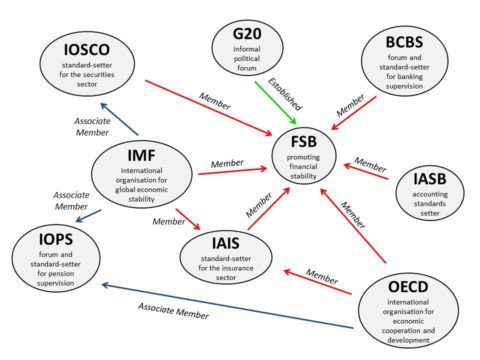 The parliamentary draft report highlights this fragmentation and diversity of international financial bodies and stresses the need for clarification of roles and international regulatory cooperation.

In addition, the report calls for the European Commission to take initiatives aiming at enhancing transparency and accountability in international fora. Draft proposals include setting a formal financial dialogue with the European Parliament and drafting a European code of conduct. In this regard, Finance Watch believes it is critical to ensure that EU representatives in these bodies are accountable to the European Parliament and that EU positions are determined through a transparent and democratic process. There is a need to ensure that international financial bodies engage in a dialogue not only with the financial industry but also with NGOs and other consumer groups. Implementing simple measures can make the difference, such as enabling public access to documents and introducing transparency registers.