Financial stability is impossible if depositors do not trust their banks. In the global financial crisis, bank runs caused by panicking depositors intensified banks’ liquidity shortages and caused spillovers to other sectors. The result was a decrease in lending, investments and production, and a severe and long lasting economic crisis. Therefore, to protect financial stability and the economy, financial policy needs to ensure that depositors trust the banking system.

Banks are uniquely prone to runs because they borrow short and lend long, creating a maturity mismatch in their balance sheets that is inherently unstable. This is, however, a necessary part of banks’ ability to provide liquidity to borrowers and depositors at the same time, one of the key economic functions of banks. Deposit insurance helps banks to sustain partially this maturity mismatch while reducing the chances of runs and contagion.

Deposit insurance also has a significant political appeal because it addresses citizen’s concerns about the safety of their deposits, especially in light of recent financial crises. On the other hand, it may exacerbate the very serious problem of moral hazard in banking.

Moral hazard became evident in the crisis when the implicit state backing of banks’ deposit-taking arms was made explicit through bail-outs. The safety net encouraged banks to develop highly leveraged and risky trades while being assured of public support in the event of a major loss. Banks had incentives to add risk because they could capture any profit but shift any losses to the state. The comforting assumption that banks would always be protected also reduced the incentives of investors first and depositors second to monitor banks properly.

For these reasons, governments have installed elaborate systems of banking regulation, supported by entry restrictions, activity restrictions, examinations, resolution regimes, commitments against bailout and sanctions. Deposit insurance adds to this system, especially if it is set up with risk reduction features, incentives for large depositors, investors and shareholders to monitor their banks (because of bail-in), and an institutional framework to allow enforcement of these safeguards.

The European Commission set up such an institutional framework in June 2012 with the Banking Union, whose aims include ending the “vicious circle” between banks and their sovereigns (when solvency problems at banks affect the solvency of the state and vice versa). So far, the Banking Union comprises two main pillars: the single supervisory mechanism (SSM) and the single resolution mechanism and fund (SRM/SRF). A third pillar, common deposit insurance, also announced as a key component in June 2012, proved controversial with some member states and so a political decision was taken to base it on “harmonized” rules at the national level, undermining efforts to weaken the “vicious circle”. These efforts were further undermined by the resolution regime, which leaves responsibility for dealing with failed banks partially at the national level, and the continued lack of a European fiscal backstop, which means national taxpayers are still the final backstop.

The proposal for a European Deposit Insurance Scheme (EDIS) is therefore seen as an incremental, but insufficient, component of a truly single European banking system and a natural complement to the single currency, since it would ensure, in theory, the same level of confidence in the safety of deposits irrespective of their location. Moreover, EDIS would align the control of European deposit protection with liability for it. As banking supervision and resolution were lifted to the European level, deposit protection should follow. A part of the logic of the Banking Union seems to be geographical: banks have grown too large for their sovereigns, in part because of their international operations and in part because of their trading operations; therefore the solution is to move resolution to the European level. As some of the changes to banks over the last 25 years have been caused by cross border expansion within the European Union and the Europeanization of the banking sector, there is some logic to this move. 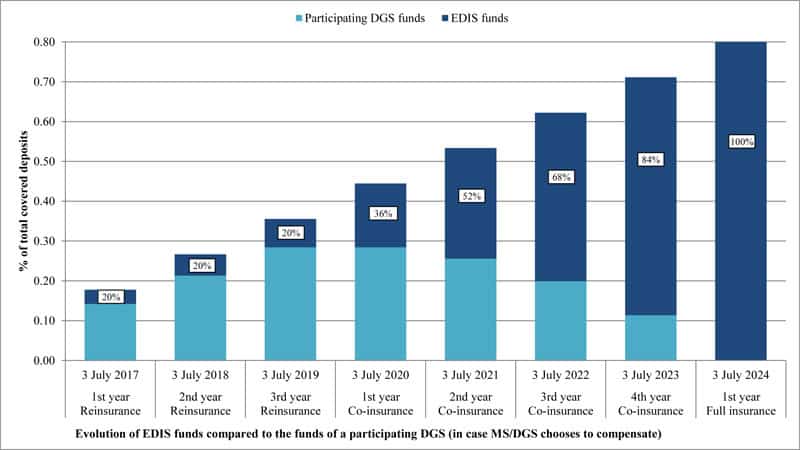 A phased implementation of EDIS

The Commission’s proposal on EDIS looks reasonable, although the final outcome will be decided by the co-legislators: the Council and the European Parliament. The variety of political objectives among different member state suggests that negotiations will not be easy. Proposals on mutualisation and borrowing capacity were previously rejected by some member states while negotiating the deposit guarantee scheme directive of 2010. With EDIS, these become a focal point once again as EDIS aims to move responsibility to the European level in three stages. It starts with the re-insurance system based on the national deposit schemes, gradually moving to coinsurance, and ending with a fully mutualized EDIS by 2024.

In the first re-insurance stage, EDIS would only provide an additional source of funding to that of the national Deposit Guarantee Schemes (DGS), thereby making a limited contribution to ending the link between banks and their sovereigns. It is therefore desirable to aim for a progressive mutualisation from the co-insurance stage to the full insurance stage.

The reinsurance scheme as designed should pool risks and weaken sovereign-bank links. Ex ante agreement on the shares of national and supra-national funding in depositor pay-outs would limit moral hazard and should be a significant step towards debt mutualisation. However, whether this happens will depend on the political will of several member states. Amid the political controversies, we should remember that the most important issue is the outcome; whether it will address moral hazard and contribute to taxpayers’ safety. Some member states, which had plainly rejected the idea of debt mutualisation through so-called “Eurobonds”, fear that it could indirectly come back under the guise of deposit guarantee mutualisation through what we would coin “Eurobanks”.

National backstops that were used to recapitalize some European banks caused a sharp increase in sovereign indebtedness and helped create the vicious circle between over-indebted sovereigns and undercapitalized banks. Bail-in rules and a common bank-financed resolution fund were agreed to ensure that taxpayer funding of bank bailouts would be minimized in the future, however their use has been already questioned. Several measures, including bank recapitalization, resolution and deposit insurance mechanisms would have more credibility if there were a common fiscal backstop to be used as a last resort. This would increase trust in the whole system, even if the use of DGS is highly unlikely.

A staged approach to EDIS could therefore help to mitigate concerns about greater risk sharing, as should the European Commission’s moves to announce interlinked initiatives that make a full European deposit insurance scheme contingent on measures that would render bail-in more likely. The goals are to make deposits equally safe around Europe, reduce the exposure of banks to sovereigns, and reduce the link between banks and sovereigns. 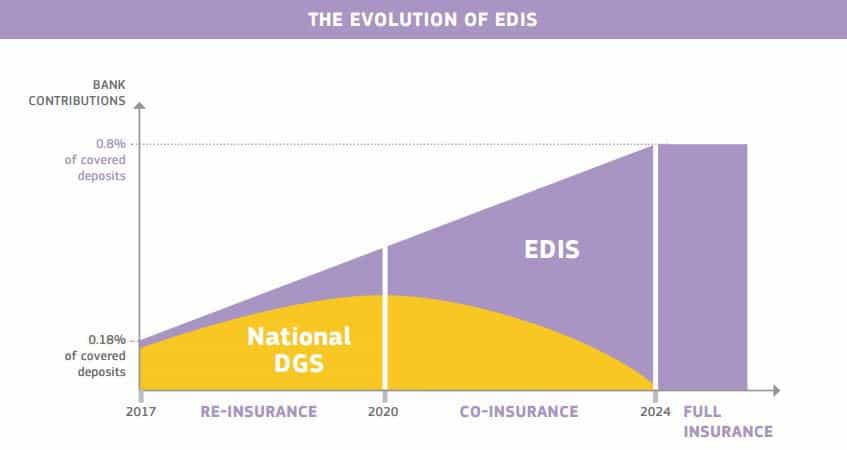 Other measures to restore trust

Deposit insurance is not the only proposal for restoring trust as, more often than in the past, deposit runs have been replaced by market runs. However, the idea of a ‘No bail-out’ clause and the use of bail-in are currently being questioned and tested in Europe. And, as before, we could argue that bank bailouts are the consequence of a series of bad policy choices that will take more to correct than just creating the new institutional set up of the Banking Union. Therefore we need to remember to address decisively the underlying causes of the problem in order to increase the resilience of the sector. Measures for this include:

Without those, Banking Union will not deliver the depositor and taxpayer protection that policymakers seek. It could even make things worse by encouraging moral hazard and creating a false sense of security.