Why should we be concerned?

In the crisis of 2008, we saw how the possible failure of oversized banks can threaten the whole financial system and with it the broader economy. Cutting banks down to size, so that an individual failure wouldn’t menace the rest of the system was one of the clear lessons after 2009. Even the regulators seemed to agree. Ten years later, banks in Europe and elsewhere are still Too Big To Fail. In fact, by some measures, the concentration at the top of the sector is worse than ever. We are a long way from a diverse ecosystem of financial institutions.

The European Central Bank’s consolidated banking statistics show that ‘Large Banks’1 retain over 70% of all banking assets (accounting for just under €25 trillion out of a total of €33.4 trillion of ‘Total Assets’ in 2016). Their average size is almost €700 billion, over 50 times that of medium-sized banks (average of €13 billion). Note that in the diagram below, large banks are shown on the left hand side axis – which is 10x the right hand side axis showing small and medium sized banks. 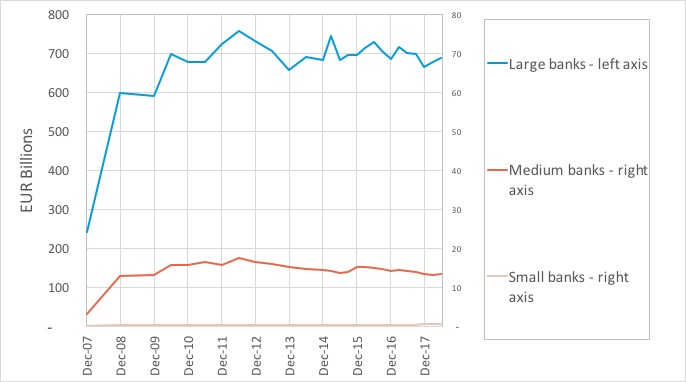 Simply put – we need an end to too-big-to-fail banks. We cannot continue with just a handful of enormous banks completely dominating banking and its regulation. Through carrot and stick, through incentives and hard limits, the largest banks must be shrunk. That can be through splitting them up, for example separating investment banking from commercial banking, or simply reducing some activities, by selling subsidiaries or certain business lines. But shrink they must.

1 Note that the European Central Bank (ECB) definition of Large Banks for their Consolidated Banking Statistics may not correspond to the G-SIBs. For the ECB Statistical Data Warehouse definition see here: https://www.ecb.europa.eu/stats/supervisory_prudential_statistics/consolidated_banking_data/html/index.en.html