Inequality, of wealth and income, remains a core problem in the Europe of 2018 – to say nothing of race, gender and many other axes of inequality and domination.

The European Central Bank’s survey of household finance and consumption details the assets, liabilities and net wealth of households. The data shows that the wealthiest 10% of households own 51.2% of the total net wealth. Even worse, as the diagram below suggests, the discrepancy between the top 5% and the remaining 95% is even starker, and although not shown the top 1% own a staggering proportion of total wealth. Globally, the picture is similar. Oxfam reported in 2017 that just ‘eight men own the same wealth as the 3.6 billion people who make up the poorest half of humanity’– a statistic that is getting worse each year. 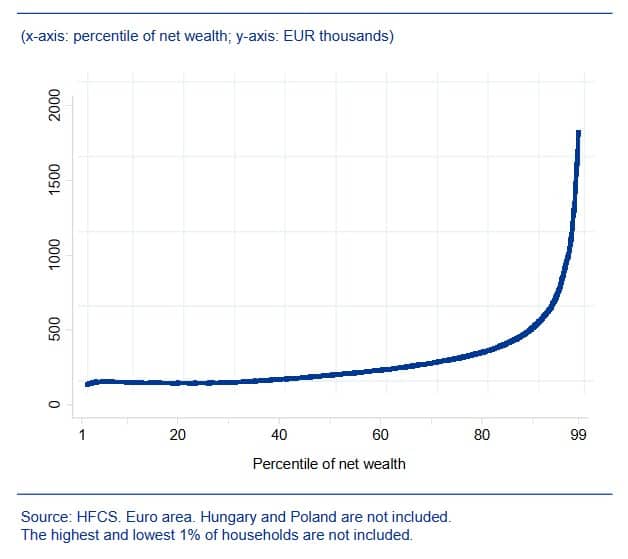 The ECB’s measure does not directly relate inequality to the financial system, but there are many connections between finance and wealth inequality. Wealth is most often held in financial assets, while the poor often have to borrow just to get by. So the wealthiest can earn income from financial assets even without working, while the poorest end up paying interest to the richest. Even middle income households often have financial assets at the same time as financial debts – they effectively pay to lend to themselves (as we see with the indicator household financial entanglement ). Once again, the biggest beneficiaries are the richest few at the top of the financial system, such as hedge fund managers and the owners of financial firms.

The simplest, quickest way to address inequality is to increase tax on the largest, most profitable firms and on the very richest individuals. At the same time, basic goods and services such as housing, education, health and old age provisioning should be available to all without having to pay the, financial system for access. We need more democratic financial institutions, not just in decision making but in wealth and income distribution. You can find more detailed policy ideas elsewhere on the Finance Watch website and on the Change Finance website.