Why should we be concerned?

Debt has a role to play in our economy in pretty much any explanation of the financial system, from Marxists to the mainstream. And in all those explanations, when there is too much private debt things can go very, very, wrong. Something has to give: either the debt has to be forgiven or there will be an enormous bust. Right now, the financial system has driven us into a global debt impasse – we simply have too much debt. In the meantime, while we wait for the explosion, this debt increases inequality and distorts investment decisions, preventing us from making investments for a sustainable future.

The Bank for International Settlements collects debt information from all over the world. It calculates that, in 2017, there was over $110 trillion worth of private debt outstanding, even before we include the trillions that financial institutions owe each other. The records begin at the turn of the century and show a steady rise, with barely a pause for breath in 2008, and certainly no sign of slowing since. Note that they count most but not all countries around the world, the major economies are included. 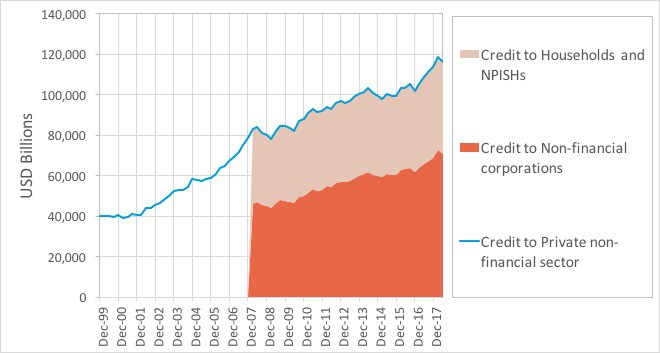 Source: Bank for International Settlements – Credit to the non-financial sector

First, we need to tackle the underlying causes of the staggering growth in private debt. One major axis is to arrange the provision of basic needs such as housing, health, transport and education without individuals having to go into debt. Second, we will need to actively manage existing debts through a combination of debt jubilee or forgiveness, and through defaults. This will mean that banks, still the core of debt creation in the economy, will need to be able to withstand losses. The financial elites that have made so much money out of the last 30-40 years of financialisation will need to stand ready to absorb some losses.