The EC’s proposal on bank structure reform aims to reduce government support for investment banks by making large banks place their financial trading activities into a separately capitalised subsidiary. This relatively simple step would stop the benefits of implicit government support for the retail bank from leaking across into the investment bank. This leakage is what happens now (see diagram) and helps to explain why investment bankers can be paid large bonuses; it is similar to an indirect subsidy. The leakage lies at the root of many problems in the banking sector – cultural, economic, competition – as well as contributing to financial instability. Stopping the leakage is therefore the right objective: 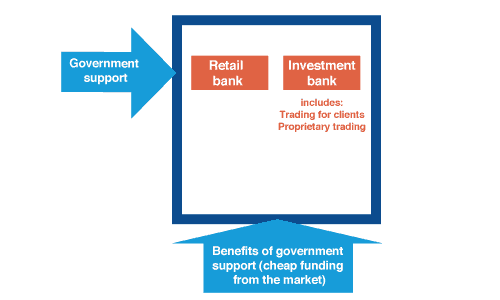 The second good thing about the EC’s proposal is that it gets the right target: it aims to separate nearly all trading, including the biggest elements such as market making, securitisation and derivatives trading. This is much better than the approaches taken in the US, France and Germany, which concentrate mainly on proprietary or “prop” trading, which is when a bank trades on its own account instead of for a client. This is a very small part of the activity of most banks, perhaps as little as 1-2%. 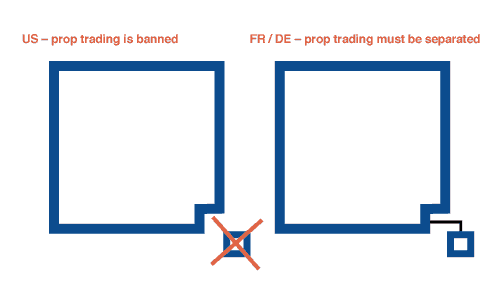 But the EC’s mechanism for separating banks is fragile because it relies on the judgment of supervisory authorities to implement the separation and that judgment can depend on many factors, including lobbying or political pressure. This is not comparable to a situation where separation would be automatic. 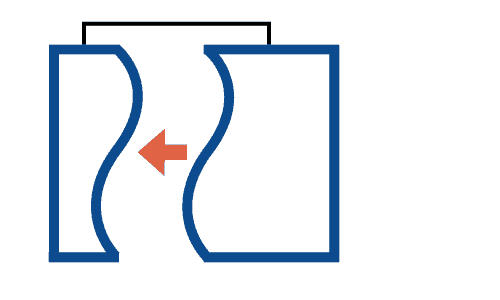 The EC proposal creates a power of separation that must be used “by the competent authority” only if all the conditions in the regulation are satisfied. One of these conditions is that the bank’s balance sheet structure must be judged to pose a threat to financial stability. We run the risk that unless there is a financial crisis in the air, most big banks will have a reasonable chance of escaping this condition, especially if the competent authority is vulnerable to pressure when it makes its judgement. 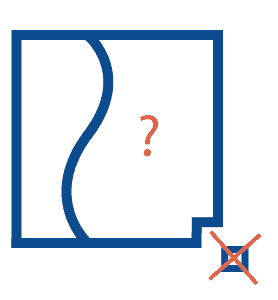 EU – prop trading is banned, other trading may be separated:

So in the end, whether separation occurs or not will depend to a large degree on how the competent authority exercises its discretion. The impact of the EU’s proposal will depend on the attitude of bank supervisors: it could have a significant impact if supervisory authorities apply the letter of the text strictly but, if supervisors are too complacent, it could also have no more effect than banning a small amount of prop trading and leaving the EU’s biggest banks as they are today:  free to enjoy government support for all their activities – including financial trading.