The last 30-40 years have seen a shift from public to private provision. This shift has been one of the major drivers of the rise of finance, creating an ever more powerful financial sector. One of the many problems with this shift is that it is reducing democratic control over how we live, what gets built and how we prepare for the future. As private capital grows, it is increasingly short-term financial returns that decide what gets built, and not elected politicians and other democratic bodies. Our society, steered by financial returns, is out of control and hitting the rocks of a twin social and environmental crisis.

Net public and private wealth (as a multiple of national income) 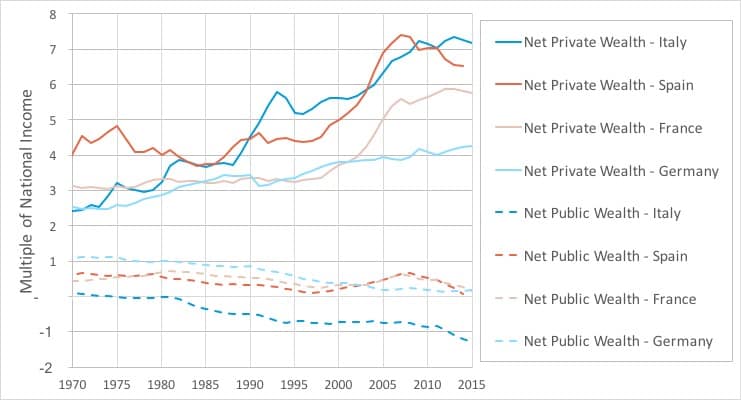 Private wealth minus public wealth (as a multiple of national income) 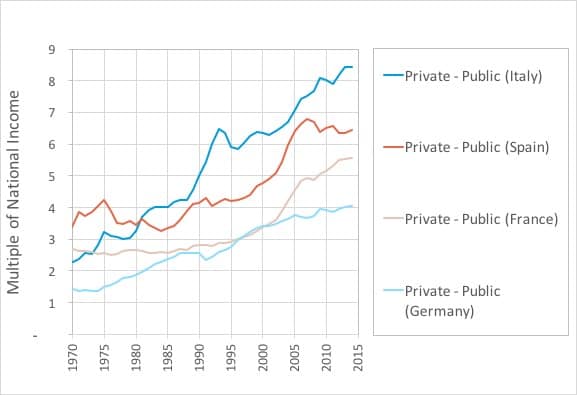 The World Inequality Database provides a measure of this shift from public to private- by measuring public and private wealth as a multiple of national income. In Europe since 1969 we can see a relentless increase in private wealth and decrease in public wealth. This is illustrated by the four major economies of France, Germany, Spain and Italy, where the excess of private over public wealth has grown by 2.5 to 3.5-times national income in France, Germany and Spain, and over 6-times in Italy.

The core problem is one of provisioning for basic needs, from housing to health and old age. Private provision, paid for with a tribute to the financial system, should be replaced by a rise in pay-as-you-go public, associative and social provisioning. There should be an end to privatisation and a reversal of state outsourcing. While we should avoid a nostalgia for simple state ownership we need to move to democratic forms of ownership so that society can take back control of provisioning. You can find more detailed policy ideas elsewhere on the Finance Watch website and on the Change Finance website.