Photo by loic lextrait on Unsplash

In its important Final Report, published on 31 January, the High-level Expert Group on Sustainable Finance reflected on the conditions for introducing a ‘green supporting factor’. At Finance Watch, we question the wisdom of this policy measure, which could easily turn into a gift for banks. In our view, the European Commission should look at other tools to ‘green’ the EU’s credit supply instead while preparing its Action Plan on sustainable finance in the coming weeks.

It’s an interesting idea to give banks capital relief for lending to green projects. Among other things, it invites an overdue discussion about how banks allocate credit. But the mechanics of a green supporting factor make it a step in the wrong direction. It would do little for the environment and would leave the banking system weaker.

The idea of a green supporting factor is to give banks capital relief for their green lending by applying a discount to the risk weights that apply to green loans. Banks could then fund those loans with less loss-absorbing equity than they would otherwise. This means more bank leverage, one of the main factors in the global financial crisis. 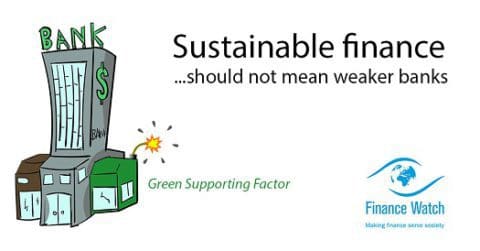 European Commissioner Valdis Dombrovskis suggested introducing a green supporting factor in a speech in December, presenting it as a way to incentivise green lending. In its Final Report, the HLEG on Sustainable Finance steered a careful course, neither rejecting nor endorsing the idea but reflecting on the conditions to make it effective.

Others have rejected the green supporting factor in very clear language. It is an “irresponsible” proposal, says the Bruegel think tank. And it could even damage the reputation of sustainable finance, according to the LSE Grantham Institute. Like them, we dislike the supporting factor idea, but we like the direction of travel.

Taking a step back, we have to give the Commissioner credit for drawing attention to the need for more public oversight over how banks allocate credit. Individual lending decisions that make sense at bank level can add up to large imbalances at a macro level, giving us serious problem such as housing booms and a green funding gap. There are very few tools for policymakers in this area but Dombrovskis’s proposal opens the door to a much-needed discussion about credit guidance. Who knows where it will lead, and what benefits could result?

The Commissioner also dared to challenge the almost religious belief among many bankers, academics and regulators that risk weights should be “pure and accurate”. Risk-based capital measures failed utterly to protect taxpayers in the last crisis.For all their purity and bogus precision, they discourage useful risk-taking and do nothing to protect against unpredictable risks. Most sensible investors ignored banks’ risk-based capital adequacy ratios completely when the crisis was in full swing in 2008. Simple leverage proved a far better indicator of the risk of bank failure, and it still is. Could risk weights serve a more useful purpose, such as green credit guidance? It’s a provocative thought.

Regardless, a discount to risk weights is a bad way to promote green credit. Evidence suggests that you would need to make quite large changes to risk weights to have any effect on bank lending decisions. In cases where they have been tried, sector-specific risk-weight adjustments of 25% in both directions have had little or no impact on lending, including the EU’s experiment with a supporting factor for loans to SMEs.[1] Increases of 50% to 150% have had more success in reducing some types of lending, suggesting that discounts of a similar magnitude may be needed to boost green lending.[2]

Would it really be wise to halve the capital requirements for green loans? If this measure were applied to residential mortgages that already benefit from capital reliefs under securitisation rules, banks could create mountains of debt with very little capital indeed. This is surely a road to crisis.

European banks have been strong advocates of a green supporting factor. The SME supporting factor allowed them to reduce their capital by nearly EUR 12bn.[3] That is small across the whole sector but for some banks every extra basis point of leverage is a bonus (sometimes quite literally).

The evidence above shows that a green supporting factor would have to be large to have any impact. And if it were large, it would allow banks to increase their leverage, which would hurt financial stability. The green supporting factor idea thus puts two legitimate public interest objectives – greener finance and safer banks – in opposition.

Luckily, this is an easy dilemma to avoid. There are better ways to promote green finance that do not weaken banks. One is to raise risk weights for fossil fuel assets, which would strengthen banks and discourage lending for fossil fuel activities. For society, if not for banks, a fossil fuel penalising factor is a win-win outcome. The idea was floated by Dombrovskis’s Director General at DG FISMA, Olivier Guersent, in a speech to the Bruegel think tank last year and has won broad support, including from some enlightened banks, such as Triodos.

In addition to a fossil fuel penalising factor, the Commission could investigate ceilings or quotas on fossil fuel credit, carbon taxes, liquidity support and guarantees for green loans, and subsidies to green economy borrowers, among others. There is no shortage of options.

As for the green supporting factor, it has prompted some useful questions about credit allocation that deserve further discussion, but it is probably time to put the proposal itself in the bin and concentrate on safer, win-win options for society instead.